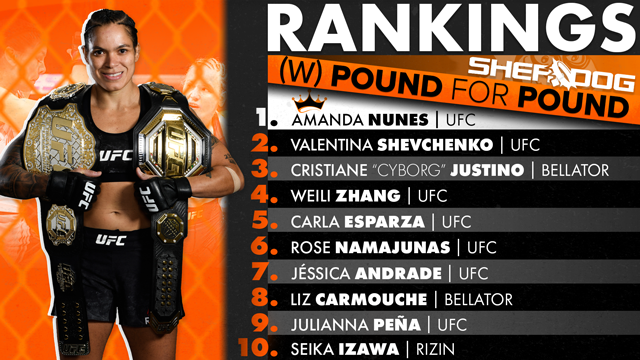 
Jessica Andrade was frightening in her brutality.


Advertisement
“Bate Estaca” submitted an early candidate for 2023 “Beatdown of the Year” at UFC 283, as she battered Lauren Murphy for three lopsided rounds in their flyweight clash on Saturday in Rio de Janeiro. After the victory, the Brazilian indicated that a return to 115 pounds is in the cards, as she called for a rematch with reigning strawweight title holder Weili Zhang.

Only time will tell whether that request comes to fruition, but what remains clear is that Andrade is the quintessential definition of a pound-for-pound stalwart with triumphs in three different divisions and notable wins over the likes of Rose Namajunas, Larissa Pacheco and Raquel Pennington over the course of her career. For now, Andrade stays put at No. 7 in the women’s pound-for-pound poll, but rematches with the likes of Namajunas or Zhang could give her an opportunity to improve that status in the coming months.

Shevchenko survived the most difficult title defense of her career to date, edging Taila Santos via split decision in the UFC 275 co-main event at Singapore Indoor Stadium in Kallang, Singapore on June 11. For much of the bout, “Bullet” struggled against her Brazilian foe in the clinch and on the mat, but the reigning flyweight queen got stronger as the fight progressed to earn her eighth victory in a UFC championship bout. Shevchenko will attempt to make her eighth successful title defense when she meets Alexa Grasso at UFC 285.

It took a little bit longer than their first meeting, but “Cyborg” nonetheless improved to 2-0 against Arlene Blencowe with a unanimous decision triumph in the Bellator 279 main event at Neil S. Blaisdell Arena in Honolulu, Hawaii, on April 23. The reigning featherweight queen has won six straight since her shocking loss to Amanda Nunes in December 2018 and still looks to be head and shoulders above the 145-pound field in Bellator. A potential cross-promotion with the PFL for a superfight with Kayla Harrison would be quite intriguing, though it lost some luster when Harrison fell to Larissa Pacheco in the PFL lightweight final on Nov. 25. In the meantime, “Cyborg” enjoyed a successful professional boxing debut in September.

Andrade earned a dominant victory in her return to flyweight, as she battered Lauren Murphy for three brutal rounds in a unanimous decision triumph at UFC 283. “Bate Estaca” has won four of her last five promotional outings, all while showing the ability to be successful in two different weight classes. After her latest triumph, Andrade indicated a return to strawweight is imminent, where she will pursue another championship reign through a rematch with Weili Zhang.

After a controversial stoppage tainted her championship-winning triumph over Juliana Velasquez in April, Carmouche authored a more emphatic victory in the rematch at Bellator 289, overwhelming her adversary with pressure, clinch work and takedowns en route to a second-round armbar at Mohegan Sun Arena in Uncasville, Conn. “Girl-Rilla” has won five consecutive contests since joining the California-based promotion, and her reign atop the Bellator flyweight division helps to erase the sting of failed title opportunities in two different weight classes in the UFC.

Izawa completed her run through the Rizin super atomweight grand prix on New Year’s Eve, when she garnered a hard-fought split verdict over Si Woo Park at Rizin 40 in Saitama, Japan. Izawa keeps her undefeated record intact and improves to 2-0 against Park, whom she also defeated via unanimous decision at Deep 104 Impact in October 2021. With a resume that now includes wins over Park (twice), Ayaka Hamasaki (twice) and Miki Motono (twice), the 25-year-old Tokyo native strengthens her position atop the atomweight rankings and remains one of the top females in the sport, regardless of weight class.