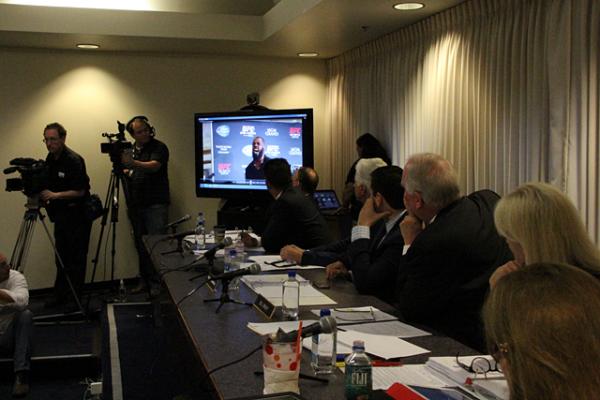 
Sherdog.com’s Mike Sloan is present at Tuesday’s Nevada Athletic Commission hearing inside of Las Vegas’ Grant Sawyer complex, and is providing a live blog of the happenings.

Expected to be addressed at Tuesday’s hearing are topics surrounding Wanderlei Silva and his punishment for allegedly skipping out on a drug test, Jon Jones-Daniel Cormier potential punishment for their parts in a wild press conference brawl and accusations against Floyd Mayweather, Jr., involving unsafe gym practices and marijuana use seen on Showtime’s “All Access.”


• The disciplinary complaint against Robert Drysdale has been shelved. The vote was unanimous from the commission.


• Right now the Commission is ruling on Bellator MMA's request to hold an event outside at Sam Boyd Stadium in conjunction with the Monster Energy Drink Cup event on Oct. 18.

• It was granted immediately, as expected. 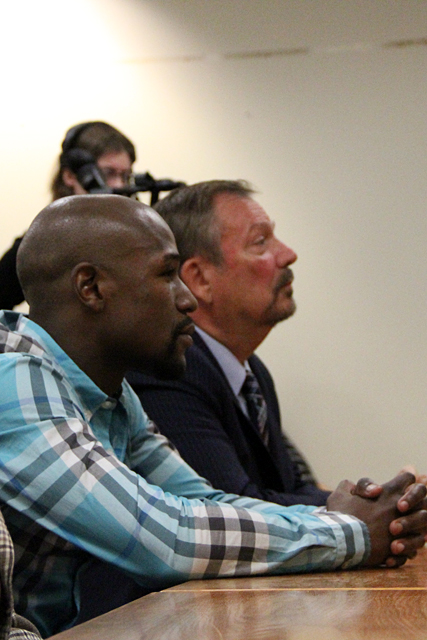 (+ Enlarge) | Photo: M. Sloan/Sherdog.com
Mayweather had some explaining to do.
• Floyd Mayweather has just appeared before the Commission. He is not being disciplined per se, but more or less a discussion about what he said on the “All Access” show.

• And also what he and his team did on the All Access show regarding marijuana. Mayweather just said that what happened on the show was “The Money Team” did and was purely entertainment. The show made it seem as though Mayweather doesn't let his teammates -- who are training hard -- take any breaks and are forced to work as hard as possible. TMT has dubbed the gym the "Dog House" but Mayweather said it's more for show than anything. He said that he oversees everyone while they are training and that other experienced coaches make sure everybody is safe.

• Floyd said that he and his team make sure everybody is protected and everything that goes on inside the ring is protected. He doesn't allow lightweights to spar heavyweights, for example.

•Commission Brady just intervened and praised Mayweather for how he runs his gym because he stated that he has been there unannounced dozens of times and has said that he has never seen anything untoward. He said it's the smoothest gym he's ever attended and that what he saw on TV was the opposite of what he's always witnessed in the gym.

• Commissioner Lundvall is questioning the type of headgear they used on the show.

• Lundvall is now grilling Floyd about the marijuana used on the show. Mayweather is claiming that it was all fake, that the marijuana was all props. He wanted to change things up on the show, to attract new fans and to be "outside the box."

• Floyd stated that he does not condone the use of marijuana at all.

• Lundvall is asking him about his knowledge of marijuana and that the NAC prohibits it. Mayweather said he understands completely and again said it was all for show

• Mayweather says that he makes all his fighters submit random blood and urine tests in his gym because he wants his entire team clean.

• The Commission is basically kissing Mayweather's butt now; nothing worthwhile for the past several minutes.

• With all the controversy surrounding Mayweather's latest All Access show with alleged gambling, marijuana use, mistreatment of the fighters, etc., Floyd and his legal team reassured them it was all for show. Commission Avensino and Aguilar requested that TMT at least give the NAC a head's up as to what will air on the show in the future so that there is no more hearings in the future. 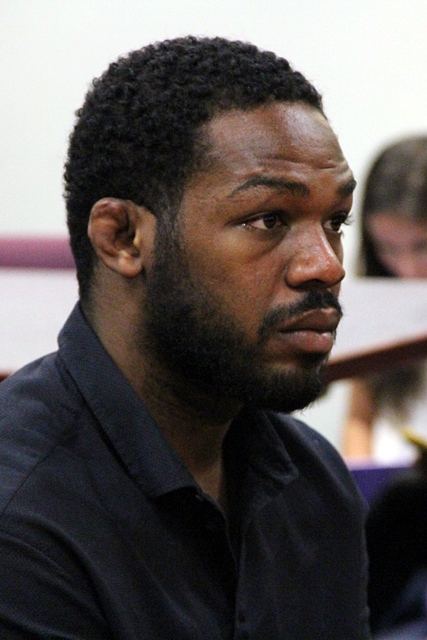 • The Commission is questioning him about his brawl with Cormier at their stop on the press your at the MGM.

• The commission just turned a TV showing footage of the brawl.

• Jones looks extremely uncomfortable watching the video. He appears to be ashamed of his actions. His lawyer is now asking the commission for leniency in terms of a fine and/or suspension. He is being sworn in because he is about to give an official statement to the NAC.

• Jones is very apologetic while speaking to the commissioners.

• He said he is embarrassed and he feels as though he let down his own fans, Daniel Cormier's fans, the muay Thai community, the jiu-jitsu community and the UFC. He said it was a heat-of-the-moment thing and he reacted poorly.

• He stated that it was completely out of character for him and he is deeply remorseful for what he did.

• Lundvall just asked Jones what he thinks his punishment should be. Jones was caught off guard and paused before answering. He said he already lost a sponsor and lost another, potentially more lucrative business partner because of it. He didn't quite answer the question, saying that he preferred to not disclose the amount of money he lost with the Nike deal he had. His attorney said that legally he can't reveal the Nike deal's monetary agreement because it's supposed to be confidential, only stating that it was a six-figure deal that he lost.

• Commissioner Brady has expressed his concerns about these types of face-offs because of these brawls that can potentially break out. He said he is disappointed with Jones' behavior in the fracas, but elaborated that he is pleased with Bones' demeanor in this meaning and believes his contrition,

• Jones said that in the future, he will give Cormier distance the next time they are in the room together and admitted that he doesn't need to actually face-off with him.

• Commissioner Brady is thoroughly pleased with Jones' response and agrees that giving his nemesis enough space is a terrific idea.

• Commissioner Avensino is recommending some sort of suspension and a fine.

• The commissioners are continually and mistakenly referring to the brawl occurring during their weigh-in.

• The commissioners are debating on what sort of punishment should be inflicted onto Jones.

• The UFC light heavyweight champion is very nervous while listening to the commissioners debate. He is anxious and it's clear he just wants this disciplinary meeting to be over.

• Commissioner Brady is showing some displeasure with the fact that Dana White was not present during the time of the brawl. He argued that if White was at the MGM that day, this skirmish may not have happened. However, Brady just stressed that he is not blaming Dana or the UFC; he is blaming the fighters.

• Brady is recommending not to suspend and fine Jones. He feels as though Jones has learned his lesson and because he lost such a large endorsement, that's enough. The other commissioners don't feel the same way.

• They are discussing fines, charitable donations, community service for kids, etc. Jones is very anxious as he sits and listens. The champ is not allowed to speak while the commissioners continue to deliberate.

• The commissioners are stating their embarrassment for how a previous MMA fighter handled his punishment (likely Chael Sonnen) and that they have lost any softness in their hearts to "go easy" or "the slap the wrist" of another MMA fighter this time around.

• It's official. The punishment for Jon Jones is as follows: Fine of $50,000; 40 hours of community service within the Las Vegas valley; it has to be with teens and children regarding anti-bullying methods; he and the UFC will have to verify his commitment and completion of said services; he has to perform all the duties before they can allow him to fight again inside their jurisdiction. 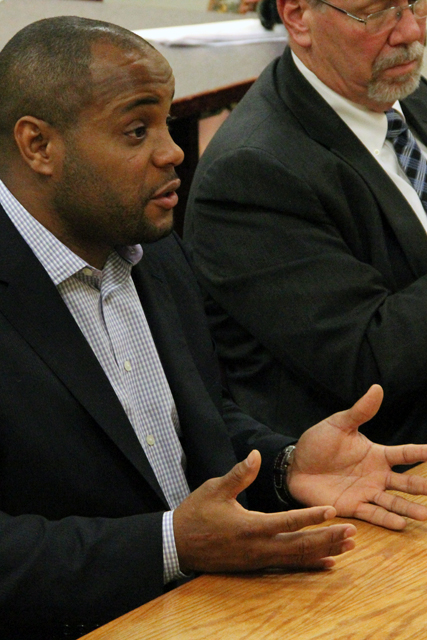 • Cormier's attorney is claiming that his client's involvement was based solely on self defense, and that he was merely defending himself from Jones' attack.

• Cormier, according to his legal council, feels that he was assaulted at the MGM on that day.

• Cormier is now explaining the long history he and Jones have had together. He is detailing how he was at heavyweight a few years ago and decided to eventually drop down to light heavyweight to fight for the title. He stated that Jones confronted him at a UFC event and said that he (Jones) wants to fight him (Cormier). That's where all this tension stems from.

• He now stated that Jones was the instigator of the fracas at the MGM, and that had Jones not gotten in his face and pressed his forehead onto Daniel's, this whole thing wouldn't have happened. He admitted that he shoved Jones when their heads touched but that Jones' punch was much worse than the shove.

• Commissioner Avensino again referred to the brawl happening at their "weigh-in."

• Commissioner Lundvall asked Cormier if, knowing what he knows now, would he "do it again," referring to defending himself against Jones. Cormier said because of the looks he's gotten from kids and his own son, he would not do it again.

• Lundvall asked if it was a different opponent other than Jones and the same thing had happened, what would he do? Cormier stated he would give his opponent plenty of distance and that he would not engage with him, thus preventing a brawl.

• Cormier said because of the brawl, he's lost about 10 kids from his youth wrestling/anti-bullying camp he has following the brawl with Jones. He said that means more to him than money because he has let those kids down.

• The NAC is asking him to detail his wrestling/fighting history and he is now doing so.

• Cormier is detailing his views of what transpired during the brawl. He revealed that he was to earn $90,000 for the Jones fight with undisclosed bonuses provided he won.

• Daniel admitted that he easily could have and should have just backed up when Jones confronted him and that it would have saved him, the UFC, Jones, and the NAC tons of grief in the process.

• Cormier said "it sucks" when he disappoints those around him and that his behavior disappointed many people around him.

• Cormier revealed that he and Jones were cordial beforehand and that he actually introduced Jon to his fiancée. Once Jones got in his face, it took him totally by surprise.

• The commissioners are now deliberating the potential punishment for Cormier.


• Silva is not present at the hearing.

• The NAC has denied Wanderlei Silva's request to dismiss his case. Silva has chosen not to be here because he is still down in Brazil.

• The commissioners are not pleased that The Axe Murderer is not here and that he was given ample time to make arrangements to attend.

• The commission is deliberating on Silva's fate and it seems like they are going to ban him from being licensed in Nevada.

• The commission is vocally displeased that Silva couldn't bother to even make an appearance via telephone.

• It seems likely that the Nevada Athletic Commission is going to drop the hammer down on The Axe Murderer.

• The commission is not buying that Silva has retired at all. They are fearful that he'll simply un-retire and fight someplace else.


• UFC fighter Kevin Casey is being questioned via telephone about his positive urine test for a banned substance. He's claiming he needed to drop weight quickly and that the substance he took wouldn't show up on a test.

• The commission is claiming he lied on his pre-fight questionnaire to commission regarding knowingly taking a banned substance. He is apologizing for his mistake. Deliberation has begun.

• It has been noted that Casey got $8,000 to show and then received an additional $8,000 for the TKO win. His failed urinalysis for the banned anabolic steroid. He is officially fined 35 percent of his total purse and a one-year suspension. He needs to submit a clean urinalysis when he is eligible to become re-licensed.