Antonio Silva was a heavy underdog on Saturday against Fedor Emelianenko. | Dave Mandel/Sherdog.com


History was made Saturday night at the Izod Center in East Rutherford, N.J. Following an undercard that went as expected, most anticipated former Pride Fighting Championships heavyweight champion Fedor Emelianenko to bounce back from last summer’s shocking upset loss with a win over Antonio “Bigfoot” Silva.

However, the sport of MMA has evolved such that things rarely turn out as expected, and “The Last Emperor” was no exception. Below, an in-depth look at the five main-card matches from Saturday night and what matches could be next for the participants.

What happened: Having been in charge of Vitor Belfort’s preparation for UFC middleweight champion Anderson Silva, seven-time K-1 World Grand Prix finalist Sefo did not have much time to prepare for his Strikeforce heavyweight grand prix alternate bout against Alistair Overeem’s older brother, Valentijn. Still a neophyte on the ground, Sefo was taken down 90 seconds into the match and submitted with a head-scissoring Overeem neck crank. It must have been the first time someone fighting for a major organization tapped out to the “can opener” since Mark Coleman used it on Masaaki Satake in the opening round of the 2000 Pride grand prix.

Forecast for Overeem: The “Python” will likely continue to fight as an alternate in the tournament as he helps his “little” brother prepare for his April rematch against Fabricio Werdum. Logical next opponents would be fellow reserve bout winners Chad Griggs or Shane del Rosario. However, despite 88 bouts and a similar career road between them -- competing for Rings, Pride, and now Strikeforce -- Overeem has never faced Fedor Emelianenko. Should the “Last Emperor” return to the tournament, a fight and possible win over Valentijn would nicely set up a clash with brother Alistair.

Forecast for Sefo: The future for “Sugarfoot” likely includes passing on his vast knowledge to up-and-coming martial artists and continuing to teach muay Thai at Xtreme Couture in Las Vegas.

What happened: In the highest-octane round of heavyweight action in recent memory, Bobby Lashley upsetter Griggs and Ring of Combat heavyweight champion Villante traded furious blows in their grand prix reserve match. Just as Villante seemed to gain the upper hand with a pair of high kicks that had Griggs reeling, referee Yves Lavigne called for a poorly-timed break to replace Villante’s mouthpiece. Griggs, whose ear popped like a water balloon from one of the kicks, came after Villante with urgency upon the restart, dropping him with a pair of stiff right hands and forcing a stoppage with ground-and-pound against the fence.

Forecast for Griggs: Having dispatched of two touted prospects in his first two Strikeforce outings, the “Grave Digger” deserves a shot at one of the organization’s bigger names -- someone not in the tournament, such as Mike Kyle (possibly at 205 pounds), Daniel Cormier or Del Rosario.

Forecast for Villante: Weighing in at just 227 pounds, the smartest choice for the 25-year-old New Yorker would probably be a drop to light heavyweight. Fights against Ron “Abongo” Humphrey, Antwain Britt or Ovince St. Preux could await him there. 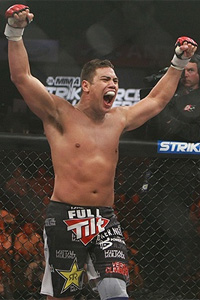 What happened: For half a round, fight fans unfamiliar with the work of Del Rosario wondered what all the fuss was about, as the 26-year-old Californian kickboxer was taken down and pounded on early by Johnson. The Colin Oyama student also ate some hard knees and punches standing up, but Del Rosario showed his versatility, taking down Johnson and mounting him quickly. After softening his opponent up with punches, Del Rosario slapped on the fight-winning armbar with 29 seconds left in the first round.

Forecast for Del Rosario: If Fedor decides to hang up his gloves, Del Rosario should become the No. 1 alternate for the Strikeforce heavyweight grand prix. If his services are not needed, a matchup with Mike Kyle could be fun. Strikeforce could also take a page from the UFC playbook and match Del Rosario up with fellow unbeaten prospect Cormier.

Forecast for Johnson: This fight unsparingly showed Johnson’s weakness: the ground game. If he can fix that, at least to the degree that he can stay out of submissions, the big striker may still have a few solid years ahead of him. Style- and appearance-wise, Valentijn Overeem would be a fun opponent for him.

What happened: Following an embarrassing 2009 loss to Jeff Monson and a knockout at the hands of kickboxer Singh Jaideep in late 2010, most experts had written off former Pride FC star Kharitonov as a serious heavyweight contender. After a vicious knockout that may send former UFC champ Arlovski into retirement, the former Russian Airborne Troop is right back in the mix to win the highest-profile heavyweight tournament in years.

Arlovski started off well as usual, displaying his smooth boxing technique, while Kharitonov made it no secret from the opening bell that he came to take the Belarusian out. Kharitonov, himself a former Russian national boxing championship silver medalist, cornered the “Pitbull” on multiple occasions. Arlovski’s fragile chin held up during the first couple of onslaughts, but midway through the round, Kharitonov once again backed him into a corner and worked him with uppercuts and knee strikes. A curved right hand hit the backpedaling Arlovski on the button, and the subsequent ground-and-pound turned out his lights.

Forecast for Kharitonov: Sergei will face the winner of the April 9 fight between Josh Barnett and Brett Rogers. The semifinals could take place as early as June.

Forecast for Arlovski: With four straight defeats, three of which have come by way of devastating knockout, it is probably time for the “Pitbull” to hang up his gloves and focus on acting full time. He already starred in “Universal Soldier: Regeneration” alongside Jean-Claude Van Damme and Dolph Lundgren in 2009.

What happened: Was it age that caught up with Fedor? Was it his desire to prove that he is still No. 1 that waned? Did he simply not have the hunger for one more great run? The fact of the matter is that Emelianenko, the former undisputed top heavyweight in MMA and possibly the greatest fighter to have ever lived, lost. He did not get caught. It was no fluke. Fedor was simply beaten down and properly stopped after eating a barrage of Silva’s plate-sized fists.

The “Last Emperor” did start off well, hurling the bricks attached to the ends of his arms into Silva’s face, but the Brazilian behemoth did not flinch. Midway through the round, Bigfoot attempted to slam his way out of a Fedor guillotine attempt. Emelianenko defended the throw and went to work from half guard, attempting the same kimura that he used to finish Kevin Randleman and Mark Hunt, but Silva powered out of the hold and got back to his feet. With 10 seconds to go in the first round, Silva took down the Russian in a portent of things to come in the second stanza.

In the next round, Silva wasted no time in taking Fedor down again. Bigfoot used his 55-pound weight advantage wisely, landing heavy blows from top position. Silva passed to side control, north-south position and ended up mounting the living legend with 3:35 to go. After raining down punches for a minute, Silva attempted an arm-triangle choke, which Fedor survived on sheer willpower.

With 90 seconds left in the round, both men were exhausted. In the final moments, Silva rolled for a kneebar, prompting Fedor to counter with a leg lock of his own. Neither man was able to pull off the fight-ending submission before the bell. Between rounds, the New Jersey State Athletic Control Board’s cageside doctor advised referee Dan Miragliotta to stop the contest due to Emelianenko’s right eye being completely swollen shut.

Forecast for Silva: Bigfoot will face the winner of April 9’s Alistair Overeem-Fabricio Werdum fight. The semifinals could take place as early as June.

Forecast for Emelianenko: In his post-fight interview, Fedor strongly hinted at retiring from the sport of mixed martial arts. There were rumors that Emelianenko wanted to quit after his loss to Werdum, and that M-1 Global CEO Vadim Finkelchtein talked him into continuing his career. Emelianenko does have two fights remaining on his contract with Strikeforce, but that also most likely contains a retirement clause. Only time will tell what is next for the Last Emperor.