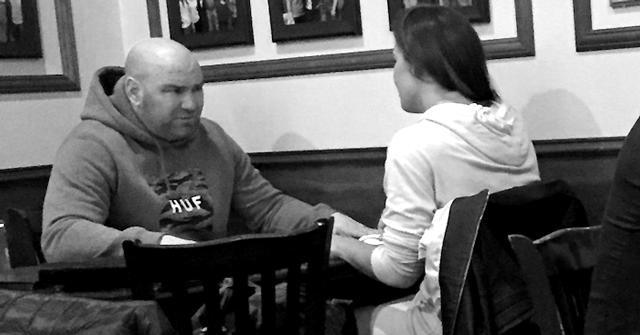 With the New Year upon us, we at Sherdog.com wanted to reintroduce ourselves to all of you. In this Q&A piece, the Sherdog staff weighed in on five questions about themselves and their histories with the great sport of MMA. Joining us is the entire editorial staff, as well as our excellent contributors from all around the globe. These talented writers and fans of the sport gave us each a little peek behind the curtain.

1) What one combat sports figure would you would have dinner with if given the chance?

Kyle Barrowman: Ken Shamrock. Aside from being my all-time favorite fighter, I would just love to talk to him about the early days of MMA, and in particular about the early (secretive and still to this day mysterious) days of Pancrase. To hear his behind-the-scenes stories about coming up in the Japanese professional wrestling circuit and initially training with and then competing against legendary figures like Masakatsu Funaki and Minoru Suzuki, forming the Lion’s Den, competing in and becoming an early champion of both the Ultimate Fighting Championship and Pancrase – not to mention his additional behind-the-scenes stories from the Attitude Era of the WWF – would be incredible. He has lived and experienced such a historic life/career that I can only imagine how many fascinating stories he has to tell.

Jason Burgos: It’s a tossup between two talented pugilists, and one I actually did interview for a short spell this past spring. The first would be Daniel Cormier, and it’s (as my kid would say) “obvi” because he is Daniel-Freakin-Cormier. The man is one of the greatest ever. But, what makes Cormier special, and I felt it a bit at the post-fight presser for UFC 230, is there is a welcoming warmth to him. Meaning, despite his legendary status, he would likely make this regular ‘ol MMA journalist feel like a long-time friend.

The other would be Chael Sonnen. I spoke with Sonnen at the media day for Bellator 222, and he too has a very welcoming aura. However, it comes with a humorous charisma that is quite enchanting. Plus, I have to get all the details on the basement training session he told me about between himself and Georges St. Pierre years back. I would also find out why that session made him believe “Rush” is the most talented fighter he ever competed against, even over legendary former opponents Jon Jones, Fedor Emelianenko and Anderson Silva.

Edward Carbajal: Bas Rutten. He's in the "pioneer" wing of the UFC's Hall of Fame, but I always saw him as the first modern fighter, a strong striker that was hungry to learn wrestling and submissions. He's a Kyokushin karate guy that knew he had to add to his toolbox of skills, and it inspired me as an Ishin-Ryu practitioner to add Brazilian jiu-jitsu to my own training. I know he's a grandfather now but I also know he used to have a good time.

Tristen Critchfield: I’ve never been one to be enamored with celebrity, so I’m going to go a little outside the box and share a table with retired UFC matchmaker Joe Silva. Assuming this meal will include candid conversation, I think Silva would have some of the best insight and most interesting anecdotes regarding the formative years of the largest promotion in mixed martial arts. During his tenure with the UFC, Silva largely preferred to remain behind the scenes and rejected most media inquiries. That, too, plays a big role in my choice.

Ben Duffy: I’d go with Elvis Sinosic. As a pioneer of Oceanic MMA—he fought on the very first modern Australian NHB card and was the first Aussie to fight in the UFC as well as the first to fight for a UFC title—and MMA Twitter’s most vocal advocate of eating lots and lots of steak, I can only imagine the stories and the food would both be stellar.

Mike Fridley: I would be honored to have a steak and a few lemonades with Kazushi Sakuraba, the best personality MMA has ever witnessed.

Tudor Leonte: If I had the chance, I’d love to have dinner with Gina Carano. She has Italian origins, so I’d definitely take her to eat some spaghetti alla carbonara and taste some fancy Prosecco while listening to some of Adriano Celentano’s songs. We would talk about her career, we would blame Cristiane Justino all night for inflicting the only defeat on the lovely Carano’s record and we would also discuss her recent role in "The Mandalorian." Next time she comes to Italy, I definitely have to ask her out. After asking Kevin Ross’ blessing, of course.

Jay Pettry: Instead of picking an active or retired fighter, I would opt to sit down with Art Davie for the good part of an evening. One of the creators of the UFC, an executive at K-1 USA and also the man behind the legendary sport XARM? The stories would be unlike any we could hear elsewhere, and it would serve as an inside look behind the curtain at how these kinds of organizations get off the ground. It would be a way to learn from a man involved from the very beginning how the sausage that is MMA was made, and I am genuinely curious if he in his wildest dreams believed what he put together all those years ago would turn into what we have today.

Keith Shillan: Daniel Cormier. He has a great personality, appears to be someone that is easy to talk to, and obviously can throw back a beer or two.

Mike Sloan: If this question is for living or dead, I would pick the late, great Henry Armstrong, who I consider the greatest pound-for-pound boxer in history. However, since this is most likely for combat sports figures who are still breathing, I would have to go with “Marvelous” Marvin Hagler. He’s the only elite all-time great boxer from the 1980’s whom I haven’t yet met, and he’s always been one of my all-time favorites.

Anthony Walker: I’d probably sit down with Gene LeBell. The stories he’d share on his friendship with Bruce Lee, choking out Steven Seagal, and his mixed-rules bout with Milo Savage would be fantastic. Even though his mind is probably packed to the brim with useful insights on hand-to-hand combat, I wouldn’t go in expecting a lesson to be applied at the next training session. Instead, I’d just enjoy the moment. A medium rare steak, whiskey on the rocks, and fun conversation with “Judo Gene” sounds perfect.

Next Page » Your Song