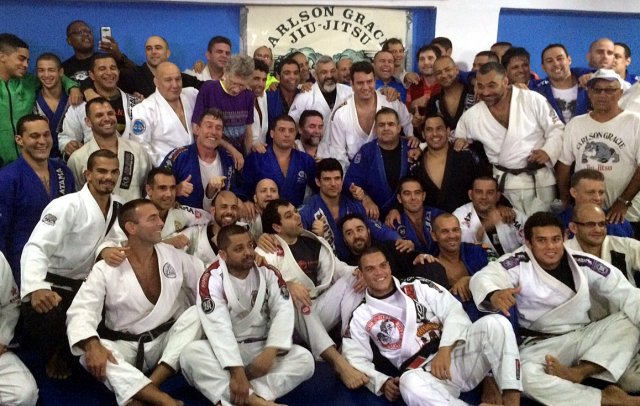 
RIO DE JANEIRO -- When Carlson Gracie died on Feb. 1, 2006, the fate of his jiu-jitsu academy in Brazil was left in the hands his wife, Marly, the mother of his two sons, both of whom live in the United States: Carlson Jr., who leads a school in Chicago, and Karen, who resides in Los Angeles.

Even with Marly’s considerable efforts and those of trainers Ari Galo and Marcelo Saporito, the Gracie dojo spent the last eight years struggling to make ends meet. The academy closed its doors on Aug. 25.

“It’s a request of my mother, who cannot run the school anymore due to health reasons and the fact that I live in the USA,” Carlson Jr. told a group of more than 200 students who came to participate at the final training session at the gym. The session was scheduled for 7 p.m., but the dojo was completely full by 6 p.m. There was not a sad vibe present. Instead, the meeting was marked by joy and celebration, as four generations of students transformed the atmosphere.

“Many people know Carlson for being the Gracie who avenged Helio [Gracie] against Waldemar [Santana] and defended the family name for more than 20 years, but he was the one who transformed jiu-jitsu from an elite’s sport into a popular art, producing [nearly] 100 black belts,” said an emotionally moved Orlando Saraiva, a representative of Carlson’s first generation of students. “In that dojo, poor, rich, crazy and intellectuals received the same treatment from Carlson.”

Jiu-jitsu benefited immeasurably from Carlson’s decision to open his gym in 1972 following his retirement from competition. He was viewed by his uncle, Helio, and most of the Gracie family as something of a black sheep. However, his amazing capacity to recognize a potential champion and train him to beat the Gracie Academy’s best students touched off a rivalry that forced jiu-jitsu to evolve as a martial art.

Carlson’s brother, Reyson, was present on the final day of training and remembered the dojo’s first days. At 74, the ninth-degree red belt is the second-oldest living Gracie behind Robson, father of Renzo.

“When that academy was opened in 1972, Carlson taught in one dojo and Rolls in the other,” Reyson said. “They built many champions. If you look at MMA and jiu-jitsu nowadays, some of the best schools in MMA and jiu-jitsu have the DNA of my two brothers.”

“Of course, we get sad to see a place that means so much to our history being closed,” he said. “On the other hand, I have no doubt the Carlson’s legacy is endless. The fact is wherever there’s a jiu-jitsu practitioner, there will always be a piece of Carlson Gracie.”

Liborio was accompanied by former World Extreme Cagefighting champion and Pride Fighting Championships veteran Paulo Filho. He tried to put into words why Carlson’s team was so successful for decades.

“Our training was so tough that anyone here would die in competition to represent Carlson’s name,” Filho said. “It was the same in vale tudo and jiu-jitsu. It was a question of honor.”

“Carlson had a feeling when he saw a champion, and he always valued not only talent but also a big heart,” Bitetti said. “He hated chickens, so he used to split the training in two dojos in order to avoid the champions being contaminated by the chicken virus. It may sound funny, but it worked well, as we can see.”

The farewell meeting was not exclusive to Carlson students. Gracie Barra, Nova Geracao, Brazilian Top Team and Gracie Humaita all had representatives on hand. People traveled from Chile, Japan, America and Canada to attend. The only sad moment came when Carlson Jr. requested a moment of silence for his father. Antonio “Apaga Vela” Santos, Carlson’s best friend, broke the silence and cried out: “Carlson is here with us. He will never die.” Carlson Jr. then sliced through the grief with an invitation.

“Next year, 2016, marks 10 years since my father’s passing,” he said. “He had problems with some of his students but that is now part of the past, so I urge you to once again fight under the Carlson Gracie flag at the 2016 IBJJF Worlds Masters. Let’s go there and win another championship in his honor to prove the Carlson Gracie Team is still the best.”

Liborio was the first to accept: “I’m in.”


The first son of Carmem and Carlos Gracie, Carlson was born in Rio de Janeiro in 1933. His father had learned jiu-jitsu directly from Mitsuyo Maeda, and as such, Carlson grew up on the mat following the lessons and training of his father and his uncle, Helio.

“When I was 2 years old,” Carlson once remembered, “my father told me I gave a demonstration that was a big success.”

At a time when vale tudo was an anything-goes competition and the use of gloves, rules, weight classes and time limits were not even on the radar, Carlson learned to read by recognizing the last name printed on city newspapers -- thanks to his uncle’s impressive victories against national and international fighters. Having essentially started training right out of the cradle, Carlos Gracie’s oldest son started drawing attention at the Gracie Academy. When he was 15, Carlson impressed everyone with his determination, talent and toughness. 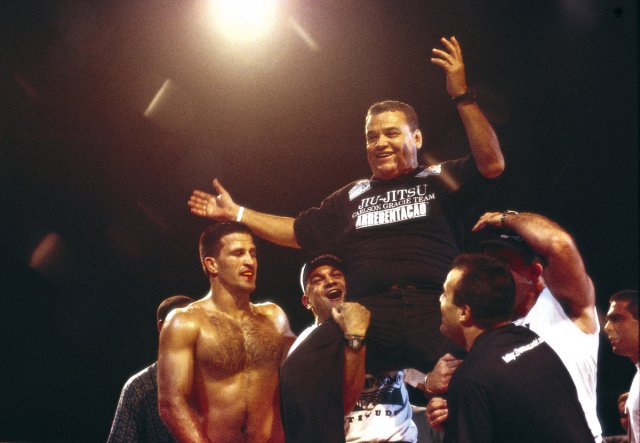 (+ Enlarge) | Photo: M. Alonso/Sherdog.com
Gracie’s impact cannot be overstated.
“Carlson was good on the top and on the bottom,” said Pedro Hemeterio, 10 years Carlson’s elder and one of the oldest students of the Gracie Academy.

At 17, Carlson made his vale tudo debut in a difficult fight opposite capoeira player Cirandinha, who outweighed him by almost 70 pounds. Despite the apparent disadvantages and the fact that the bout took place on a concrete slab, Carlson needed only four minutes to win. The media started pointing to him as Helio Gracie’s probable successor.

“At the time, I wasn’t even 18 yet, so my father did a ‘trick’ to allow me to fight,” Carlson said. “We fought and I fell with my back to the ground, but I hit him in the face from the guard. Then I mounted and forced him to tap out with a sequence of punches.”

According to Carlson, he did not make his debut in an actual ring until he faced judo, luta livre and boxing champion Passarito in what was then the world’s largest soccer stadium: the Maracana in Rio de Janeiro. “The man was 96 kilograms of pure muscle, and I was only 72 kilograms,” Carlson said. Back then, the ring was mounted behind the goal at the stadium, and it was there that Carlson and Passarito fought for nearly an hour. The fight ended without a winner.

“At the time, there were no points,” Carlson said. “Either you won by knockout or submission or the fight would end in a draw.”

Carlson showed his “heart of a lion” for the first time against Passarito, as he fought through a broken collarbone.

“He threw me in the first minutes of the fight, and I broke the bone,” he said. “That’s why I had to use a sling for almost 90 days.”

Carlson was not happy with the draw and pushed for a rematch, demanding changes to the rules. The second fight would consist of 30-minute rounds and would last until there was a winner or one of the fighters quit. Without a time limit, it was difficult to beat the technique and toughness of the oldest son of Carlos Gracie, who had a total of 21 children with three different wives.

“The fight lasted about two and a half hours,” Carlson said. “When the fifth round finished, he could no longer walk. I had beaten him badly, and the doctor didn’t allow him to come back. He went straight to the hospital, where he stayed for two weeks and almost died. I went to visit him, and he recovered after two months.”

The media recognition made Carlson famous and attracted a number of challengers. One by one, he submitted them. In his fourth fight, the “Leao de Portugal,” or “Lion of Portugal” was his victim.

“The man was very weak, and I did not want to hurt him,” Carlson said. “I put him down, mounted, took the back and choked him.”

By the time he reached his fifth fight, a trilogy match with Passarito, Carlson was at the height of his power. In a bout scheduled for three 10-minute rounds, Passarito surrendered in between the second and third frames.

Carlson’s fame crossed the Atlantic Ocean and led to two European fighters challenging him in Rio de Janeiro newspapers. Armenian Martin Karadagian was first in line. He did not last one round.

“I mounted, I gave him a sequence of punches and I caught him by the neck,” Carlson said.

A match with Frenchman Jean Monier came next. Monier was the only opponent Carlson faced that was lighter than him. He lasted only 50 seconds.

“I gave him an uchi mata,” Carlson said, “and he fell with his head on the ground and fainted.”


When Carlson was anointed as Helio Gracie’s natural heir by the press, a misunderstanding between his uncle and Waldemar Santana, a pupil of the Gracie Academy, interrupted Helio’s retirement on May 24, 1955. The fight went down in history as the longest fight in vale tudo history. Almost 70 pounds heavier and 21 years younger, Waldemar knocked out his teacher with a kick to the face that rendered him unconscious.

Only 22 at the time, Carlson was the first to enter the ring. He carried his uncle on his shoulders to receive medical attention.

“Uncle Helio was a hero to stand in there with Waldemar for three hours and 45 minutes,” Carlson said in the final interview before his death.

After Santana’s victory, the press, which at the time had an enormous admiration for the Gracie family, set the stage for the next fight. Carlson had no choice but to confront his friend.

“I told him, ‘Waldemar, I like you very much, but you’ve created a problem for me by fighting my uncle,’” he said. “‘Take care, because in the ring, we will be enemies and I will kick your ass.’”

Finish Reading » “The gym seemed like a hostel. Carlson was a genius in the art of training. He used to tell us we were the missile and the opponents were the target. He waited for the other fighters to enter in the competition to define who would fight; and we rocked. I saw a lot of timid fighters become brave by his hands. I didn’t have money or any place to live. He let me train and live there for free. I owe him everything.”
« Previous Video: Benson Henderson’s ‘Terrible Performance’ Next Grappling Coverage: ADCC 2015 Day 2 Results & Play-by-Play »