Amid the usual stream of Zuffa-promoted shows and happenings, Dream chugs along with its latest offering on Tuesday from the Saitama Super Arena in Saitama, Japan.

Dream 6 features the semi-finals and final of the Dream middleweight grand prix and an undercard loaded with some of the best and brightest mixed martial artists the promotion has under contract.

Because Japan refuses to accept the idea that MMA tournaments seem to have been cursed by every witch doctor in Louisiana, Dream offers a middleweight grand prix that should produce three quality scraps.

Why he’ll win: Generally, if you put Manhoef in any sort of enclosed area with someone willing to slug it out with him, the Dutch destroyer will likely end up lining the pockets of a maxillofacial surgeon somewhere thanks to his penchant for turning faces into modern art displays.

Mousasi possesses some all-around skills that could give Manhoef’s one-dimensional style some issues. However, should he elect to test the action standing, Mousasi will soon discover that there may not be a middleweight alive not named Anderson Silva who can survive an exchange with the “Marvelous” one.

Why he’ll win: Likely the most versatile of the remaining four middleweights, Mousasi is a capable striker and grappler who seems to have a knack for knowing when to employ each of the disciplines.

The key here for Mousasi is to keep this from turning into a remake of “Kill Bill,” with the Armenian serving as one of the bit players who gets his limbs flayed off. If Mousasi can control the tempo on the feet and score a takedown, he will have Manhoef right where he wants him.


The bottom line: As with any bout involving Manhoef, this prediction comes with the disclaimer that if Mousasi temporarily goes insane and tries to strike with his explosive foe, he will discover just how dangerous the Dutchman can be.

Barring any stress-induced psychosis, Mousasi should be able to weather a short storm standing before securing a takedown and cinching a submission on Manhoef’s always available appendages. 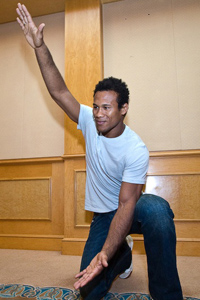 Why he’ll win: Another striker who has dominated tournament competition thus far, Galesic is best known as a Mirko “Cro Cop” Filipovic’s understudy. Much like his mentor, he is an athletic striker with an uncommon style that meshes together the flashy kicks of his tae kwon do background with the Spartan efficiency of traditional Muay Thai.

Considering Jacare’s mediocre striking and unproven chin, their bout boils down to whether or not Galesic can keep the fight standing long enough to expose Souza’s most glaring weakness.

Why he’ll win: Already one of the world’s elite submission wrestlers, Jacare is rapidly becoming one of the best grapplers in all of MMA. Having rebounded from a disastrous debut against vale tudo legend Jorge Patino in 2003, he has reeled off nine straight wins in dominant fashion.

Just about anyone, Galesic included, is dead to rights when they hit the ground with Souza, who rules the mat like Emmanuel Yarborough rules the buffet.


The bottom line: As much as Jacare’s suspect striking game seems like a ticking time bomb waiting to undercut his potential, Galesic lacks the takedown defense to do much of anything once Souza shoots.

Jacare’s takedowns and grappling are just too much for the one-dimensional strikers who populate this tournament. Count on Jacare winning the grand prix.