Depending on the native language of the fan, the perception of Mirko "Cro Cop" Filipovic varies widely. For some, he’s an overhyped expatriate of obscure Japanese fight culture. For others, he’s possessed of the most talented lower body -- glutes, quads, the ever-popular hamstring -- next to Pele.

For those weaned on Filipovic’s exploits in Japan from 2001-06, HDNet’s broadcast of Dream 6 on Tuesday provided further depressing evidence that the once-feared Croatian is nearing the end of his tenure as a heavyweight threat. Battered by inconsistent Alistair Overeem, “Cro Cop” has not made a significant move since winning Pride’s open weight tournament in 2006.

He’s one of several attractions that have struggled in recent months to restore sheen to careers and make corrections to obvious faults in tactical preparation. At age 34, Filipovic’s problems don’t seem the result of physical deterioration. He’s simply an older make of athlete that needs an upgrade in order to remain competitive with today’s crop of licensed killers.

A sampling of fighters, formerly on top, who could use a diagnostic evaluation at the violent offenders ward of the Mayo Clinic:

Abstract: Former UFC light-heavyweight champion who possessed near-unbeatable combination of superior striking and a hydraulic piston of a core; impossible to take or keep down. Punted heads with regularity.

Diagnosis: New year, same game plan. Lost Tyson-esque aura of supremacy when Quinton "Rampage" Jackson dropped him in May 2007; lost next fight to an unfazed Keith Jardine. After rebounding with an exciting win over Wanderlei Silva, he lost for a third time in four fights to Rashad Evans via a synapses-shattering KO.

Content to load up with right hand; sedimentation of agility is allowing opponents (Jackson, Evans) to react and counterstrike with finality. 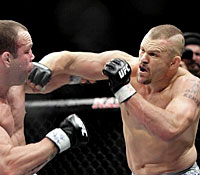 Photo by Sherdog.com
Could Chuck Liddell benefit from
a move to heavyweight?
Treatment: Liddell’s preference to stand and trade has made formulating a counter offensive almost academic. There are no variables to consider, other than his penchant for looping rights and uppercuts. To challenge that strategy, Liddell might consider taking the “anti” out of his wrestling and keep fighters cautious about a possible takedown. Otherwise, they’re free to dig in and land all-body shots.

Never a big kicker -- aside from the oral surgery on Renato "Babalu" Sobral -- he needs to think about going high.

If speed continues to be an issue, Liddell might want to consider the sport-tested tradition of shuffling weight classes in order to provide a fresh start. As a heavyweight, his reaction time won’t be as pressured, and he has a crop of superfights from which to choose.

And while trainer John Hackleman has been instrumental in Liddell’s career to date, it’s unusual for an athlete to maintain success under the same training regime for years on end -- the body grows bored, even if the mind does not. Liddell won’t distance himself from Hackleman, but bringing in new strategists and supplementing Pit training with a routine from another gym could help thaw him out a bit.

Has looked disinterested and uninspired in recent showings; easily dissuaded by pressure strikers who keep him backpedaling; criticized for having a “weak chin” when struck by behemoths Gonzaga and Kevin Randleman.

Treatment: Filipovic has been fluffed as the “sport’s best striker” for so long that his respect for opponent’s own evolving skills might be at low ebb -- that’s a more likely explanation for his two highlight-reel losses than having a hollow-core jaw bone. Treating a stand-up fight like he considered his opponent as capable a striker as himself might avoid any future embarrassments.

Since a common tactic against Filipovic is to get him retreating, it might be best to work on the kind of clutch response that made Liddell so dangerous. When chased, Filipovic should avoid the instinct to regroup, stabilize and instead learn to launch an effective attack by shifting gears.

And what happened to his takedown defense? Once a demoralizing issue for opponents, he’s been content to give them up with regularity. If the current model of “Cro Cop” is working as heavily on sprawling as he did in the past, he sure hasn’t shown it. 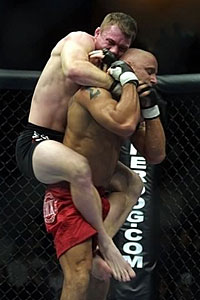 Jeff Sherwood/Sherdog.com
Once considered one of the most
dominating fighters on the planet,
Hughes has been overtaken by
younger, faster welterweights.
Matt Hughes
Age: 34

Abstract: UFC President Dana White’s “greatest welterweight of all times [sic],” and he’s not far off. Hughes has beaten more quality opposition and stayed on top longer than virtually anyone has relative to their weight division. Mediocre stand-up, but combination of wrestling with legitimate grappling and lethal positioning -- check out his crucifix on B.J. Penn in their second fight and try not to wince -- made him mat hell for anyone.

Diagnosis: Consecutive losses to Georges St. Pierre signaled a changing of the guard. A loss to Thiago Alves indicated Hughes’ problems may not be solely Canadian in nature. Younger, more explosive athletes are now able to resist his clinch and shots and punish him standing.

Treatment: Hughes isn’t getting slower: the welterweights are just getting younger and faster -- Alves is only 25. Hughes can still do incredible damage from on top, but he’ll need to work on a regimen that supports explosive movements and possibly adopt a better upper-body game to tie up hands.

Moreover, the Alves and second St. Pierre bouts came after Hughes left longtime mentor Pat Miletich's gym in favor of his own closer to home. Commuting is a pain, but iron sharpens iron. Does leaving the communal mat of Miletich’s gym -- which had more gold per square inch than Fort Knox -- result in reduced efficacy?

Diagnosis: Has dropped three of his last four bouts to top-five in the division -- Randy Couture, Antonio Rodrigo Nogueira, Fedor Emelianenko. Awkward off of his back; no lateral movement.

Treatment: Sylvia’s advantages -- size and reach -- aren’t something that can be taught, so he’s got the genetic upper hand the moment the fight starts. Aside from the Vera fight, he rarely uses the clinch to tie up more problematic and aggressive strikers (Emelianenko). And apart from some early bouts under circus tents, he never goes for a submission. Why not try the occasional triangle with those fence-post legs?

Abstract: Pioneering grappler who parlayed a considerable physique and charisma into several main events and a World Wrestling Entertainment stint; an important figure -- and not always for the right reasons -- in the UFC’s formative years.

Diagnosis: Owns a 2-8 record going back to 2000, including five consecutive KO or TKO losses; demonstrable development of a “glass chin,” whereupon opponents can render him briefly unconscious before he pops up to complain; no apparent inclination to shoot in and take the fight to where he stands the best chance of winning; a first-generation fighter currently trying to swim with fourth-generation athletes. [Con. on five pages following.]