Following several knees to the cup of the Croatian and a yellow card for the final infraction, the main heavyweight attraction of Dream 6 was halted as a near-capacity crowd at the Saitama Super Arena looked on disappointed.

“It was a mistake to make earlier in the fight,” said Overeem. “I wanted to finish ‘Cro Cop’ in a KO or a submission in a fair way. I trained really, really hard for this fight.”

Overeem (28-11, 1 NC) dominated Filipovic from the sound of the bell, scoring with takedowns and vicious hooks to the body from the top position in guard. While on their feet, the Dutchman scored to the midsection with knees from the clinch.

The heavy-hitting Golden Glory fighter opened up cuts near both eyes of the Pride 2006 open-weight tournament champion. He looked close to finishing the beaten-down Filipovic when aim became an issue.

Two right knees slammed the groin protector of Cro Cop, and time was given for the fighter to recover. After a break lasting several minutes, Overeem went right back to the clinch, where he lifted his opponent off the floor with a left knee to the cup.

Filipovic (23-6-2, 1 NC) laid on his back for several minutes until referee Yuji Shimada announced that the bout had been ruled a no contest midway through the first period.

Fresh off a shocking loss to Joachim Hansen back in July in the final round of Dream’s lightweight tournament, Brazilian jiu-jitsu black belt Shinya Aoki had an easy time with Todd Moore, submitting the overwhelmed former WEC fighter with a neck crank at 1:10 of the first.

A standing Aoki (18-3, 1 NC) found himself on the back of Moore (9-3) in the corner, where he used a rear-naked choke position to push the chin down and force a tapout.

In a battle of Japanese UFC veterans, Hayato Sakurai outpointed Kuniyoshi Hironaka after two rounds to claim a unanimous decision. Entering the final minute of the second stanza, the fight was very much up for grabs as both fighters traded punches in the center of the ring. 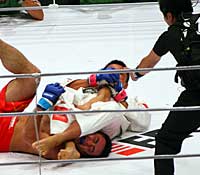 Daniel Herbertson/Sherdog.com
Yoshihiro Akiyama submits Masanori
Tonooka with an armbar.
A well-timed right hand counter from Sakurai (33-8-2) deposited Hironaka (12-6) on the canvas, sealing the deal for the former Shooto champion as he landed punches to the head until time expired.

With fellow countryman Fedor Emelianenko looking on from ringside, Russian slugger Sergei Kharitonov dismantled Jimmy Ambriz with a torrent of punches en route to a submission victory early in the first frame.

Fighting on 72-hour notice after Siala “Mighty Mo” Siliga was forced off the card due to injury, Ambriz offered nothing in terms of offense or defense as Kharitonov landed at will with straight rights to the body and heavy hooks to the head from both hands.

After Kharitonov was issued a yellow card for grabbing the ropes following an Ambriz (13-10-1) double-leg attempt, a series of heavy punches found their target, prompting the American to avoid further punishment by dropping to his knees, where he tapped out at the 2:15 mark.

The win for Kharitonov (16-3) was his third consecutive conquest since dropping a disappointing clash to Aleksander Emelianenko in September 2006.

Yoshihiro Akiyama (12-1, 2 NC) needed only 6:26 to dispatch of Dream newcomer Masanori Tonooka (1-2) with a slow-developing armbar.

Akiyama blanketed his outmatched opponent from the onset with takedowns and tight positioning, often looking to wrap his trademark gi around the neck of his foe. The end unfolded as the Olympic gold medalist set up the finishing technique from the mount.

Atsushi Yamamoto used a slick jab and smooth foot movement to pepper Hideo Tokoro for 15 minutes on his way to claiming a hard-fought unanimous decision.

Yamamoto, 12-5-1, nearly saw his efforts go to waste in the final minute of the duel, as Tokoro (21-14-1) secured the left arm of his opponent and worked for an armbar. Yamamoto gripped his exposed arm and ultimately held on to capture the win.

In his third bout since returning from a seven-year exodus from competition, Masakatsu Funaki made quick work of Ikuhisa Minowa with an inverted heel hook at 0:52 of the first.

Wearing shoes, Minowa (40-29-8) caught a spinning-back kick attempt and deposited his opponent on the canvas in the opening seconds of the bout. Funaki immediately went for a heel, which Minowa countered with a foot lock of his own.

Funaki, 39-14-1, inverted his hold on the shoe of Minowa, and forced a scream and a tapout to the painful technique.