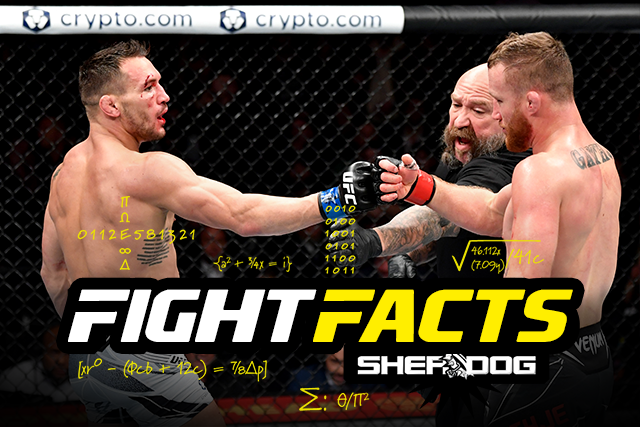 The Ultimate Fighting Championship told the pandemic to hold its beer as it staged a higher number of events than in recent years, putting on over 500 fights from start to finish. U.S. fans came back in droves for several marquee shows as early as April, but the UFC Apex in Las Vegas played host to most of the action this year. In this all-encompassing Fight Facts review, join us as we dive into the non-stop chain of UFC cards over the past 12 months, which brought more knockouts than ever before, at least one all-time upset, and a wide spread of entertaining walkout music.

I Back, Trust Me, I Back


509 What What: Throughout the year, the UFC held 509 fights inside of eight different buildings, spanning 43 events. The event and bout total both came in as the second-most in any year in UFC history, with only 2014’s 46 events and 2019’s 516 fights trumping each category.

There’s No Place Like the Apex: Whereas in the previous year 10 different venues held UFC cards, in 2021 only eight, including the UFC Apex, put on fights. Three-hundred fifty-five, or 69.7%, of all UFC fights in 2021 went down in the Apex. While not the highest percentage of bouts for one arena in a year, it does eclipse the total number in a single locale.

A Las Vegas-Based Conveyer Belt: The UFC broke its 2020 record of consecutive events in the same building when 10 straight shows from Feb. 6 to April 17 went down in the Apex. The previous high was eight, also in the Apex.

Hometown Cooking: Thirty-one of the 43 UFC events in 2021 took place in the promotion’s headquarters at the UFC Apex in Las Vegas. This is by far the most fight cards from a major promotion in a single arena in a year.

Home of the Whopper: The UFC started the year with three shows at the Etihad Arena in Abu Dhabi, United Arab Emirates, and then returned nine months later for UFC 267 in October. “Fight Island” marked the only non-U.S. location the UFC traveled to this year, although it only planted its flag in four other U.S. cities of Jacksonville, Fla.; Houston; Glendale, Ariz.; and New York City.

Legend Whether You Like Him or Not: At UFC 268 in November, announcer Bruce Buffer hit an astonishing milestone: the event was his 500th on the microphone. The second-highest tally goes to Joe Martinez, whose 14 appearances this year bring his UFC total to 61 shows.

It Was Exhausting: With a full slate of 15 fights from start to finish on March 6, UFC 259 tied the all-time record for the most bouts in a night with UFC 2 and UFC on ESPN 20. It was the first of those with a championship bout, and it featured two.

A Literal Three-Hour Tour: Even though it fell short of the record for total bouts with just 14, UFC 263 ended with 11 decisions, setting a new all-time mark. The evening’s fight time of 3:19:32 also surpassed the previous record by a fair amount.

Missing Four on the Floor: Fewer than the last two years, just four fighters stepped foot in the Octagon four times in 2021. Belal Muhammad, Dustin Jacoby, Lupita Godinez and Manel Kape all reached that number by year’s end. Godinez and Kape each won twice, while Muhammad saw three victories and a no contest compared to Jacoby’s three triumphs and a draw.

Three and Out: No UFC fighter earned more than three victories this calendar year. Overall, 19 different competitors prevailed on three occasions in 2021.

Could Have Been Worse: There were no fighters this year that fought four times without recording a win. Three athletes did drop three bouts in three 2021 appearances: Andre Ewell, Diego Ferreira and Jerome Rivera.

Go Over the Rules Again: 2021 became the fourth year in UFC history where multiple matches ended by disqualification, along with 2012, 2015 and 2020. Petr Yan lost his bantamweight belt to an illegal knee to Aljamain Sterling, while Randa Markos hurt Luana Pinheiro with an illegal upkick to halt that match as well.

No Poppers, Bro: A sharp contrast to the year the preceded it, only one match was later overturned to a no contest due to a failed drug test, when Rodrigo Nascimento was suspended for banned stimulants. The other five no contests came from accidental eye pokes, an illegal knee or an inadvertent clash of heads.