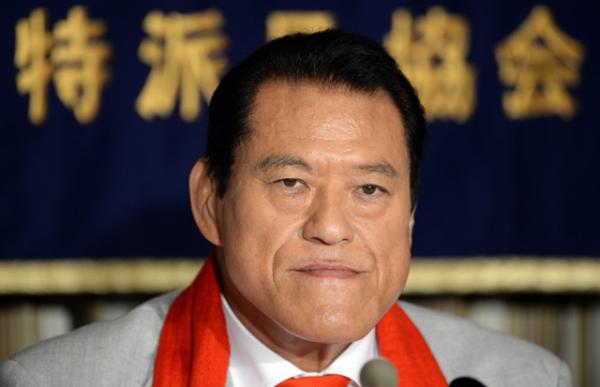 No one has been more involved in Japanese MMA than Antonio Inoki. | Toshifumi Kitamura/AFP/Getty Images


When it comes to reviewing the last 20 years of history on the Japanese MMA scene, there is one name predominantly involved from start to finish: professional wrestling legend Antonio Inoki.

To understand the modern history of Japanese mixed martial arts, one must look at its past. After World War II, Gen. Douglas McArthur led Japan through its Reconstruction period. America had a choice to make during the rebuilding process; either turn a blind eye to the yakuza -- organized crime -- or allow an infiltration of Chinese communists to control the political climate of the country. Naturally, the yakuza won. Nationalistic pride trumped all. From Reconstruction came Rikidozan, the modern-day hero of Japanese professional wrestling. Rikidozan’s top rival was famous judoka Masahiko Kimura. The two men fought in a legendary match in which Riki pulled a “cement” on Kimura and seriously surprised the legitimate fighter with his own actual fighting skill. Kimura had beaten Helio Gracie in a real fight, and his submission hold is today referred to as a kimura in his honor.

Rikidozan’s top two understudies in the wrestling business were Inoki and Shohei “Giant” Baba. Both traveled throughout the world, but Baba philosophically stuck closely to a happier, more traditional version of professional wrestling. Inoki was most interested in proving how strong pro wrestlers were in the combat sports landscape. Baba knew the lines and did not cross them. Inoki not only crossed lines but blurred them on purpose, inside and outside the ring. The combination of network television support and yakuza business muscle created a winning combination.

Everyone points to Inoki’s match with Muhammed Ali on June 26, 1976, at Tokyo’s Nippon Budokan as a historical turning point for combat sports -- and for good reason. The quality of the fight itself became secondary to the fact that Ali basically faded away after the fight; it is even often hypothesized that Inoki’s curious leg kick attack from his back did serious damage to the boxing legend’s knees. Inoki got what he wanted and all of the worldwide attention that came with a pro wrestler fighting in “mixed matches.” Inside the dojo of Inoki’s New Japan Pro-Wrestling operation, many of the wrestlers participated in their own versions of shoot fights behind closed doors to determine the toughest wrestler. 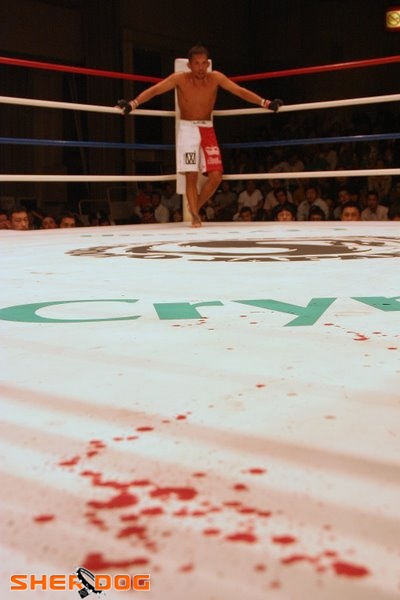 Photo: Sherdog.com
Sayama (not pictured) founded Shooto in 1985.
When Inoki faced a scandal crisis in his own company, he was temporarily kicked out in a coup d’état involving Japanese broadcaster TV Asahi. The iconic Satoru Sayama, the original Tiger Mask, soon left, along with some other wrestlers, to form the Universal Wrestling Federation. The UWF portrayed itself as dojo wrestling, basically mimicking more of what a real submission fight would look like. After the first UWF, Sayama went on to create the Shooto system, arguably the most productive and stable Japanese MMA entity in history. The UWF, meanwhile, was wildly popular and controversial. It was hotly debated as to whether or not the UWF was really a New Japan-owned satellite or truly independent. There was eventually a second incarnation of the UWF featuring New Japan wrestlers such as Akira Maeda, Nobuhiko Takada, Minoru Suzuki and Masakatsu Funaki. After the second UWF died in early 1991, the various wrestlers split apart into different groups.

His top ace was Kiyoshi Tamura, a popular baby face who was carefully protected. Rings blurred the line between worked and real fights during Maeda’s tenure, but when Maeda began to wrestle more infrequently in 1997, he shifted the promotion toward having more real fights. When Maeda retired in 1999, Rings launched its King of Kings tournament series: 32-man brackets featuring some of the greatest fighters of the day. These tournaments also produced the likes of Dan Henderson and Antonio Rodrigo Nogueira; the last champion of Rings was Fedor Emelianenko. Yeah, that guy.

Funaki and Suzuki went on to become the building blocks for a revolutionary promotion called Pancrase. It was also a mixture of real and worked fights. Pancrase attracted some major names like Ken Shamrock, Frank Shamrock and Bas Rutten. While the Ultimate Fighting Championship was starting in the United States, Japan was witnessing its own MMA boom. Some of the top fighters in the UFC were fighting in Japan and vice versa. Tsuyoshi Kohsaka, who did not become a household name for Rings, was a force in the UFC during the late 1990s.

Kazuyoshi Ishii, a socialite in karate circles, launched K-1 in 1993. K-1, with backing from Fuji TV and Nippon TV, Japan’s two largest broadcast networks, produced luxuriously over-the-top kickboxing shows at major stadiums like the Osaka Dome. Since kickboxing was easy enough for the masses to understand and digest, K-1 started growing in popularity even with a roster largely comprised of foreign stars.

Takada, along with other UWF refugees, formed UWF International. The organization became wildly successful and created its own version of the pro wrestling heavyweight championship, with the endorsement of Lou Thesz. There were crazy fights involving the likes of World Championship Wrestling’s Vader, Gary Albright and Dan Severn. There were even shoot incidents in the ring involving former boxing world champion Trevor Berbick and disgraced former Sumo star and UFC veteran Koji Kitao.

In 1994, the brain trust behind Shooto created a fighting tournament called Vale Tudo Japan. The main star of this event was Rickson Gracie, a mythological character that captured the imagination of the Japanese fans as unstoppable. The 1994 show did not feature big names, but Rickson was put on the map and instantly attained the status of a martial arts icon through his performances in the 1994 and 1995 tournaments. Soon thereafter, the booker of UWF International decided to pull a stunt that horribly backfired. Yoji Anjoh, largely a comedic figure who Takada trusted, went to Los Angeles to confront Rickson at his gym. Anjoh had no business being anywhere near the Brazilian in a real fight, and Rickson destroyed him. The beating was so bad that Anjoh apologized and photographers were allegedly pressured into hiding or destroying photos. However, the damage was done. Rickson returned to Japan in 1995 for the next VTJ event and had a legendary showing against Japanese star Yuki Nakai. As the legend of Rickson grew stronger, UWF International was falling apart from a business standpoint. The company eventually cut a deal to do some inter-promotional matches with Inoki’s New Japan company. Takada was the only wrestler who survived that feud with his credibility intact. The rest of the UWF International roster, including Kazushi Sakuraba, was crushed. UWF International died. The pressure for Takada to avenge Rickson’s destruction of Anjoh was growing.

Hiromichi Momose, a former yakuza boss who rebranded himself a “strategic planner” after his release from prison, created a shell company called KRS to finance a new MMA organization called Pride Fighting Championships. As Momose was a Takada ally, he was to be his star and Momose put up the cash to book Takada-Gracie at the Tokyo Dome. Of course, Takada had no business being in the ring with Gracie in a legitimate contest, but it was the fight everyone wanted to see. At Pride 1 on Oct. 11, 1997, in front of nearly 48,000 fans at the Tokyo Dome, Rickson won easily via armbar. They fought again at Pride 4, one year to the day since their first encounter, and the result was nearly identical. 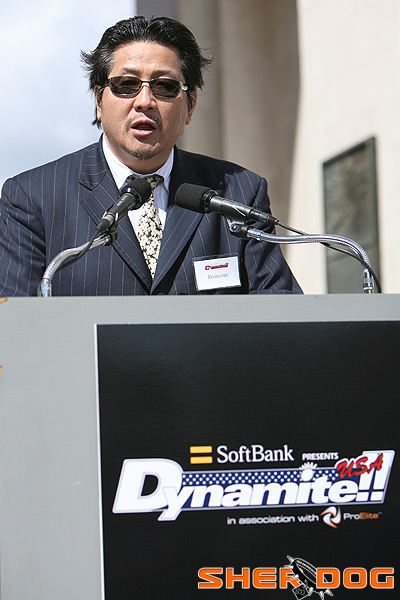 Photo: Dave Mandel/Sherdog.com
Maeda created Rings.
The Gracies were dominating MMA. Naturally, Pride needed a “Gracie Hunter.” The organization found its man in Sakuraba, a talented professional wrestler who was never pushed by Yoji Anjoh in UWF International. Sakuraba had won a UFC Japan heavyweight tournament match at Yokohama Arena but was the most unlikely of all the UWF International refugees to become the man, let alone a transcendental figure in the sport’s history.

After four Pride shows, KRS disbanded and a new mobbed-up shell company named Dream Stage Entertainment took over. Pride was starting to become a force and New Japan, which put UWF International out of business, was starting to fade. Inoki came up with the idea of blurring the lines in New Japan by using Naoya Ogawa, a 1992 Olympic judo silver medalist, as a catalyst to beat traditional pro wrestling heroes like Shinya Hashimoto -- a man with whom Ogawa had an infamous “shoot” incident at the Tokyo Dome.

Inoki soon opened the doors for the wrestling and MMA worlds to collide.

In November of 1999, Pride booked Sakuraba against the diminutive Royler Gracie. The controversial finish, with referee Yuji Shimada calling the bout while Royler was trapped in a Sakuraba kimura lock, royally angered the Gracies. Soon, UFC star Royce Gracie came to Japan to defend the family’s honor.

Royce fought Takada at the Tokyo Dome in January 2000 and emerged from a boring bout victorious. This set up a landmark, dream fight between Royce and Sakuraba in an open weight tournament format at the Tokyo Dome a few months later. They fought each other using 15-minute rounds. The marathon fight went 90 minutes, eventually ending when Royce’s corner threw in the towel. Sakuraba had damaged the Brazilian’s legs with his kicking attack, just like Inoki had damaged the legs of Ali in the Budokan fight nearly 25 years earlier. Sakuraba’s win over Royce, the Godfather of UFC fighters, propelled him to international stardom.

Finish Reading » Recent anti-yakuza laws in Japan have applied major pressure on the gangs. The lack of yakuza cash and network television support has crippled the MMA scene on a large scale in Japan. Companies like Shooto and Pancrase continue to promote and turn out fighters, but it is expected that the nation’s best have their eyes set on the UFC. Many simply remain hopeful that an interesting or charismatic Japanese athlete will reinvigorate the market.