Perhaps no one in Canadian mixed martial arts history commands as much respect and induces as much nostalgia as Carlos Newton. By age 32, the Newmarket, Ontario resident had been everywhere and done it all. He has been the UFC welterweight champion, fought in Japan’s Vale Tudo, Shooto, and Pride, and was coach of the International Fight League’s Toronto Dragons.

Now, after a year layoff, Newton (13-13) will be returning to competition to face Nabil Khatib (8-4) at Warrior-1 MMA “Inception” on March 28 at the Robert Guertin Arena in Gatineau, Quebec.

Newton said that he took the year off to tie up some loose ends in his life so that he could return to the ring with less baggage.

“Now I can get a good start for what I figure is one of the final chapters in my career, and it’s a good opportunity to represent Canada once again,” he said.

Newton admitted that the huge spike in the sport’s popularity, as well as the paydays, helped sway him to fight again, but he wouldn’t be returning unless his life outside of MMA allowed him to.

“One of my motivators in the past was that I didn’t want to be left high and dry when my career was over,” said Newton. “You can be the best fighter out there but not get the opportunities or, in my case, have some really tough breaks. For me to bank just on that I said, ‘hell, no way.’ I’m going to have to have a very good back-up plan. People will tell you to finish high school, but they don’t tell you that won’t put food on the table when you’re older. You’ll have to go a little bit further than that, and I went plenty further I think.”

It’s this goal that has often kept Newton from fighting. At one point he purchased and ran a nursing home in Newmarket, Ontario, but a few years ago his passions changed.

“As far as my medical career I’ve actually switched things,” he said. “I’m now in my second year of architecture and have opened up my own company, which is a construction consulting business and engineering.”

Ever the intellectual, Newton has analyzed the current state of MMA and says that he is coming up with strategies to help him succeed. 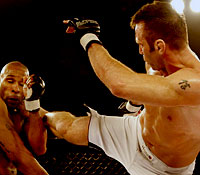 Al Quintero/Sherdog.com
Nabil Khatib (right) hopes
Newton displays ring rust.
“I didn’t want to jump back in there at the top, which I’ve done several times. In the past I’ve been rushed by people, and now know I need to shake the ring rust off and fight when I’m ready to fight,” he said. “I’ve always fought the top guys out there, but at the same time I know there are a lot of young up and comers out there and I’m going to take my time and get to know who these individuals are.”

Newton also realizes that his fighting methods need to evolve to meet the improved standard of today’s fighters.

“There’s not necessarily new strategies, but there are new trends emerging that are somewhat different from the time I used to fight, and some of these trends I’m going to sit down and map them out and come up with a game plan against them,” said Newton.

Only past his nineteenth birthday, Kelowna’s Rory MacDonald (7-0) added a second championship title to his resume, as the King of the Cage world lightweight belt joined its Canadian counterpart after MacDonald defeated tough veteran Clay French (16-4) at KOTC Canada “Grinder” in Calgary, Alberta last Saturday.

“It’s pretty surreal I guess, but it’s a good feeling,” MacDonald told Sherdog.com. “It’s a strange feeling to be considered one of the top guys in the world just two years into my fight career.”

MacDonald and trainer David Lea went into the match with a very specific game plan designed not necessarily to counter French’s strengths, but to turn them against him.

“Going into it we knew that Clay had amazing wrestling, so we wanted to test his conditioning,” Lea said. “We knew that Rory couldn’t match his wrestling, not with the background that Clay has, so we knew that once Rory was able to tire him out on the mat he’d be able to go in for the kill on the feet and that’s exactly what happened.”

MacDonald said that his goal was to remain very active off of his back, working his X-guard sweeps to make it hard for French to rest.

To the winner go the spoils, and Lea said that he has already been in talks for MacDonald to step his career up a notch.

“We’ve been in talks with the WEC and the UFC to a degree, so right now a lot of things are possible,” said Lea. “We really appreciate the opportunities that KOTC has given us, and right now we’re going to sort through what’s best for Rory and what’s best for his career.”