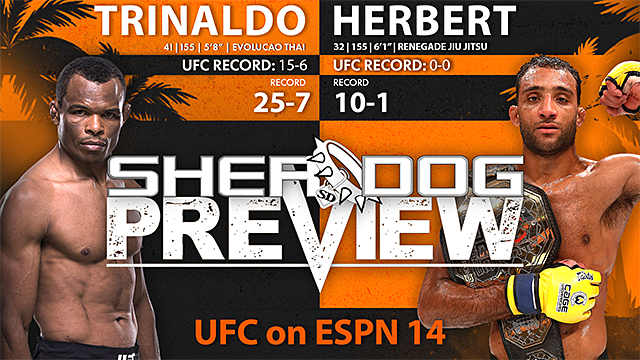 With eight fights, the last "Fight Island" card of July has a packed slate of prelims, both in terms of quantity and quality. An excellent veteran-vs.-newcomer bout between Francisco Trinaldo and Jai Herbert tops the list, but there are a lot of highlights up and down this card. Nicolas Dalby looks to build off of an inspirational return to the Octagon, top featherweight prospects Movsar Evloev and Mike Grundy aim to move up the ladder at the other's expense, and Tom Aspinall is the rare interesting heavyweight prospect, at least for the time being. And hey, who doesn't love a Bethe Correia fight?

The last man standing from “TUF” Brazil's first season, Trinaldo is still chugging along, even at 41 years-old. Trinaldo was obviously helped by getting the opportunity to become a full-time fighter; his first few fights under the UFC banner saw him leverage his strength in rudimentary fashion, but he eventually developed a surprisingly potent counter-striking game. That led Trinaldo to a seven-fight winning streak that spanned two years, but since Kevin Lee stopped that run in 2017, "Massaranduba" has mostly tread water as somewhere between a Top 20 and Top 30 lightweight in a deep division.

Trinaldo is still effective, but a worrying trend is that he's become more passive over time, with his output waning more and more as he waits for his opponent to lead. That leaves the door open here for British newcomer Herbert, who the UFC certainly seems high on; the former Cage Warriors champ was slated to face Marc Diakiese on the scrapped London card in March before getting another tough debut opponent here. Herbert has a lot of tools to work with; he can strike from both distance and inside the clinch with some solid power, and he has enough wrestling to get by -- at least at the regional level. So it's more a question of mentality: Herbert certainly has the ability to keep Trinaldo at range and pick him apart for three rounds, but can he stick to what might be a slow and boring gameplan?

Herbert's typically a forward-moving fighter who inevitably winds up locking horns with his opponent, so the call is for that to get him in trouble here and allow Trinaldo to physically control large swaths of the contest. Though again, this is all a situation where Herbert just hasn't shown what he needs to do to win this bout, even if he's capable of it. The pick is Trinaldo via decision.