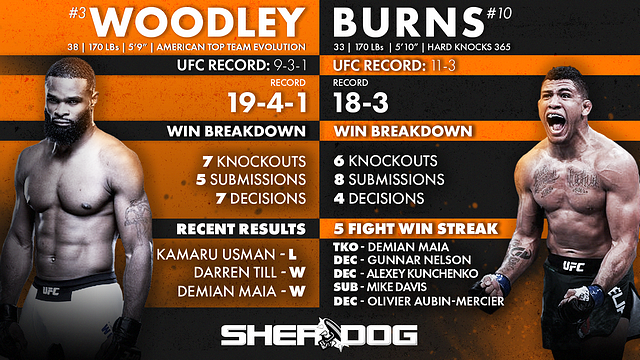 The Ultimate Fighting Championship looks to be back in full swing, and it starts with this mixed bag of a card. The UFC on ESPN 9 main event between Tyron Woodley and Gilbert Burns this Saturday in Las Vegas is the type of fight that is well-matched on paper but may be a bit of a chore in practice. That sums up a decent amount of fights on this lineup, as the top two fights, the featured prelim and even the opener are all difficult to call, but they may just stay at a tactical simmer rather than providing much action. As always, there are still some clear bright spots: Undercard bouts like Billy Quarantillo-Spike Carlyle and Tim Elliott-Brandon Royval figure to provide excitement for as long as they last.

Now to the UFC on ESPN 9 “Woodley vs. Burns” preview:

Some 16 months after Woodley lost his welterweight title to Kamaru Usman, we finally see exactly where he goes from here. “The Chosen One” has never really gotten his due, but any attempts to become a beloved champion were doomed from the beginning, since he quickly and brutally ended the excellent reign of beloved violence kingpin Robbie Lawler. While Woodley’s own reign had its moments—his first bout against Stephen Thompson had some excellent stretches, and he absolutely destroyed Darren Till—he took what was a conservative style from the outset and pivoted more and more towards neutralizing his opponents. His rematch against Thompson was one of the least entertaining fights in UFC history, and after following that up with a flat performance against Demian Maia, any hope of Woodley becoming a fan favorite was essentially over. Woodley’s style has always walked a tightrope on the way to success. Often backing himself against the cage, Woodley relies on the threat of his wrestling and his bomb of a right hand to either freeze his opponent into inactivity or make a mistake, at which point he can take over the fight. However, Usman blew that all apart and made it look easy in the process. The current champion just continued to move forward and outwrestle Woodley, never triggering any sort of huge counter and quickly wearing out the two-time NCAA All-American. There was not much of a clamor for a rematch, nor should there have been. Woodley’s style seems set in stone at this point, and it is difficult to see him overcoming the challenges Usman presents, particularly when it comes to wrestling. The question now becomes whether or not Woodley’s style works at all, or if Usman showed the blueprint to breaking him down consistently. This bout against Burns should go a long way towards finding that out.

Burns enjoyed a breakout 2019 campaign, as came out of nowhere to announce himself as a welterweight contender. “Durinho” was firmly on the lightweight prospect radar heading into the year, but he was still a former Brazilian jiu-jitsu stud trying to learn the ropes of mixed martial arts. After some difficulty getting opponents at lightweight, Burns decided to step in on late notice at 170 pounds and has not looked back since. He outpaced Alexey Kunchenko over three rounds, and having less of a weight cut meant that Burns could turn around less than two months later to earn an impressive win over Gunnar Nelson. That victory officially put Burns on the welterweight map, but it was in March that he became a true contender. His win over Maia could be framed as his taking the torch from the perennial elite grappler of the welterweight division, but Burns scored the win with his fists, escaping some danger on the ground to get to his feet and knock out the 2007 Abu Dhabi Combat Club Submission Wrestling World Championships gold medalist. That alone is impressive enough, as Burns became only the second man to finish Maia, who has had a long career of facing tough opposition. With another win, Burns is firmly in the title picture at welterweight. Not bad for someone who was not even in the division 10 months ago.

Woodley’s style does not look like it should work on paper, but as bad as Usman made the former champion look, there is still a decent chance that the Ferguson, Missouri, native remains effective for a few more years. “The Nigerian Nightmare” walking into close range did not trigger Woodley’s big counters, but the crucial part of the fight was that once “The Chosen One” sought to tie up with Usman, the latter was the stronger fighter. Burns shares the same camp as Usman, so he should be well-versed enough to follow the same game plan and not play Woodley’s usual game of chicken. If Woodley is truly broken, Burns might just manage to tee off on the former champ. However, if Woodley ties up with Burns and pins him against the fence for long stretches at a time, he can probably still win a few rounds, as boring as it might be. While Burns is a decent wrestler who has looked a bit better at welterweight, there is still a world of difference between what he can bring to the table in that department and what Usman managed to do. There are a lot of red flags here—between Woodley’s minimalist style and how it can go horribly wrong with only one bit of slippage—but if he comes in close to his usual self, there is probably enough left to win an ugly fight. The call is for Woodley to neutralize his way to a decision victory.