Former champion Frank Mir will try once again to ascend the heavyweight ladder when he meets 2006 Pride Fighting Championships open weight grand prix winner Mirko “Cro Cop” Filipovic in the UFC 119 headliner on Saturday at the Conseco Fieldhouse in Indianapolis.

Can Mir secure takedowns and utilize his superior Brazilian jiu-jitsu skills, or will Cro Cop’s deadly strikes, most notably his kicks, prove too stout for the former UFC heavyweight titleholder to handle?

Charlie Brenneman: I’m going to go against the majority on this one. Though Mir is a favorite, I’m picking Cro Cop. Cro Cop is one of my favorites, and I liked what I saw in his last fight. He’s very good at brushing off takedowns, and though Mir’s striking has improved, Cro Cop is a striker. Cro Cop has set forth a not-so-great impression in his pre-fight talks, but I’m looking for the decision victory in Cro Cop’s favor.

Matt Pena: Mir by submission. Unless Mir comes out flat and looks to strike with Cro Cop as his main strategy, I don’t see how Cro Cop can win. I know Mir is no Patrick Barry when it comes to striking, but it was easy to see how far Cro Cop’s striking has continued to diminish in that fight. He had to result to submitting a one-handed, one-footed fighter. That just doesn’t sound like the Cro Cop of old. I expect Mir to strike to a clinch, take Cro Cop down and to finish the fight there, either the second half of the first or second round.

Tom Vaughn: Cro Cop brought his own unique style to MMA and had some classic fights that made him one of the most feared guys in Pride during his prime. It’s sad, but I think those days are over. He just can’t bring himself to retire yet, but he should. Cro Cop is too small for the UFC heavyweight division, and he hasn’t adjusted very well to fighting in the cage. Mir has become well-rounded, and he is a smart guy. Mir won’t likely stay at the end of Cro Cop’s kicks, and, after he cuts off the cage, smashes Mirko into the fence and takes him down, it will be curtains for the man in the Purina checkered booty shorts. Mir by submission in round two.

Josh Thomson: Mir is too big and has been fighting tougher competition lately, not to mention if the fight goes to the ground, Cro Cop [has] already submitted, [so] he’d just tap. That doesn’t make me wanna pick him.

Travis Lutter: I think Frank’s BJJ and takedowns will be too much for Cro Cop. Cro Cop hasn’t transitioned very well to the cage, so I really think Frank wins this one.

Mike Whitehead: Frank by submission in round one. 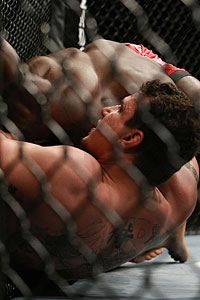 Dave Mandel/Sherdog.com
Watch out for Mir's guillotine.
Greg Nelson: Cro Cop is always dangerous on his feet, but Frank should be smart enough to get it to the ground. Once on the ground, I can’t see Cro Cop stopping an eventual submission. Mir by submission in the second round.

Keith Berry: I’m taking Cro Cop [and] not because I think he’s going to win; I just hope he does. I hope we see the old Cro Cop that gives people that quick and painful left high kick.

Jeff Joslin: I’m actually kind of looking forward to this fight. The huge size and cornerless shape of the UFC cage has unfortunately given Cro Cop’s previous opponents space to move --sometimes even run -- away from his most dangerous weapons. I see the same thing happening here, as Mir will avoid getting KO’d in highlight reel fashion long enough to score a takedown. Once it hits the ground, I think Mir will soften Mirko up with ground-and-pound until a submission opportunity comes up. Mir wins this by submission early into round two.

Marlon Sandro: I think Cro Cop will surprise him in this fight.

Bobby Southworth: I’m really hoping Mirko pulls this off. Nothing against Mir; just been a longtime Mirko fan. That being said, the fight favors Frank. He’s an intelligent, but most importantly, agile big man. As he fights southpaw, natural movement takes him away from Mirko’s most dangerous weapons: the left hand and the left liver/head kick. As people have learned to move away from said weapons, Mirko’s lethal striking has been severely affected. If he moves in behind the jab, his lead leg is exposed to a level-change to double-leg shot. Frank’s shot is definitely better than Mirko’s sprawl. Gotta go with Frank on the ground by ground-and-pound or submission before the midway point in the fight.

Marcio “Cromado” Barbosa: Mir wins by submission in the first round.

Mike Ciesnolevicz: I think Frank Mir is too much for Cro Cop at this point. I think Mir eventually gets this fight to the mat by a takedown or even pulling guard and finishes Cro Cop shortly after with a nasty submission. Mir is confident, and I think he believes in himself more than Cro Cop does at this point. It’s sad, but the best days of Mirko were in Pride. He will never be that fighter again.

Jason Dent: Well, I definitely feel that Mir is the more well-rounded in this matchup, but I’m going to go with Mirko. I think Mirko will win by unanimous decision and possibly even by TKO. I’m not a huge fan of Mir. I think he is way too cocky and outspoken. I really think Cro Cop is finally starting to get comfortable in the Octagon, and it’s gonna show in this fight.

Michael Guymon: Mir by submission in round one.

Tom Gavrilos: I’m going to go with an upset by Mirko via decision on this one. It’s going to be hard to get and keep him down, especially if he has finally learned how to use the cage in his favor.

Gustavo Machado: I think that Mir wins by submission.

Stephane Vigneault: Nothing really to say more than Mir will shoot, Cro Cop will sprawl, then Mir pulls guard and catches something like an arm or a leg. Very bad matchup for Mirko. Mir over Cro Cop by submission in round one.

Ray Elbe: Frank Mir by TKO sometime after his wife Tweets the play-by-play in the second round, bragging to the other UFC wives ’bout how good her man is.

Shamar Bailey: I think this fight will come down to how well Mir uses his striking to get the fight to ground. His stand-up is good enough to do so but not good enough to keep the fight on the feet. If Frank takes it to the ground, I see him winning by submission in round one or two. If the fight stays on the feet, I see Cro Cop winning by unanimous decision.