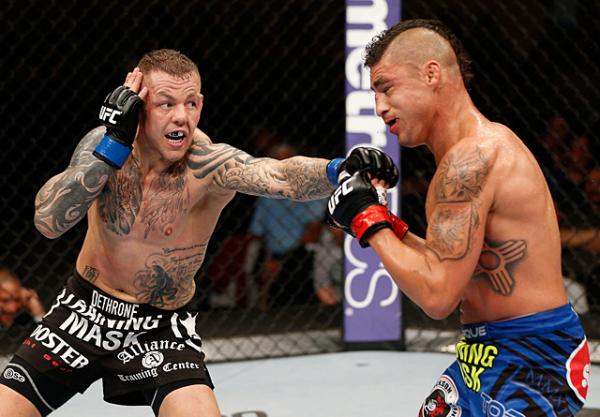 Ross Pearson was robbed in the eyes of many. | Josh Hedges/Zuffa LLC/Getty Images


UFC President Dana White is fond of telling fighters not to leave their fate in the hands of the judges. That particular piece of advice gains particular urgency when you are in a fight with Diego Sanchez. The durable New Mexico native is extremely difficult to finish, never having been submitted or fully separated from his senses in a fight -- his only stoppage loss came via cut in a lightweight title fight against B.J. Penn. However, you cannot be content to just outland the man and count on the judges, because funny things tend to happen when Sanchez fights go to the scorecards. Poor Ross Pearson found that out firsthand on June 7, when he took on Sanchez in Sherdog’s 2014 “Robbery of the Year” at UFC Fight Night “Henderson vs. Khabilov” -- the infamous Malarkey in Albuquerque.

This may sound like a strange note to start a piece on the “Robbery of the Year,” but MMA judging is not in as big of a crisis state as it is often portrayed. The big problem for MMA judges in the court of public opinion is that there are so many fights now for fans to watch and comment on live. With a huge number of fighters, it is easier for the matchmakers to make even, close matchups. As a result, you have a constant flow of close decisions, and that lends itself to controversy. Social media is there to further amplify outrage.

In 2014, there were 57 split decisions in the Ultimate Fighting Championship alone, putting aside all the other close fights that did not end up with dissent amongst the judges. That means there were more split decisions over the last 12 months than there were total fights in the first year Zuffa owned the UFC. That leaves plenty of room for disagreement in a sport that is an amalgam of various disciplines with so many different approaches to how best to defeat an opponent.

Gone are the days when judges simply did not understand the ground game and would reflexively score rounds for whichever fighter was on top no matter what. MMA is not ravaged by boxing’s epidemic of dubious decisions always seeming to go the way of promotional favorites and rising potential moneymakers. You can usually understand why a judge scored a round in a certain way, even if you disagree. However, there still remains a certain type of fight that has doggedly presented problems for judges over the years. MMA judges just cannot get enough of a fighter madly charging forward.

In combat sports, aggression ought to be effective in order to score. Wildly attacking and pushing the action should not count for much if you are rarely connecting and your opponent is countering you with hard shots right to your chin. However, time and time again, judges have rewarded reckless fighters for valiantly getting beat up. In MMA, sound and fury do not signify nothing.

It is no accident that at one point Leonard Garcia was the poster boy for gift decisions in MMA. His macho, crowd-pleasing style at times proved irresistible to judges, even when Chan Sung Jung and Nam Phan were giving him one sided beatdowns. When Garcia left the UFC, Sanchez picked up the mantle for fighters everywhere who value excitement and forward movement over caution and self-preservation.

Since he scored a deserved decision over Paulo Thiago at UFC 121, Sanchez has three additional decision victories over Martin Kampmann, Takanori Gomi and Pearson. In not a single round of the nine did he score more significant strikes than his opponent. Picking the worst decision of the three is like picking the most impressive of Michael Jordan’s championships or the best Christopher Nolan film. They were all surreal masterpieces, special in their own way. Given the first two, Pearson had to know he might be in for trouble fighting Sanchez in Sanchez’s hometown. He would likely need to dominate to score a decision.

Unfortunately for Pearson, domination was not enough. He out-landed Sanchez in every round: 13-8, 17-13 and 21-12 in significant strikes. He landed at a higher percentage in every round: 38 percent to 20 percent, 41 percent to 25 percent and 44 percent to 27 percent. He scored the only takedown of the fight. He landed the harder blows and left Sanchez with a series of facial lacerations, including a bad cut over the right eye. He even went on offense, not content to effectively counter like Kampmann and Gomi before him. It is hard to pinpoint an area of the fight where Pearson was not better than Sanchez.

At the end of 15 dominating minutes, there did not appear to be a lot of question as to who won the fight. Announcers Jon Anik and Kenny Florian clearly thought it was Pearson’s fight. Of the 14 media scores listed at MMADecisions.com, all had the fight for Pearson. All but one had it 30-27. Chris Nelson, TJ De Santis and Jordan Breen’s official Sherdog scores all gave it to Pearson 30-27. Yet when the judges’ scorecards were read, Sanchez picked up a split decision. Judge Chris Tellez had it 29-28, while the generally reliable Jeff Collins had it an inexplicable 30-27 for Sanchez. “The Dream” had done it again, scoring a victory for the heart over the mind, not to mention the eyes, ears, statistics and common sense.

“Those judges should be ashamed,” declared the usually circumspect Florian, speaking for pretty much everyone watching the fight.

“Diego lost that fight,” he added later. “The judge who judged that fight should never be judging fights again.”

The night was not a total loss for the Brit, as the UFC gave him his win bonus as a reward for his impressive performance. The UFC also tends to book fighters who lose bad decisions as if they had won, and Pearson received a high-profile follow-up fight against Gray Maynard. That TKO victory in August was one of the most significant of his career. Maynard also gained sympathy from fans over what happened and the way he handled the situation. His career did not end up significantly affected by the whole affair, which is about as much as he could hope for after hearing the score totals announced.

Moving forward, fans can only hope judges will do a better job of distinguishing effective aggression from haphazard charging. Fighters deserve to be rewarded for bringing the action to opponents and not simply playing it safe. However, that should not be a substitute for landing more shots and doing more damage. Swinging at air is of relatively low value in a fistfight.

It is not always easy to discern which individual blows are landing and which are not in the midst of a wild flurry. The force of blows can often be heard better in one corner of the cage than in another. However, over the course of 15 minutes, trends emerge. It should be evident which fighter is on balance getting the better of the action when one fighter clearly is doing so. That is not a question of knowledge or insight; it is an issue of basic competence. Judges should be able to distinguish hammer from nail.

Pearson surely would have appreciated his rightful due as the official winner of his bout with Sanchez. However, he can take some solace in being named the victim of the “Robbery of the Year.” Consolation prizes do not get much richer. If you ever get a rematch, “Real Deal,” be sure to take out some theft insurance in advance.