This was academic. We could've had the crystal etched eight months ago.

May 1 was a night of tectonic importance. Upstart Bellator Fighting Championships became must-see MMA programming and a factory for viral video moments. The original script for their lightweight tournament was rewritten. Most principally, the previously little-known Toby Imada became synonymous with "inverted triangle choke" and not "journeyman."

Bellator's lightweight tournament was the focal point of the promotion’s debut effort in 2009. It featured their biggest star -- eventual champ Eddie Alvarez -- and the brackets foretold of a thrilling slugfest for a finale, between Alvarez and noted boatyard brawler-turned-serious prospect Jorge Masvidal. In fact, when the preliminary brackets were posted on Bellator's official Web site weeks out from their April 3 premiere, fans immediately scoffed and spewed about the fact Alvarez and Masvidal were penciled in on the same side of the bracket, potentially fighting in the semifinals.

"But that should be the final!" cried the discontented hardcores (this writer included). Whether by popular demand, common sense or a clairvoyant inkling that an improbable highlight reel may lie ahead, the seeding was shifted to set up an Alvarez-Masvidal finale should they win their first two tournament bouts. Toby Imada was just another name on the bracket.

Though Imada did handle Alonzo Martinez easily, choking him out in the first round of their lightweight quarterfinal in April, he figured to be just a tune-up for "Gamebred" when they met on the first evening in May in Dayton, Ohio. And, for about 13 minutes, he was. The swaggering Masvidal hit him with right hands and lunging knees for the vast majority of the bout and thwarted any attempts by Imada to get the fight on the floor. Imada was game but a step behind the whole bout. When he finally did put Masvidal on the floor early in round three, the Miami native scrambled back up without incident.

With exactly two minutes to spare until he lost a unanimous verdict, Imada initiated the sequence that would culminate in his shocking come-from-behind victory and unanimous Submission of the Year honors. However, understanding what made Imada's MMA magnum opus so gripping goes beyond the technique and mechanics behind his inverted triangle choke.

The Journeyman Comes 'Round

"I wasn't seeing any light, any future in MMA," Imada reveals of his early career outlook.

The 31-year-old Imada got into MMA strictly to stay active. While in college, friends brought him to see some low-rent MMA bouts in backyards and warehouses in Southern California. With a judo background and a desire to continue competing, he thought it seemed like a worthwhile hobby to stay in shape, but little more than that.

The weekend warrior mentality was evident in his record. When he was free to take fights, Imada took as many as possible, in rapid succession. Other times, his "real" life -- employment, and his daughter -- were more important, and he went months, and in one case, three years, without fighting. He was a textbook journeyman, with just enough skill and toughness to be a worthwhile opponent for the likes of Joe Stevenson, Jason "Mayhem" Miller, Antonio McKee, Jake Shields and Hermes Franca.

"I just liked the competition," says Imada. “Honestly, I can't even say I was a big fan of the sport. When I fought Jake Shields, I didn't even know who Jake Shields was. I just knew people were acting afraid of him, and I thought, 'Why?'"

The passage of MMA regulations in California in late 2005 changed that outlook for Imada.

"When it got legalized in California, I thought maybe something can happen out of this. Since then, I started putting a little more attention into my training, who I was fighting and where. It started coming together since then." 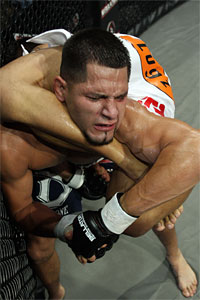 Photo Courtesy: Bellator
This award was academic.
In the past, Imada worked two jobs in addition to school and was lucky to slip in three or four two-hour training sessions during the week. The jobs offered little pay and less consistency, as he bounced from retail to waiting tables to kitchen staff and back again. Now, Imada is able to train like most high-level pro fighters, with two sessions a day every day, with real training partners.

However, his career turnaround wasn't immediate. In early 2006, he lasted a combined 66 seconds in his role as "the opponent" for Tetsuji Kato and Hermes Franca. Seven months later, he was tapped by Joao Cunha, a BJJ competitor sporadically moonlighting as an MMA fighter. Imada's belief that he could carve out a bigger niche for himself in the MMA world was strengthened in the gym.

"People I knew started getting recognition, big fights. I had to bite the bullet and give it one last shot," explains Imada. "I was dominating UFC and WEC guys in the gym. People training with me knew, but I just never had a way to show it."

With a record just slightly over .500, big shows balked at Imada. He felt slighted, but it may have made all the difference. After the Cunha loss, Imada turned in six straight dominant stoppages and was able to earn a look from Bellator.

"I was dealing with a lot of frustration going into the tournament," says Imada. "I saw new guys in this sport who weren't as good as me getting shots in the UFC, WEC. With Bellator, they were interested in me. That was what mattered. I just needed a shot."

The Anatomy of a Highlight Reel

With two minutes left until defeat, Imada finished a desperate single-leg takedown on Masvidal. Masvidal was able to scramble to his knees and look for a single of his own to take the position away from Imada. This wrestling exchange set submission greatness in motion.

Masvidal attempted to pick Imada up to slam him but couldn't keep control of his legs. Instead, he ended up standing with Imada holding an upside-down rear waistlock on him. As Masvidal drove forward to pick Imada up, he launched his posting arm, and his head, into Imada's thighs. Though he couldn't see behind him, Imada felt the movement from Masvidal and cinched up the figure four with his legs to complete the triangle.

For three seconds, Masvidal seemed fine. Then, in an instant, he was hunched over, struggling to stay conscious while his pallor changed before our eyes. Imada locked over Masvidal's hip with his hands, arched and squeezed. "Gamebred" didn't tap, but he toppled over unconscious. The final image of the hold crystallized its place in the grappling annals: Masvidal's upside down body bent back like a bow-and-arrow ready to fire, his starkly purple face not even remotely matching the color of his body.

"That move was taught to me when I was 15, when I was still training in judo," Imada says. "It just happened that I was able to lock Jorge up with it while I was still on the feet. I've been able to finish bigger, better guys with that in the room. It wasn't anything that I thought about; it was all instinct. It's like riding a bike."

Despite Imada's familiarity with the technique, to say it caught Masvidal off guard would be an understatement.

"S--t, man … I had a grin on my face," Masvidal remembers. "I thought I was gonna get the highlight reel. I was gonna slam him.

"When I stood up completely, I thought, 'Man, my back's hurting.' That's when I leaned forward, but it was too late."

The Resonance of an Inverted Triangle

In a vacuum, divorced from context and ramifications, Imada's inverted triangle likely would have won Submission of the Year honors anyhow. But it is the compounding factors in the story -- the coming-out party for a journeyman, a submission upset and comeback of the year all in one -- that make it even more special.

“
I had to bite the bullet
and give it one last shot.

It is better still that the submission perfectly captures 2009 as a year itself. In a year marked by the ever-growing dominance of viral content, Imada's inverted triangle choke was MMA's viral video sensation of the year. The official upload from Bellator's YouTube channel has over 600,000 views to date, but that overlooks the fact that the video spread all over the internet in .gif form and was reuploaded to a whole slate of viral video sites and portals. Though Imada went on to lose to Eddie Alvarez in the June tournament final, the tournament conclusion was a complete afterthought following his submission victory six weeks earlier.

Imada is thankful his handiwork is so celebrated, but he eschews the superlatives cast upon it.

"I didn't see it as anything flashy. It just happens that not too many others had seen it," he says. "I'm flattered and blown away. The fact that everyone is so crazy about it, that's something to feel good about it, but I have to put it behind me. I don't want that to be my only claim to fame."

Imada's nonchalance belies the even greater significance of the highlight.

"This spectacular moment in our sport was instrumental in building the Bellator brand and creating an MMA viral tsunami," says Bellator CEO Bjorn Rebney. "Toby's submission speaks directly to the power of the tournament format and how it results in world-class fighters doing whatever is necessary in every fight to just win."

It sounds like Rebney is pontificating in promoter-speak, but he's correct. In Bellator's early existence, even interested diehards were alienated from the product due to the fact that the events could only be seen the day after, and only on ESPN Deportes, which relegated the promotion to the periphery of MMA consciousness. Imada's moment transformed Bellator. The promotion saw the chance to put more content free on YouTube, reinforced by a subsequent rash of electrifying finishes including Yahir Reyes's spinning back fist on Estevan Payan, Nick Pace's flying knee on Collin Tebo and others.

Instantly, Bellator was no longer treated as an obscure fly-by-night but instead as must-see MMA content replete with top prospects and highlight-reel finishes. That shift allowed Bellator to ink deals with Fox Sports Net, Telemundo and NBC, a network of alliances that will allow them to produce live weekly fight cards for their forthcoming cycle beginning in April, which already has hardcore fans salivating.

Perfectly enough, come April, the second Bellator lightweight tournament will open up with a rematch between Imada and Masvidal in the quarterfinals.

"Man, I wanted a rematch right away," says Masvidal. "Bjorn told me, 'We'll see what happens after the finals.' Now, I wanted him right in the first round. No diss to Toby, but he could lose, you know? I want to do it right off the bat and kick his ass."

"It's just business," Imada says laconically. "I might be mad too if everyone saw me getting choked out, squinting, turning purple."

Even if Imada can't replicate his May upset, more people will be watching this time around. His highlight-reel heroics deserve all the credit for that.