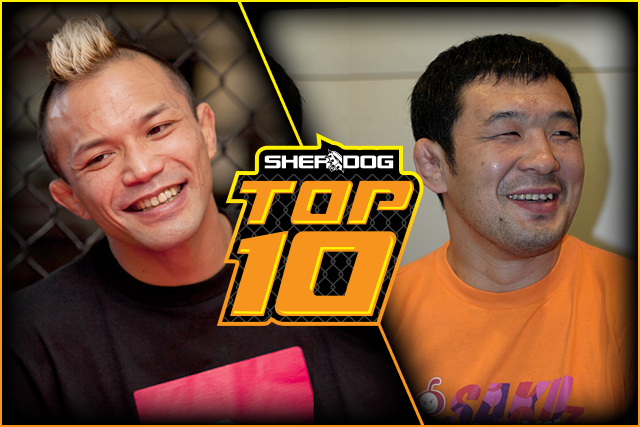 Welcome again folks, this time to Sherdog's list of the 10 greatest mixed martial artists to hail from the Land of the Rising Sun. This was compiled as an average of many different Sherdog contributors' lists, and I will note where my own views deviated considerably. Personally though, the appeal of any such lists isn't the exact ordering or who was included or excluded, but the actual discussion below each entry. Anyone can come up with a list with no further commentary and it's no more “right” than another. However, the best such lists have entertaining and informative explanations, which is a goal I hope to accomplish.

A word about criteria: My main measure for this list was greatness for one’s era and how long that era lasted. I believe the majority of other contributors used a similar rubric. Ranking historical fighters based on who would beat whom doesn’t make sense, since the sport as a whole keeps improving and evolving. Megumi Fujii would be beaten by plenty of female strawweights nowadays and Kazushi Sakuraba would have no chance of cracking the current top 20 at welterweight or middleweight but in their time they were not just great, but the best. Nevertheless, fighters from earlier eras may be penalized for competitive their division was or was not. There were fewer decent fighters in the 90s when compared to even the 00s, let alone today.

By way of honorable mention, there were several fighters who received at least one vote in our poll, but not quite enough to crack the Top 10. In descending order, they are: Ayaka Hamasaki, Caol Uno, Masakatsu Funaki and Genki Sudo.