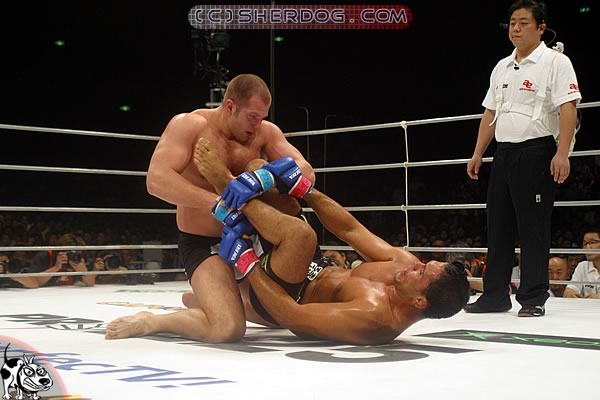 Aesop’s fable “The Fox and the Lion” taught us that familiarity breeds contempt, and few settings epitomize this idea like a mixed martial arts cage or ring. Physical combat in close quarters tends to make emotions run high, and competitive spirit tends to boil over when adversaries cross paths more than once.

Not all rivalries are forged through hate and disdain, however. Some arise from a mutual respect that manifests itself in the heat of battle. Sometimes, two athletes bring out the best in one another. Often, it is a combination of all of the above.

The list that follows was selected and voted upon by a 10-person panel of Sherdog.com staff members. It includes feuds based on hate as well as the love of competition. Different countries, philosophies and promotions are represented. Tito Ortiz might even show up a couple times. Welcome to Sherdog.com’s Top 10 MMA Rivalries, a poll where moral victories do not exist.

There are, however, honorable mentions. Not every great MMA rivalry can crack this list. Many notable MMA rivalries -- Anderson Silva-Chael Sonnen, Chuck Liddell-Wanderlei Silva, Frankie Edgar-Gray Maynard, Ken Shamrock-Royce Gracie and Matt Hughes-Frank Trigg -- all garnered discussion, but could not quite sneak into this Top 10.


The Rundown: Before Emelianenko could become one of the sport's mythical pound-for-pound figures, he was a decided underdog against Nogueira prior to their fight at Pride 25. At the time, the enigmatic Russian was not well known within the promotion, having made his Pride Fighting Championships debut a year earlier.

Nogueira, meanwhile, was unbeaten in seven outings with the Japanese organization and looked to be an unstoppable force. Despite the Brazilian having earned four of his last six triumphs via triangle choke, Emelianenko dove straight into Nogueira’s guard and fearlessly attacked. It would be a recurring theme for three rounds, as “The Last Emperor” unleashed effective ground-and-pound while effectively avoiding submissions to become the new Pride heavyweight king.

The two would meet again in the finals of Pride’s 2004 heavyweight grand prix, but an accidental clash of heads left Emelianenko unable to continue, and the bout was ruled a no contest. Their third fight, on New Year’s Eve that same year, was in stark contrast to their initial classic. Despite having proved himself capable of working inside Nogueira’s guard, Emelianenko chose to attack on the feet. The plan worked, and Emelianenko kept his foe off balance by dropping him with punches and tossing him to the mat with throws. Minotauro struggled to score takedowns and never threatened with any serious submissions. After three rounds, Emelianenko again emerged victorious via unanimous decision.

“Physically, he is the fastest heavy guy in MMA history ... He’s the fastest I’ve ever seen,” Nogueira would say in an interview with Graciemag.com.

If things had gone differently, perhaps Nogueira, whose game was as well-rounded as any big man in the sport at that time, would have claimed the title of greatest heavyweight of that era.