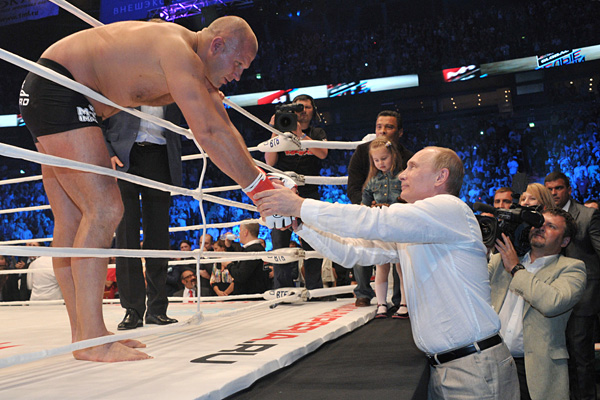 After his first-round knockout of Pedro Rizzo on June 21 in St. Petersburg, Russia, the greatest heavyweight MMA to grace MMA, Fedor Emelianenko, hung up his well-worn-and-pounded gloves and called it a career.

The news was no surprise, as it had been rumored that “The Last Emperor” would announce it was his last hurrah prior to the bout. More curiously, just as fast as the 35-year-old legend withdrew from the sport, rumors arose that suggested Emelianenko would fight again. As it stands, few in the MMA world believe that the man who ruled the heavyweight division with an iron fist for an unprecedented seven years is really, truly, 100 percent done with MMA. However, given Emelianenko’s all-time greatness and uniquely fascinating persona, we at Sherdog.com would’ve been remiss to not reflect on his career.

No fighter ever had an entire mythology to themselves quite like Fedor Emelianenko. His career unfolded in a classic dramatic fashion, replete with strange characters, heroic triumph and eventually, crushing defeat. Emelianenko established a new standard of achievement and dominance in MMA and was the Atlas figure of MMA’s heavyweight division for a decade. Inside the ring, he was an emotionless tormentor, almost to a cinematic degree. Outside of it, he was a consummate sportsman and ambassador the sport, a man whose international popularity as a mixed martial artist is to date, unrivaled.

And, like so many transcendental greats, Emelianenko never shied away from controversy, confidently moving to the beat of his own drum. His business and career decisions, from his early dealings with Russian Top Team and Rings to his infamous promoter M-1 and their co-promotional efforts with a host of players, were hot-button MMA topics that polarized the sport and only reinforced Emelianenko as a larger than life, yet undeniably aloof sportsman.

Few fighters have given us so much to remember them by, and perhaps that’s why the MMA community finds it so hard to believe that a simple dispatching of a faded Pedro Rizzo is really the end of Fedor Emelianenko. However, even if we’ve seen the last of “The Last Emperor,” we’ve been left with no shortage of vivid memories.

Mike Fridley: Hardcore fans knew of the quick heavyweight prior to his Pride debut and christening against lanky Dutchman Semmy Schilt, but it was his jaw-dropping destruction of the durable Heath Herring that opened many eyes to his potential greatness. Never before had such power striking been displayed on the floor at the sport’s highest levels, and with all due respect to Mark Munoz, Fedor’s ground-and-pound may never be equaled. The oldest Emelianenko brother is a once-in-an-era talent, and has left his mark on mixed martial arts for generations to come.

Tim Leidecker: It is really hard to single out just one memory of the Last Emperor, as his whole run in Pride was a human highlight reel. However, his first bout with Antonio Rodrigo Nogueira stands out. Before the encounter, “Minotauro” had been on a 13-fight win streak. The Brazilian had gone 7-0 in Pride, finishing six of his opponents using his unparalleled submission skills. The BJJ black belt was considered simply too technical for the opposition. He also possessed an iron chin, which prompted Bas Rutten to dub him “superhuman”. Jeff Sherwood
Emelianenko destroyed Nogueira with
his vaunted ground-and-pound.
Was this stocky Russian really going to pose any serious threat to Nogueira? Hardly, people thought. They were wrong. In what was considered a big upset at the time, Fedor took down Nogueira at will and pounded on him for the entire 20 minutes of their fight, snatching the championship from him in an epic battle.

What was even more impressive, though, was the fact that Fedor completely shut down the Brazilian’s highly dangerous submission game. Fedor defended every submission Nogueira threw at him and unleashed some of the heaviest ground-and-pound in the history of the sport. He found the antidote against Minotauro’s poison and became one of just two fighters to beat Nogueira in his prime.

Jeff Sherwood: I had the pleasure of shooting Pride 25 ringside, which was pretty unusual for an American media member. I always found it amazing how stone-faced Fedor Emelianenko was inside the ring. He never seemed to even have an elevated heartbeat. This fight was no different as Fedor entered the ring as the underdog against the champ Antonio Rodrigo Nogueira.

Fedor was able to sit in Nog’s guard and punish him in round one. Nogueira was unable to mount any type of offense. Fedor hurt the Brazilian worse in a single round than anyone else in Nogueira’s career to that point. However, rounds two and three only got worse.

The final 10 minutes of this fight was host to some of the worst violence I have ever witnessed in a ring or cage, and most of it happened to take place two feet from my face. I have tried to explain this before, but it’s hard to put into words. That night, I was hearing things that were actually disturbing and shocking to my ears and eyes. The loud thuds as Fedor’s fists pounded on Nogueira’s face, Nog making low grunting sounds every time he ate a big shot (and there were plenty of them). I looked away twice in this fight, both times thinking, “Damn, Nog is too tough for his own good. Maybe this fight should be stopped.”

Even as he dished out massive punishment, Fedor seemed so calm and natural that it was scary. It reminded me of movies you see, how they portray serial killers doing terrible things and thinking nothing of it. Fighting was clearly Fedor’s calling.

The craziest part was seeing Fedor a number of times outside the ring after that night in Yokohama. He is so happy-go-lucky, always joking around with whomever he was with, in spite of any language barrier. It was amazing how he could turn it off and on, from smiling to stone-faced when the occasion called for it. J. Sherwood
When Emelianenko took his Pride title
another legend was on hand.


The end of Fedor Emelianenko’s career wasn’t what anyone expected or wanted, but none of that mattered to me. I will always remember what I saw -- and heard -- on March 16, 2003, inside Yokohama Arena.

Bobbie Clark: When I first heard whispers of a Russian fighter who could feel no pain, the rumors about Fedor Emelianenko were rampant: he was created in a lab by the Russian government, he trained with bears, he was a cyborg. Ridiculous, I thought, especially after seeing pictures of the man. He was chubby, with a round face and even rounder features. He looked more like a writer than a fighter.

I watched his bout against Kevin Randleman, who outwrestled the Russian and even viciously slammed him on his head. Undeterred, he scrambled, gained side control and locked on a kimura, forcing Randleman to tap. For me, it was Fedor’s lack of emotion through the whole fight that was most impressive.

Fedor kept the same expressionless demeanor throughout the bout, even as he was being slammed on his head. For Fedor, it wasn’t personal -- it was strictly business. When he stepped into a ring or cage, it was time to go to work. He clocked in, inflicted as much damage as possible, clocked out and collected a check.