The go-home push for what is being billed as the biggest fight in UFC history hit on several fronts this week, with UFC President Dana White making bold predictions about how successful the pay-per-view will be. The return of Randy Couture -- after 14 months in legal limbo -- against relative newcomer Brock Lesnar provoked much discussion ahead of Saturday night's heavyweight title fight, which takes place during a week that marks the UFC's 15-year anniversary.

The hype machine began rolling Monday with the premiere of a "Countdown" special on Spike TV that aired just as the Lesnar-loving audience had finished with the WWE's weekly flagship television show, “Monday Night Raw” shortly after 11 p.m. The Countdown special delved mostly into the UFC career of Couture, beginning with his first fight against Tony Halme in 1997 and touching on of all of his odds-defying achievements since. Couture's legal showdown last year with Zuffa was explored, including clips from the press conference that he called to announce his resignation from the promotion. The special, which focused entirely on the main event, was sprinkled with interesting clips from the September day when the bout was signed. Fans saw behind the scenes of the White-led conference where Couture's return was announced and then watched snippets of an ESPN sit-down with the principals. The cameras appeared to be off, however, during the last-minute drama and Couture walkout that nearly led to the cancellation of the fight announcement. There was new Couture legal drama this week, as TMZ.com reported the champion's wife obtained a temporary restraining order against Todd Beard of Affliction, the company that manufactures Couture's signature t-shirts. Couture said in court papers she sought the order due to Beard making "a series of threats and acts intended to intimidate me." The order bans Beard, who has also butted heads with Zuffa management, from the MGM Grand Garden Arena this weekend.

While very well produced, the Countdown show drew a disappointing 537,000 viewers on Monday night, below the series' 2008 average, according to MMAPayout.com. The number was markedly lower than the 701,000 drawn for the UFC 88 preview special featuring Chuck Liddell, indicating fans haven’t been clamoring for every last morsel of promotion for the fight.

The event did not sell as many tickets as expected but due to high ticket prices, could end up producing the UFC's highest gate. UFC President Dana White attributed the lack of sellout to the current economic malaise. White predicted in several interviews this that UFC 91 would draw the highest buy rate in company history, ahead of the Chuck Liddell vs. Tito Ortiz fight in Dec. 2006, the only UFC show to top one million buys. White said he expects a pro wrestling crossover audience to buy the fight, suggesting that "Vince McMahon might even buy this fight."

Couture attracted in the range of 530,000 buys in his two fights last year, while Lesnar drew about 650,000 for his debut against Frank Mir in February, though that number dipped for his August fight against Heath Herring. In short, it's not a lock that the UFC 91 stats will live up to the billing.

It won't be for lack of trying or lack of attention. The UFC purchased ad time on an unusually high number of cable stations for the show, including CNN, Comedy Central and USA, to hype the fight. The UFC even cut a deal with 50 Cent to release a promotional video for Couture vs. Lesnar set to the rap star’s new single “Get Up.” 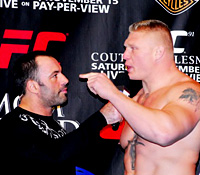 Photo by Sherdog.com
Will Lesnar vs. Couture sell?
Spike TV re-aired “All Access” training specials on Lesnar and Couture Thursday night. Weigh-ins were carried Friday on the ESPN News channel, the first time a UFC weigh-in has aired on ESPN since the Liddell vs. Quinton Jackson fight in May of last year. Two and a half thousand fans watched Couture weigh in at 220 pounds to Lesnar’s 265-pound entry.

ESPN.com’s MMA Live is filing several live reports from the site, including a slick weigh-ins show, which aired on ESPN.com.

The principals went face-to-face at a press conference in Las Vegas on Thursday; Couture told Sherdog he detected a more respectful disposition in Lesnar, who had flared up in interviews, a few days out.

Observers broke down all angles of the fight this week, with Lesnar slightly ahead of Couture in the betting odds. Elite jiu-jitsu instructor Robert Drysdale, who has helped Couture train for the fight, told Sherdog's "Beatdown" radio show Couture spent the most time drilling how to get out from under a domineering wrestler like Lesnar and get the fight to the feet. This seemingly reduces the likelihood of Couture attempting many submissions from his back. Couture's main training partners for the fight have been Forrest Griffin, Mike Whitehead and a pair of All-American wrestlers in John Juarez and Josh Hendricks (who faces Gabriel Gonzaga this Saturday). Seth Woodall, a 300-pound collegiate grappler, has also lent his tough-to-find size to the effort. Couture told Sherdog.com that he has brought in five guys over 280 pounds to train, and needs to move his entire body to dodge Lesnar’s attacks instead of just his head.

Lesnar moved his training camp out of the Minnesota Martial Arts Academy into his own private space in the woods of Minnesota, training with the likes of Nick Thompson and Marty Morgan, an NCAA national champion wrestler and former assistant coach at the University of Minnesota, who has trained with Couture in the past.

While the main event gobbled up almost all of the attention, the UFC found itself having to scramble a bit this week to adjust the undercard. Amir Sadollah, who was set to face Nick Catone in his first fight since winning season seven of “The Ultimate Fighter” in June, had to pull out of the card due to a leg infection. The UFC was not able to find a replacement for Catone, and will move a fight between Tamdan McCrory and Dustin Hazelett to the main card. Kenny Florian vs. Joe Stevenson and Nate Quarry vs. Demian Maia rounds out the pay-per-view portion of the show.