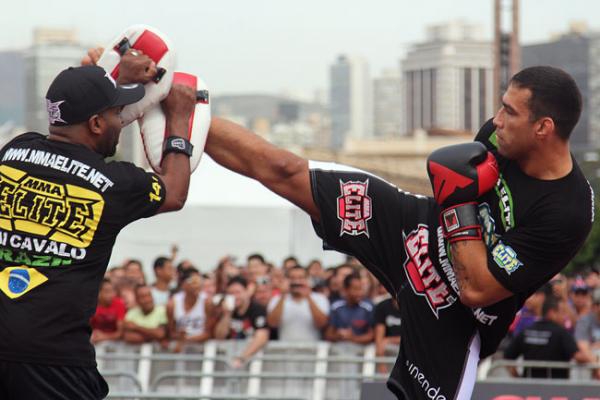 
Ultimate Fighting Championship heavyweight titleholder Cain Velasquez needs a new challenge. That much became evident as he wrapped up his second consecutive lopsided beatdown of former titlist Junior dos Santos in October. What Velasquez needs, UFC on Fox 11 aims to provide, as Fabricio Werdum and Travis Browne square off in Saturday’s heavyweight headliner at the Amway Center in Orlando, Fla., to determine the division’s next No. 1 contender.

While the promise of a future date with Velasquez might seem like cruel and unusual punishment, Werdum and Browne are talented big men with plenty of momentum, something which is not always easy to find in what is arguably the sport’s most marketable weight class. Expect the Werdum-Browne winner to begin drilling defensive wrestling shortly after his hand is raised.

Here is a closer look at the UFC on Fox 11 card, with analysis and picks: 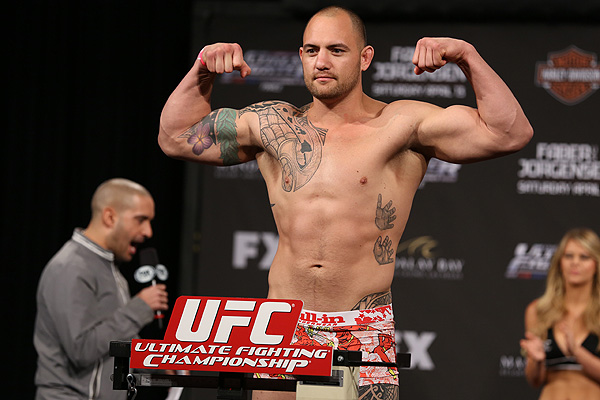 Photo: D. Mandel/Sherdog.com
Browne has won three straight.
The Matchup: Werdum has been inactive since his second-round armbar of Antonio Rodrigo Nogueira at UFC on Fuel TV 10 in June. Initially, a shot at the heavyweight title was the reason for the lengthy hiatus, but when the Brazilian learned that reigning champion Velasquez would not be ready to compete until the second half of 2014, he decided to take a bout with Browne, a rising star who has progressed rapidly in a relatively young MMA career. The winner will presumably receive a shot at Velasquez when the American Kickboxing Academy stalwart fully recovers after undergoing surgery for a torn labrum suffered in his last title defense against dos Santos at UFC 166.

Since returning to the UFC following a 2-2 stint with the promotion from April 2007 to October 2008, Werdum has rattled off impressive victories over Roy Nelson, Mike Russow and Nogueira. He has made huge strides in his striking while training under Rafael Cordeiro at King’s MMA. Most notably, Werdum’s use of knees in the Thai plum and commitment to kicks have helped to make him a more well-rounded contender than the fighter who elected to pull guard at nearly every opportunity in his final Strikeforce appearance against Alistair Overeem nearly three years ago.

However, putting those tools to work against Browne figures to be a different matter entirely. Browne is far more agile and athletic than Nogueira, Russow or Nelson; moreover, “Hapa” will be the taller, rangier fighter when he and Werdum square off in the Octagon.

Some of Werdum’s improvements, such as the willingness to throw hard leg kicks and his more effective use of one-two punching combinations, were better executed when he had a reach advantage. That will not be the case here. Werdum’s tendency to throw kicks without any type of setup could also be a problem, as it leaves him vulnerable to straight-punch counters from the 6-foot-7 Hawaiian.

Werdum is likely to do his most damage on the feet in the clinch. However, Browne’s banner 2013, which included triumphs over Gabriel Gonzaga, Overeem and Josh Barnett, revealed the Jackson-Wink MMA product is about as durable and resilient as they come. After all, he appeared dead in the water after absorbing a barrage of punches and wicked knees to the body from Overeem, a former K-1 World Grand Prix winner. While that means Browne may be tough to put away, he does often find himself fighting with his back against the fence. Of course, some of that may be because he has yet to be taken down in UFC competition, and those who attempt ill-advised level changes near the cage -- like Gonzaga and Barnett -- might find themselves on the receiving end of some vicious elbow strikes to the side of the head.

For Werdum, a black belt in Brazilian jiu-jitsu and judo, it will be crucial to be patient in attempting to get the fight to the floor. The Strikeforce veteran is more likely to attempt trips and throws from the clinch than he is to drop for single- or double-leg takedowns, which is definitely a good thing given Browne’s recent history.

While Browne began MMA as a grappler, his body of work suggests that striking is his forte. Against someone like Werdum, a two-time Abu Dhabi Combat Club Submission Wrestling World Championships gold medalist, avoiding the ground will be paramount to his success. Browne has the kicking game, movement and footwork to control distance, but even the slightest error -- whether it be a slip, an over-commitment to a punch or kick or a temporary lapse in judgment -- could result in Werdum imposing his will on the canvas through a serious of guard passes, transitions and submission attempts. Since we have not seen much of Browne on the mat in UFC competition, it is unclear how he will react against a world-class grappler.

Werdum has only been knocked out once in his pro career, and that came against renowned KO artist dos Santos at UFC 90. There are enough flaws in his footwork, movement and striking to lead one to believe that Browne could become the second to accomplish the feat. However, if Browne cannot avoid the clinch, he risks eating knees and being taken down. The Hawaiian must also be wary of diving into Werdum’s dangerous guard if he hurts the Brazilian during an exchange.

The Pick: Werdum is going to have to be quicker to force the clinch than he has in previous bouts, because trading with Browne at distance is a losing proposition. However, given Browne’s track record, getting the Hawaiian to the mat consistently is no certainty. Browne wins by knockout or technical knockout in round three.