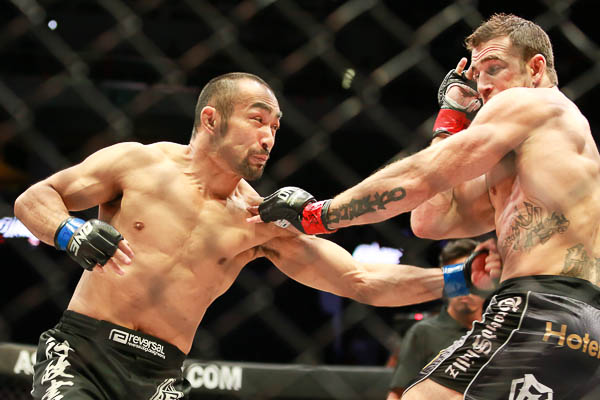 Nobutatsu Suzuki will vie for One FC gold on Nov. 15. | Photo: Taro Irei/Sherdog.com


Editor’s note: In an effort to bring more attention to the global stage of mixed martial arts, this list does not focus on North American-based major promotions such as the Ultimate Fighting Championship, Bellator MMA and World Series of Fighting.

Either Adam Shahir Kayoom or Nobutatsu Suzuki will soon become the answer to a trivia question.

One Fighting Championship will crown its first welterweight titleholder when Kayoom locks horns with Suzuki in the One FC 12 “Warrior Spirit” main event on Nov. 15 at Putra Indoor Stadium in Kuala Lumpur, Malaysia. The main card will be available via Internet pay-per-view, while the prelims will stream live and free to Sherdog.com.

Still an unproven commodity in mixed martial arts circles, Kayoom will carry a three-fight winning streak into the match. The 36-year-old Malaysian arrived on the One FC scene in June 2012 and proceeded to deliver back-to-back victories over Gregor Gracie and Zuli Silawanto. A former muay Thai world champion who has trained extensively with American Top Team, Kayoom holds the rank of black belt in Brazilian jiu-jitsu, tae kwon do and Shorinji Ryu karate.

Suzuki, meanwhile, made his first appearance under the One FC banner in May, when he stopped UFC, Pride Fighting Championships and Strikeforce veteran Phil Baroni on first-round punches. The 36-year-old Japanese striker has spent much of his eight-year career competing within the confines of the Zst organization. Suzuki has delivered all 10 of his wins by knockout or technical knockout, six of them inside one round.

The Kayoom-Suzuki showdown is but one under-the-radar matchup worth monitoring during the month of November. Here are nine more:

American Top Team’s Mocco wrestled collegiately at the University of Iowa and Oklahoma State University, reaching the NCAA finals three times and winning two national championships. The North Bergen, N.J., native qualified for the United States Olympic team in 2008 and nearly medaled at the Summer Games in Beijing. Unbeaten in three pro MMA outings, Mocco last fought at a Resurrection Fighting Alliance event in August, as the 31-year-old heavyweight cruised to a unanimous decision over Bellator and International Fight League alum Lew Polley. Roane will enter the bout on a two-fight skid.

The undefeated Sterling will return from a lengthy injury-induced layoff to defend his CFFC bantamweight championship. A Serra-Longo Fight Team representative, the promising 24-year-old last fought at CFFC 16 in August, when he submitted Sidemar Honorio with a second-round rear-naked choke at the Borgata Hotel and Casino in Atlantic City, N.J. Sterling was a two-time NCAA Div. III All-American at SUNY Cortland, where he was 87-27 with 26 falls during his three-year career, finishing fourth at the NCAA wrestling championships at 133 pounds as a junior and sixth at 141 pounds as a senior. Roberts, 31, owns a 6-1 mark over his last seven appearances.

Smith, who turns 52 in December, will try to push his career record past the .500 mark for the first time since 1994. The Seattle native held the UFC heavyweight championship from July 27, 1997 until Dec. 21, 1997, successfully defending it against David “Tank” Abbott at UFC 15. Smith last fought at Resurrection Fighting Alliance 2 in March 2012, when he knocked out Jorge Cordoba with a brutal third-round head kick. Kovacs has gone the distance only once in 19 professional appearances.

Teenaged prodigy Inoue has emerged as one of the more intriguing prospects in women’s mixed martial arts. The world-ranked Japanese talent burst on the professional scene three years ago, when, at age 16, she won the 2010 Jewels Rough Stone grand prix with consecutive submission victories against Emi Murata and Asako Saioka. Now 19, Inoue will confront a familiar foe in the first round of the Deep “Jewels” lightweight tournament, as he puts her four-fight winning streak at risk against Fujino -- a 32-year-old Pancrase veteran she defeated on the kickboxing circuit in 2010.

Nakamura, who has captured titles in Shooto and Sengoku, has compiled a 9-2 record since being released by the Ultimate Fighting Championship following his split decision loss to Robert Emerson at UFC 81. The 29-year-old will enter his Pacific Xtreme Combat debut on the strength of a five straight wins. Nakamura has secured 13 of his 26 career victories by submission. A protégé of former two-division UFC champion B.J. Penn, Nelson, 28, will look to avoid the first three-fight losing streak of his career. The Hawaiian was a quarterfinalist on Season 8 of “The Ultimate Fighter.” 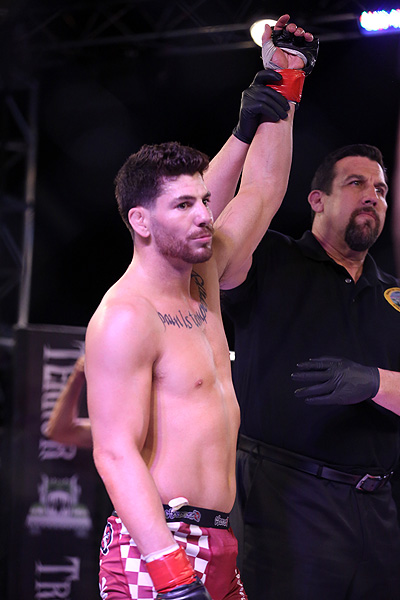 Papazian and Doane will lock horns for the Tachi Palace Fights interim bantamweight championship. A former King of the Cage titleholder, Papazian made three failed appearances inside the UFC’s Octagon in 2012 -- he lost to Mike Easton, Dustin Pague and Tim Elliott -- but has since righted his ship. In Doane, he collides with one of the sport’s top prospects at 135 pounds. The Hawaiian has delivered eight of his 10 wins by knockout, technical knockout or submission, six of them inside the first round. However, Doane finds himself on the rebound following a disappointing split decision defeat to Kyle Aguon at a Pacific Xtreme Combat show in August. Tachi Palace Fights 17 will stream live and free to Sherdog.com.

Cejudo appears to be on the fast track to stardom. In 2008, he became the youngest American wrestler ever to strike gold in the Olympics when he did so at the age of 21. Cejudo has had no problem transitioning from amateur wrestling to MMA, as the 26-year-old Californian has started his career a perfect 5-0. After finishing his first four opponents in the first round, Cejudo went the distance for the first time in October, when he posted a unanimous verdict over Ryan Hollis at Legacy FC 24. DeLeon, a Bellator and Strikeforce alum, will enter his first Legacy Fighting Championship appearance since 2010 on a four-fight losing streak.

Hard to believe Smith once headlined an EliteXC event on network television. After his career took a troubling turn in Strikeforce, “Hands of Stone” finds himself back on the regional circuit in his native California. The 34-year-old returned to the winner’s circle in August, as he stopped Mark Matthews on second-round punches for his first victory since December 2009. The once-beaten 27-year-old Griffin heads into their clash as the lesser-known talent, a 2012 knockout of Jaime Jara his claim to fame.

The first man to wear Bellator gold at 135 pounds, Makovsky will tangle with Manzanares for the vacant Resurrection Fighting Alliance flyweight crown. The 31-year-old Bethlehem, Pa., native rebounded from consecutive losses to Eduardo Dantas and Anthony Leone at Cage Fury Fighting Championships 24 in May, when he captured a unanimous verdict over Claudio Ledesma in his debut at 125 pounds. Makovsky wrestled collegiately at Drexel University, where he was a four-year letterman and captained the wrestling team as a senior. Manzanares raised eyebrows two months ago, as he submitted the highly regarded Steve Swanson with a second-round armbar at RFA 9.