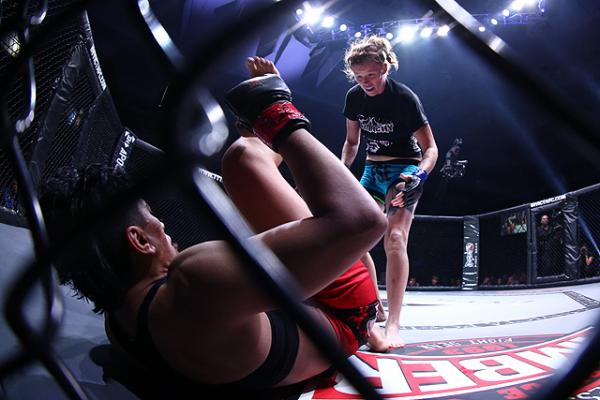 Tonya Evinger has not lost a fight in more than four years. | Photo: Dave Mandel/Sherdog.com

When Tonya Evinger submitted to a Gina Carano rear-naked choke under the EliteXC banner in 2007, few could have envisioned her becoming one of MMA’s premier women’s bantamweights. Nevertheless, her rise has been steady and real.

Evinger will defend the Invicta Fighting Championships bantamweight title against the unbeaten Pannie Kianzad in the Invicta 14 headliner on Sept. 12 at the Municipal Auditorium in Kansas City, Mo. The 34-year-old “Triple Threat” will carry a seven-fight winning streak into the cage, along with a perfect 4-0 mark inside Invicta.

An Oak Grove, Mo., native, Evinger last competed at Invicta 13 on July 9, when she put away Irene Aldana with fourth-round punches to claim the organization’s vacant bantamweight crown. She wrestled collegiately at Missouri Valley College, an NAIA school in Marshall, Mo., and has parlayed those skills into a successful MMA career. Evinger appeared on Season 18 of “The Ultimate Fighter” and tapped to a Raquel Pennington guillotine choke in the elimination round, but she has not suffered an official defeat since dropping a decision to Sarah Kaufman more than four years ago. She has secured 13 of her 16 professional victories by knockout, technical knockout or submission.

Kianzad, a Cage Warriors Fighting Championship titleholder, has touched off her career with eight consecutive wins. The 23-year-old Iranian-born Swede operates out of the Rumble Sports camp, where she trains alongside UFC vets Nicolas Dalby and Mats Nilsson. Kianzad made her promotional debut at Invicta 13 in July, when she took a three-round unanimous verdict from Jessica Rose-Clark.

The Evinger-Kianzad title tilt is but one outside-the-major-MMA-bubble matchup worth monitoring during the month of September. Here are nine more:

Todhunter flirted with the UFC as a short-notice replacement for Hector Urbina at UFC 188, but his bout with Albert Tumenov was canceled when he was deemed medically unfit to compete because of a harsh weight cut. Now, Todhunter returns to more familiar haunts, as he meets Smith in a Legacy Fighting Championship main event. “The Sniper” has finished all seven of his opponents, five of them inside one round, but needs another victory to remain on the UFC radar. Smith, who has competed in Bellator and Strikeforce, has lost three of his last five fights.

Rizzo, 41, returns from a two-year absence to confront Flores -- a short-notice replacement for heavyweight journeyman Travis Fulton -- under the Face to Face banner in Brazil. “The Rock” fought for the UFC title on three different occasions in his heyday, losing to Kevin Randleman and Randy Couture (twice). Rizzo -- who has not won a fight since he stopped Ken Shamrock on first-round leg kicks and punches in July 2010 -- will head into the match on the heels of back-to-back losses to Satoshi Ishii and Fedor Emelianenko. Flores last competed at a Peru Fighting Championship event in May, when he succumbed to third-round punches from Johnny Walker.

Kankaanpaa was given little time to mourn the loss of her Invicta Fighting Championships strawweight title. The 34-year-old “Killer Bunny” finds herself back in the cage less than five months after she surrendered the 115-pound gold to Livia Renata Souza at Invicta 12. The defeat was just the second of Kankaanpaa’s career and brought an end to Finnish export’s modest two-fight winning streak. Bennett carries a perfect 7-0 record that includes a February 2013 victory over “The Ultimate Fighter” Season 18 winner Julianna Pena. 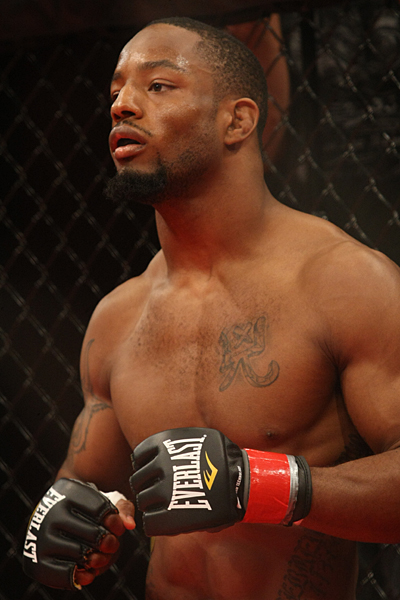 The undefeated Harrison will put the Titan Fighting Championship featherweight crown on the line for the first time when he takes on Green in the Titan 35 co-main event. “The Bull” captured the 145-pound belt with a five-round unanimous decision over Kurt Holobaugh on July 18 and holds other notable victories over Cody Bollinger and Jeff Lentz. Green, a Bellator veteran and former Titan champion, won for the sixth time in eight fights at Titan 34 in July, when he wiped out Vincent Eazelle in just 32 seconds.

Duquesnoy has little left to prove on the regional circuit, but he will nevertheless defend the British Association of Mixed Martial Arts featherweight championship against Loughnane. Regarded by many as the top prospect in the sport at 145 pounds, the 22-year-old Frenchman last competed at BAMMA 18 in February, when he took out Krzysztof Klaczek with a third-round body kick and punches. Duquesnoy has delivered eight of his 10 pro wins by knockout, technical knockout or submission. Loughnane has won five in a row since dropping a decision to Mike Wilkinson at UFC on FX 6 in 2012.

M-1 Global heavyweight champion Tybura’s stock took a hit on May 2, when he suffered his first career defeat in a third-round technical knockout against Stephan Puetz in an organizational super fight. Still only 29, he benefits from competing in a division starved for young talent and can re-establish himself in short order with a successful title defense. Tybura had finished 10 of his previous 12 opponents, including Denis Smoldarev, Damian Grabowski and Maro Perak. The 25-year-old Delija will hit the ring on the strength of five consecutive victories.

The Ring of Combat bantamweight crown will be up for grabs when undefeated champion Arce meets the once-beaten Pope. Spawned by the Team Tiger Schulmann camp, Arce has emerged as a blue-chip talent inside the New Jersey-based promotion. The 25-year-old last appeared at Ring of Combat 51 on June 5, when he earned a three-round unanimous decision over Michael Imperato. Pope, 28, has rattled off back-to-back wins against Kyle Newson and Thad Frick since submitting to a Bill Algeo rear-naked choke a little more than a year ago.

Nunes has long been viewed as a potential future star, but hiccups against Joachim Christensen, Scott Askham and Jason Jones have slowed his rise. The 26-year-old Swede will now try his luck at 205 pounds, as he returns to the Abu Dhabi Warriors organization for the second time in 2015: Nunes put away Rene Wollinger with a third-round knee and follow-up punches at ADW 2 in March. The well-traveled Monteiro has competed in the Sengoku, Deep, Jungle Fight and Shooto Americas promotions. However, he has not fought since he took a unanimous decision from Yuya Shirai at One Championship 3 in March 2012.

Jadambaa sank his teeth into the One Championship featherweight title in August 2014, when he banked a five-round unanimous decision against Koji Oishi. Now comes the difficult part, as the 39-year-old will defend his championship against the undefeated Gafurov. Jadambaa has won 10 of his last 11 bouts dating back to September 2007 -- a run of sustained success that includes victories over Akihiro Gono, Kazunori Yokota, Yui Chul Nam and Honorio Banario. Gafurov, a former M-1 Global champion, has finished eight of his first 11 opponents, six of them via choke.

This item was updated on Sept. 9 to reflect a change in opponent for Rizzo.