Santos waxed on her upcoming bout, how her training has changed since moving to San Diego, why she only trains with men, and cleared the air on the offer she got to appear in Playboy magazine.

Sherdog.com: Since moving down to San Diego in November, how has your training changed?
Santos: I’m training at The Arena in San Diego with Rafael Alejarra for conditioning, Billy for muay Thai, and Javi Vazquez for jiu-jitsu. Javi comes down three times a week because he’s training with Rafael and Billy, too, for his March 6 fight (at WEC 47). I’d also like to add that I’m still a member of Chute Boxe and I want to thank them for their continued support. I’m planning on staying in San Diego for a while. I love it! It’s close to the beach and there’s a lot of people walking the streets. The weather, the climate, and the whole feel of it reminds me a little of Brazil.

Sherdog.com: Is your husband, Evangelista “Cyborg” Santos, training you for your upcoming fight?
Santos: No, he had a fight in Brazil at the beginning of December. He’s fought and now he’s taking care of some paperwork to bring his daughter to live with us here.

Sherdog.com: You seem to train exclusively with men. Do you ever get a chance to work with females?
Santos: No, just with men. I prefer to train with men. I feel more comfortable. I’m afraid of hurting the women.

Sherdog.com: Kerry Vera, who also fights for Strikeforce, trains at her husband’s gym in San Diego. She seems to be a competent striker. Would you be interested in training with her?
Santos: Yes, I would actually.

Sherdog.com: If you had the opportunity to train with any male fighters, who would they be?
Santos: I would really like to train with B.J. Penn. I really admire his fighting skills and his ground skills. He’s someone I admire overall as a fighter. Maybe I’ll train with him someday. That would be fun. I’d also like to train with Fedor Emelianenko. I think that he rocks. He’s really strong and delivers the knockout. I love his little baby face. He kicks ass and makes it fun. I’d love to train with this baby-face. 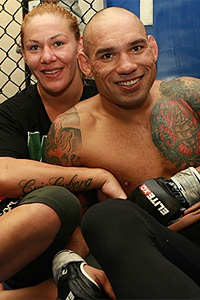 Dave Mandel/Sherdog.com
Cris and Evangelista "Cyborg."
Sherdog.com: Do you mind being called “Cyborg,” especially when it refers to a half-human, half-machine organism that lacks emotion?
Santos: I have literally adopted that name from my husband. It’s like a last name for me now. I don’t event think about (the definition). I feel like everybody around me knows I’m emotional during my fights. That’s what matters.

Sherdog.com: Your first-round victory over Gina Carano was quite definitive. Do you experience any added pressure thinking that fans will expect a similar performance on Jan. 30?
Santos: I don’t really go in with a plan of how the fight will go. I just try to go in and do a good show for everybody and just play what’s happening by ear, but I’m always looking for the knockout. I’m not really worried about what other people are thinking or what I’ll do in this fight or the next. I’m just thinking of the fight in front of me and what I’m going to do to win this fight.

Sherdog.com: How do you anticipate this fight going compared to what happened with Carano?
Santos: I've seen some of Coenen’s fights and she likes to stand up. She wins some of her fights by submission. I’m just going to go over to her and exchange with her, get a feeling for what she’s doing and go for my knockout. I’m always prepared to go in. I’m always hoping that I’m going to get a really good fight and a really good exchange. I’m always prepared for my five rounds, but for some reason, my fights keep ending in the first round.

Sherdog.com: You injured your shoulder at the Abu Dhabi World Submission Grappling Championships last September in Barcelona, Spain, which prevented you from fighting on Strikeforce’s November card on CBS. What happened there?
Santos: Competing in Abu Dhabi with the experience level there really allowed me to work on myself. I always want to do Abu Dhabi and to stay active. I’ve always had a little thing with my shoulder because of playing handball. As an athlete, you know they all have a little thing that bothers them, but it’s nothing major. I let it rest a little bit, did a little rehab and now I’m back 100 percent.

Sherdog.com: Playboy had made an inquiry about you posing nude in their magazine. How did that pan out?
Santos: (Silence)

Sherdog.com: Was it an embarrassing story for you when it was revealed?
Santos: Yeah, for sure. I heard people were talking about it on the Internet and I probably commented to only two or three people that knew about it. Less than 24 hours later, I went online and saw my picture with everyone talking about the Playboy (offer). I just wanted to die! I went into desperation mode: how did everybody know about it? It was very, very uncomfortable because it wasn’t something I’d said yes to. It was just a possibility. I hadn’t even had a chance to talk to my husband about it, but once I did, he wasn’t very happy about it at all. It wasn’t supposed to come out. It was literally just one conversation I’d had with one person. I don’t think it’s what I need to be focusing on right now, especially since Cyborg isn’t too happy about it.

Sherdog.com: You’ve lived in the U.S. for eight months now. What’s been the hardest thing to get used to?
Santos: I think language has got to be the biggest barrier for me. I’m taking classes and slowly learning English. I’m slowly getting there. I have friends who help me with all the stuff I need. I’m learning how to live the American way and I want to live here and build my history and my life in this country.

Special thanks to Rose Gracie for the translation.