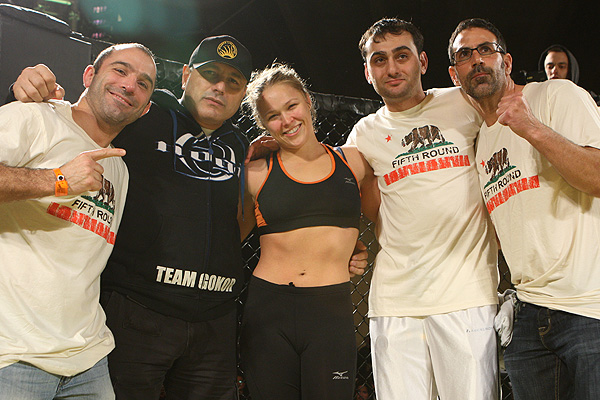 Rousey has waged a verbal war against Tate and views it as part of her pre-fight strategy.

“I think of it as the fight starts as soon as it’s announced, and all of this has a psychological effect,” she said. “Every time we do a joint interview or joint thing, I always try to get under her skin as much as possible. Every single time we’ve done a debate or interview, I always try to just get a couple jabs in on her just to bug her because I know that I’m wittier and more well-spoken than her, and she knows it, too. So whenever I catch her in an interview and kind of make her sound dumb, I know she’s getting used to being owned by me on the regular [basis].”

Rousey believes Tate is unaccustomed to this type of overt confrontation with her opponents and takes the champion’s ignoring her at joint events as a sign that she is winning the mental battle. Tate, of course, disagrees with her assessment.

“How stupid is it to say, ‘I’m playing head games. I’m winning a mental battle?’ Why would you even say that?” Tate asks. “When you acknowledge that, when she says she’s doing that, then she’s not doing that, because she’s making the whole world aware. It’s not like she’s trying to trick me. We all know that she’s trying to play head games, but she’s so stupid about it. I just roll my eyes and laugh at her and say, ‘OK, whatever.’”

Tate also points out that talking as much trash as Rousey has put a lot of pressure on the challenger to back it up.

“It’s just going to be interesting from the fan’s perspective to see if Ronda can actually live up to that or whether she’s just kind of blowing smoke,” she said. “The fact that I don’t like her, I can’t stand her and I really want to put a hurting on this girl, I think, is going to make for a more exciting fight, as well.”

“I think it’s so funny that she’s so down to talk a bunch of trash about me, she’s down to retweet a lot of the trash talk about me and she doesn’t have the balls to look at me or say anything to my face,” the challenger said. “I just find that hilarious.”

Tate has admitted to ignoring Rousey at joint promotional events.

“I don’t really give her the time of day. I don’t look at her. When you don’t like someone, you just don’t really have anything to say to them, and you just don’t want to interact with them,” she said. “That’s kind of where I’m at because I have to maintain a level of professionalism, so I opt out of even acknowledging that she’s there. That’s how I deal with the situation, because I don’t have anything nice to say to her, so I just won’t say anything at all.”

As far as eye contact, Tate was quick to point out that not every fighter has the same approach.

“I’m going to ignore her, and when the weigh-ins come, that’s when I like to get my focus on and [be] ready,” Tate added. “But it’s funny because every time we have had to make eye contact she seemed very nervous and very uncomfortable -- shaking a little bit. She’s always the first one to break eye contact.”

Oddsmakers have installed Rousey as the favorite despite her lack of MMA experience. Tate views the slight as a product of the hype.

All of this is just kind of
a crescendo of every single
obstacle and hardship I’ve
ever had so far, and I feel like
life has been pulling me in this
direction all along.

“I think it’s really stupid that I’m the underdog considering everything,” she said. “I just think everyone’s kind of wowed by her and her Olympic background. People don’t do the research. Yeah, she’s won all these fights by armbar within a minute, but who has she fought? She also lost her bronze medal match in the Olympics but still got a bronze because they give out two bronze medals.

“Now I’m not saying that’s discrediting her accomplishments, but I’m just saying that everything she has behind her is a lot more hype than what it really is,” Tate added. “I just think that Ronda has a ton of hype going in, and I think she has a really big head. I think she’s buying into it, too. Everyone’s jumping on her bandwagon, and my job is basically to go in there and give her a dose of reality.”


Rousey, on the other hand, feels everything has been pushing her towards the bantamweight title.

“All of this is just kind of a crescendo of every single obstacle and hardship that I’ve ever had so far, and I feel like life has been pulling me in this direction all along,” she said. “I’m meant to be here, and I’m meant to win this.”