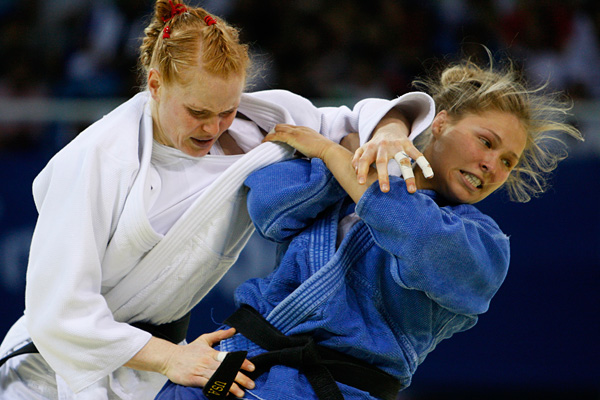 During the buildup to the Strikeforce “Tate vs. Rousey” main event on Saturday, there were murmurs -- especially in the women’s mixed martial arts community -- that Ronda Rousey had talked her way into a title shot and ascended to the top of the division much faster than a person with her limited resume normally would.

Not surprisingly, her most vocal detractor was bantamweight champion Miesha Tate, who noted that two contenders on the show’s undercard -- Sarah Kaufman and Alexis Davis -- were more deserving of main-event status than the outspoken Rousey. After a victory over Davis in an entertaining three-round slugfest a couple of hours earlier at the Nationwide Arena in Columbus, Ohio, Kaufman made a thinly veiled reference to the same point.

“You don’t want to see two girls parading around not fighting -- just talking,” she said in a post-fight interview.

It is true: the back-and-forth between Tate and Rousey was often little more than a series of she-said, she-said quotes that built hype for a pivotal moment in the women’s sport. However, if there was any doubt beforehand, there is none now. Rousey talks a good game, but she fights an even better one.

Against Tate, “Rowdy” fought longer and was hit more often than she had been in her four previous professional bouts, and she even escaped a rear-naked choke attempt. Still, when all was said and done, Rousey ended the fight as she normally does: with an armbar. The collection of limbs on her record is already enough to make Rousimar Palhares jealous, and her latest outing was particularly brutal, primarily thanks to Tate’s resilience. The Yakima, Wash., native managed to survive and escape Rousey’s first submission attempt, although her arm looked to be gruesomely contorted in the process.

“I didn’t feel like it was in,” Rousey later explained to Sherdog.com in a video interview. “I wasn’t that disappointed that I lost it because it didn’t feel very secure from the beginning.”

Apparently, looks can be deceiving. It would not take long for a sequel, however, as the Olympic judoka applied her trademark maneuver again late in the opening round. Referee Mark Matheny elected to let the champion go out on her own terms, even as her arm continued to bend at a stomach-churning angle. Tate held out for as long as she could, but the writing was on the wall. “Takedown” finally tapped at the 4:27 mark, and medical personnel immediately rushed to her attention.

As she paced back and forth in the cage, the adrenaline of the moment gradually beginning to wear off, Rousey cast furtive glances of what appeared to be concern toward her fallen opponent -- or maybe not.

Cristiane “Cyborg” Santos
Cyborg may be in Rousey’s future.
“She’s good; she’s legit, but I don’t feel that bad about it,” Rousey said.

Rousey and Tate did not exchange words or share an embrace in the aftermath, a sign that bad blood still exists between the two women. The newly crowned champion cited their face-to-face confrontation at weigh-ins as the reason for the lingering animosity, at least on her part. The incident, which looked like run-of-the-mill weigh-in bravado, was something Rousey took personally.

“I was willing to give her the benefit of the doubt, since I kind of started [the bad blood between us], but after weigh-ins, when she got in my face and I pushed her back and she said I should be fined for head butting her ... if you’re going to try to act hard, just follow up with it. Don’t pull back and say I should get a fine. I thought that was kind of messed up,” Rousey said.

Ladies and gentlemen, meet the new face of women’s MMA. Rousey is a starter and a finisher; a world-class athlete and trash-talker; a loving daughter and one hell of a fighter. She is, for lack of a better phrase, refreshingly awesome.

Some say Rousey’s star rose too quickly. In reality, it could not have risen fast enough. Some people are natural luminaries, whether those around them like it or not. Through circumstance, talent, fate or all of the above, they quickly rise to the top. It is why Jeremy Lin has less than 20 career starts and two Sports Illustrated covers. It is why Tebowing became a national phenomenon for a few weeks last fall. It is why a woman who once struggled with her speech received a title shot after just four professional fights.

Take away the brilliance of Rousey and the toughness of Tate from the event and your top two storylines are: a potential No. 1 contender for Gilbert Melendez who described his co-main event performance as “s---” and a registered sex offender with white supremacist ink who somehow slipped past the Zuffa LLC background check to make it onto the undercard.

For a short-time promotion with limited potential, Rousey is a Godsend. The California native still considers Gina Carano to be the figurehead of the sport, but to carry the torch for a collection of fighters, it is best if one fights herself. If Carano watched Rousey against Tate, it is unlikely that she is itching to return to action. Major motion pictures pay better anyway.

Outside of a Carano comeback, there are two fights that make sense for Rousey. Kaufman, who landed 135 total strikes in her win over Davis, can test Rousey’s standup in ways that Tate could not.

Looming on the horizon is a blockbuster with Cristiane Santos. The marketing potential is unlimited there, as “Cyborg” will be returning from a year-long California State Athletic Commission-mandated suspension, and Rousey, who has already had some choice words for the Brazilian regarding her use of performance-enhancing drugs, will have had time to improve other aspects of her game. Santos will serve her suspension until Dec. 16, making it unlikely that she will compete in 2012. Strikeforce will fulfill its Showtime contract at the end of this year, and the promotion’s fate after that is anybody’s guess.

New organizations like the recently founded Invicta Fighting Championships, an all-women’s promotion, will offer viable alternatives if Strikeforce folds. The women’s division as a whole is still building depth, but its brightest talents deserve a bigger stage. An all-female “Ultimate Fighter” cast and the occasional bout on a UFC preliminary card would serve as a significant building block for that depth. Rousey-Cyborg is not a headliner, but it could fit nicely into an early slot on pay-per-view.

The possibilities are many, but it is clear that Rousey needs to be included in any future Zuffa-related plans, both for her talent and for analysis like this: “I’m not a doctor, dude, but that didn’t look fun,” Rousey said of her championship-clinching armbar on Tate.

Not fun for her opponents, to be sure, but Rousey’s reign of collecting arms and taking names is plenty enjoyable for her fans, and it looks like it is only just getting started.