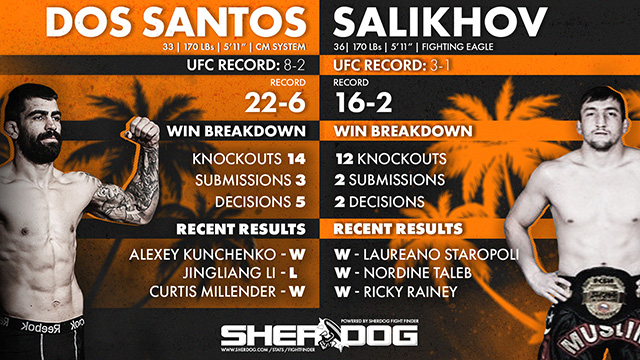 Hopefully. Salikhov has overcome a rough start to his UFC career. As one of the best sanda practitioners in history, Salikhov came into the Octagon with a reputation for flashy violence, but he was grounded and submitted by Alex Garcia in his first UFC appearance. Since then, “The King of Kung Fu” has gotten the opportunity to show off his wares, scoring brutal knockouts of Ricky Rainey and Nordine Taleb before teeing off on Laureano Staropoli in his most recent outing. Salikhov looks to make it four straight wins against Zaleski dos Santos, who suddenly finds himself at a bit of a crossroads. He was long one of the most underrated members of the UFC roster. After losing a narrow decision to Nicolas Dalby in his UFC debut, the Brazilian kept reeling off win after win in consistently excellent fights. A dominant victory over Curtis Millender in a co-main event assignment in March 2019 seemed to finally get “Capoeira” over the hump in terms of notoriety, but things have gone sideways since. Zaleski dos Santos’ next bout was a confrontation against Jingliang Li in China—a shockingly poor performance from Zaleski dos Santos and a standout effort from Li that resulted in the Brazilian suffering a late knockout. While Zaleski dos Santos scored a win over Alexey Kunchenko in March, it was not the usual electric affair the Brazilian brings to the table, as he relied on the clinch and takedowns to earn a tepid decision. If this is the new Zaleski dos Santos, it means Salikhov is going to get the fight he wants, at least on the feet. The Russian can uncork some brutal blows, but he tends to fight at a slow pace while he sets up his next move. That is probably enough to favor Salikhov. Zaleski dos Santos’ wrestling remains a concern, but he did so little with it against Kunchenko that even if this fight turns into a grind, Salikhov should manage to do enough damage in the moments where the two are separated that he can win the necessary rounds. The pick is Salikhov via decision.