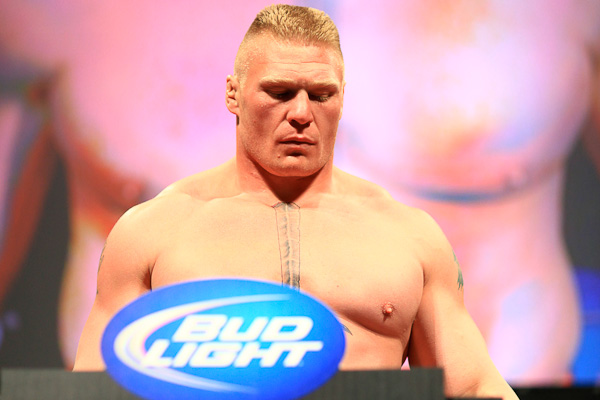 
After Lesnar stopped Randy Couture with a series of hammerfists at UFC 91, a bout between the former World Wrestling Entertainment superstar and Emelianenko instantly became the next big thing on the MMA horizon. By the time Lesnar decimated Frank Mir at UFC 100 to establish his place as a bona fide pay-per-view giant, Emelianenko-Lesnar had the potential to be the biggest fight in the history of the sport, at least in terms of gate and buy-rate figures.

While Lesnar was coming off impressive wins against Mir and Couture, Emelianenko had further added to his mystique with triumphs over former UFC rulers Tim Sylvia and Andrei Arlovski under the Affliction banner. The two heavyweights could not have appeared more different to the outside observer. Lesnar was the brash professional wrestler who received a title shot after just two Octagon appearances, while Emelianenko was the all-time great looking to further cement his legacy on MMA’s biggest stage.

Before Lesnar was weakened by battles with diverticulitis and Emelianenko lost some of his luster in the Strikeforce cage, this was going to be the UFC’s next blockbuster hit. Who would have been the favorite in such a titanic clash? Prominent oddsmaker Joey Odessa opened the betting lines for the proposed bout in 2009 with “The Last Emperor” as a -240 favorite.

“Whether I get a chance to fight Lesnar in the future or not, that fight will be about me taking advantage of those weaknesses,” Emelianenko said. “Any opponent that he has in the future, for them to prevail would be for them to take advantage and capitalize on mistakes that he makes. Like every fighter, he’s certainly prone to them and I see that.”

The speculation turned out to be all for naught, however, when the UFC failed in multiple attempts to lure Emelianenko to the promotion. To make the match happen today, Lesnar would have to leave the WWE and Emelianenko would have to be coaxed out of retirement. You can bet that if their names showed up on a fight poster tomorrow, more than a few people would still be interested.