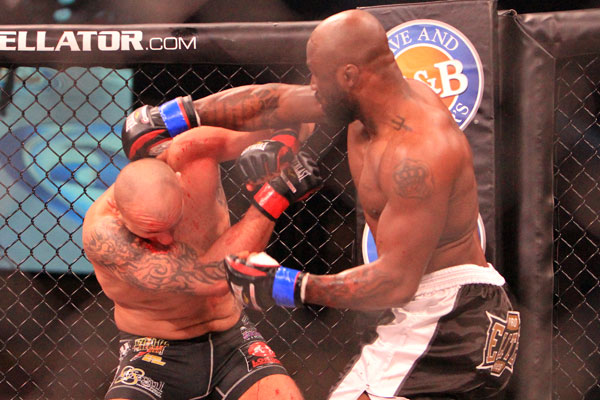 
Bellator 86 was the stage for the return of Bellator stars Muhammed Lawal and Ben Askren.

Needless to say, either man disappointed.

Here’s how the MMA community reacted on Twitter in real-time as Bellator 86 unfolded live on Spike.com and Spike TV.


A blind chiropractor could have told you it was time to stop that fight. At least the bloodbath is over. Get Amoussou some ice & morphine.


I like Ben Askren because of how easily he infuriates all the right people. I can respect and enjoy that! I mean, not for 25 minutes though.


In his collegiate wrestling career, Askren would get into positions where I saw no way out without being taken down. He always found one.


I don't want to be the one to tell him, but I'm not sure how well the tough guy act works for Karl Amoussou once that French accent emerges.


Lawal did exactly what he was supposed to do, but the bar is so high. Anything other than three whippings would be a disappointment, no?


King Mo just had Coleslaw for dinner.Yep, I went there. KO for the King. #Bellator


I'm worried for @kingmofh with this pro wrestling stuff. Just saw a guy get whacked with a hammer to the back of the knee. Scary.


Whoever is mic'ing up the cage for Bellator this season deserves a raise. Adds such a great dynamic when watching fights.