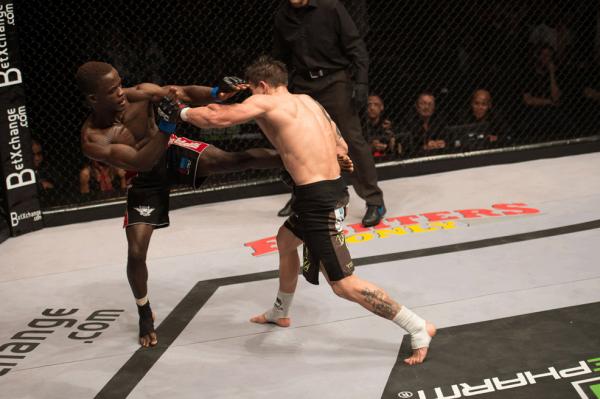 Some might say Demarte Pena was born to fight. | Photo Courtesy: EFC


Plenty of fighters come from a long line of martial artists and have either siblings or parents in combat sports, but Demarte Pena is from a fighting family of a completely different nature.

The undefeated former Extreme Fighting Championship Africa titleholder hails from the most prominent military family in Angola. His grandfather, Jonas Malheiro Savimbi, founded and led the National Union for the Total Independence of Angola, fighting in numerous conflicts until his death in 2002. Pena’s father, Arlindo, was a UNITA general who, like Savimbi, paid the ultimate price for his dedication to the movement: He was fatally poisoned in a 1998 incident that prompted the family to flee Angola for the safety of South Africa.

Given his family’s history, Pena might have been expected to pursue a more peaceful career. However, he claims martial arts helped keep him on an even keel after he moved to a strange country under such tragic circumstances at age 9.

“As a young boy, I was always seen as a troublesome kid and I got into a lot of trouble and had some near-death experiences,” Pena said. “Due to that, I’m sure my family expected me to end up doing something extreme, but martial arts has shaped me into a respectful man and they are pleased with the man I’ve become.”

Pena was just 12 when his grandfather was killed. Savimbi had reportedly survived dozens of assassination attempts during the guerrilla war he waged against Portuguese colonial rule in the 1960s, the decolonization conflict in the 1970s and finally the 27-year-long Angolan Civil War, which ended a few weeks after his death. With two generations of his family blighted by such tragedy, Pena’s upbringing was undeniably traumatic, but he believes he was too young to fully understand what was going on around him at the time.

“The war in Angola was a traumatic ordeal for all Angolans, but as a young boy I didn’t know the complexities and magnitude of the whole situation,” he said. “I guess ignorance was bliss.”

Pena could easily have ended up following in the family tradition by pursuing a military career himself.

“I’m sure I was going to be doing something similar to what my grandfather and father did [and] probably just follow their footsteps,” he said, “but now [the war] is all over. I have new goals and new visions for my life.”

Instead, he has dedicated himself to becoming proficient at a completely different type of conflict. His interest in competitive combat sports began at an early age.

“I’ve always been an active young boy, and this journey eventually led me to martial arts,” Pena said. “I started with karate when I was around 6 and was always looking for the next best thing.”

“
The war in Angola was
a traumatic ordeal for all
Angolans, but as a young
boy I didn’t know the
complexities and magnitude
of the whole situation.

With Angola at peace, he set about pursuing his martial arts interests in South Africa, where he was first introduced to MMA as a schoolboy.

“I started off in 2006 after I was messing around at school with a few friends and I got armbarred,” Pena said. “I vowed to become a better-rounded athlete, and I started learning wrestling and jiu-jitsu.”

Pena made his professional MMA debut at EFC 7 in February 2011, submitting Mawande Mazithambe with a rear-naked choke in just 27 seconds. He says he ended up signing with the burgeoning South African promotion almost by accident.

“I had a successful amateur career, and the most logical step was to go pro,” Pena said. “My coach told me that there was a pro fight [on a] Thursday and they needed a replacement fighter. It was already Tuesday and I was not ready for the fight, but I took it anyway and managed to win in the first round via submission. It was a great moment.”

Pena has been winning fights ever since. He claimed the EFC Africa featherweight belt with a unanimous decision over Leo Goss in just his third bout. Pena admits he will always cherish the moment when the title was placed around his waist after five hard-fought rounds.

“After working so hard for something, you get a feeling inside you, a certain feeling of assurance,” he said. “I trained very hard and I expected to win. It was great to win, as all the hard work was not in vain and it paid off.”

Pena has spent his entire career inside the EFC Africa organization and successfully defended the featherweight crown five times. However, he recently made the difficult decision to relinquish his title rather than accept a mandatory defense against one of his training partners. Although the decision to drop to 135 pounds was only made when it became clear he could no longer keep the belt without facing teammate Boyd Allen, the 24-year-old feels the lower division suits him better physically.

“I’m a natural bantamweight, but I’ve competed at 145 [pounds] because there was no 135 division at EFC Africa when I started as a pro,” Pena said. “I became champion and remained [champion] for almost four years, with five successful title defenses, but my training partner, who is a natural featherweight, became the number one contender. We train together and neither of us was willing to change camps, so I decided to drop and fight at my natural weight so he can fight for the 145-pound belt.”

The 135-pound title is currently the property of Nkazimulo Zulu, who won the vacant championship by stopping Charlie Weyer at EFC 27. Pena has been promised an immediate shot at him when he makes his bantamweight debut, which is currently penciled in for July. No fighter has ever held EFC Africa belts in two different divisions, so Pena will have the opportunity to make a small piece of history when he fights Zulu and puts his perfect 8-0 record on the line against him.

South Africa’s MMA scene is thriving and there are a number of quality fighters emerging from it. Former EFC Africa heavyweight champion Ruan Potts made his Ultimate Fighting Championship debut at UFC Fight Night “Brown vs. Silva” on May 10 in Cincinnati. Although Pena still has plenty to achieve in South Africa, the Angolan concedes he wants to follow in Potts’ footsteps and compete on the global stage.

“My goal is to dominate in the African continent,” he said, “and then the most logical step will be to compete overseas.”

Now that the country of his birth is no longer ravaged by war, Pena is able to safely return to Angola. People there have begun following his MMA career.

“Almost all my family is in Angola; most that relocated during the war have either gone back or are contemplating going back and they all support me, which is a blessing,” he said. “The war is over and we are leading into new ways of thinking. There is still some form of invisible separation from north and south, but slowly those ideals will fade out and we will get a more united country.”

While his family’s history is permanently entangled with Angola’s troubled past, Pena has spent his entire adult life in South Africa. He has become one of the country’s most recognizable mixed martial artists and believes the sport will only grow in popularity in the region. If he can win the EFC Africa bantamweight championship in July, his star will only burn brighter.

“MMA is exploding here in South Africa and in Africa as a whole,” Pena said. “EFC Africa has made us fighters into stars and even when I go back to Angola, many people recognize me and show their appreciation.”