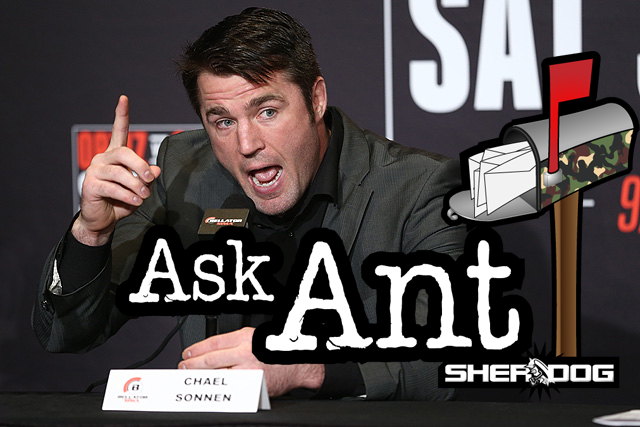 Chael Sonnen is in rarefied air as far as his opponents are concerned. 13 of them have held a major world title at some point. When he steps in the cage at Bellator 208 Saturday night, Fedor Emelianenko will bump that number up to 14.

Sonnen’s strength of schedule is second to none in mixed martial arts. However, the outcomes and timing of those a lot of those fights simply can’t be ignored. For all the champions he has faced, Sonnen has yet to claim to any belts for himself. While Paulo Filho’s personal issues and failure at the scale got in the way of what would have been a title victory at WEC 36, the West Linn native has no rightful claim to a championship.

Even his defining moment, the 24 minutes of utter domination over Anderson Silva, has an asterisk attached to it. Beyond the fact that Silva’s Hail Mary triangle armbar forced a late stoppage, had Sonnen survived to hear the final bell it would’ve been a moot point anyway. His elevated T/E ratio would have invalidated the victory and given “The Spider” his belt back. The only thing left for his title reign would’ve been the few moments between Bruce Buffer shouting “And new” and lab results being handed to the California State Athletic Commission.

Sonnen was never able to reach the peak of the sport for a variety of reasons. At the end of the day, one of those reasons is that he did face the best of the best as consistently as possible. While he will never be on MMA’s Mount Rushmore, as a box office draw and broadcaster, Sonnen has definitely left his mark on the sport.

The Witcher asks: A win over Diaz (not a given) for McGregor would propel him right back in the spotlight for basically any matchup he wants in the UFC. Do you think this would be the next fight to make for the Irish star and should he win, who would you match him up with next?

The trilogy fight with Nate Diaz would be undoubtedly be a great momentum changer for Conor McGregor. The moment that fight was made official, we’d quickly forgot about him tapping out last week. And just in case some vague memories of a Dagestani freight train still existed, all it would take is a Stockton and Dublin reunion and a microphone to make us remember why these two are MMA’s dynamic duo.

However, that fight is always available. As long as both guys are able to compete, it’s a guarantee that the pairing will draw eyeballs. For that reason, the Diaz is very good but it’s not the best fight for McGregor right now.

Instead, let’s take a page from boxing and hook McGregor up with a tune up fight. A winnable fight that poses some risk but should be the desired path. Perhaps someone like Edson Barboza or James Vick would be better options. They both prefer striking so the likelihood of a submission or wrestling battle would be minimized which would let “The Notorious” showcase his stand-up skills. With an emphatic win, the general public would be ready to buy into the untouchable aura that surrounded him on the way to stardom but has diminished greatly since last Saturday.

While he is easily one of the best fighters alive right now, the fact of the matter that he’s 2-2 in his last four outings, including his professional boxing debut. Another loss right now, especially in a rematch with Khabib Nurmagomedov, would do irreparable harm to his brand. Going the safe route would allow McGregor to get his bearings back, allow for big paydays all around and secure bigger paydays in the eventual rematches with Nurmagomedov and Diaz, while opening up the door for more big paydays with fresh elite match ups.

Shincheckin asks: Why are MMA and WWE becoming so similar?

Sorry to break it to you Shincheckin, but they’ve never been that different. Of course we can trace some of the roots of what we now know as mixed martial arts to catch wrestling. But beyond that, the similarities are glaringly obvious.

Professional wrestling highlights over-the-top personalities, drama and storylines that culminate in grueling displays of physicality surrounded by pageantry and showmanship. Sound familiar? The purest of MMA fans may not like the comparison, but it doesn’t stop it from being true.

We are constantly attracted to the biggest personalities -- no need to remind you of the subjects from the previous two questions. When you hear The Rock or Million Dollar Man on the mic, you can’t hear the similarities between all of our favorite MMA stars past and present? The fact of the matter is that those things that drive the purist MMA fans away from WWE are the things that drive them toward their favorite fighters. If that wasn’t the case, Raphael Assuncao would’ve had a title shot by now and Curtis Blaydes wouldn’t be getting passed over for Derrick Lewis and Brock Lesnar.

The outcome of professional wrestling is scripted and MMA is not. Other than that, the products are very similar and are more rooted in the entertainment aspect than sporting competition. But don’t take it from me. I’m a newly converted mark for New Japan and PWG.