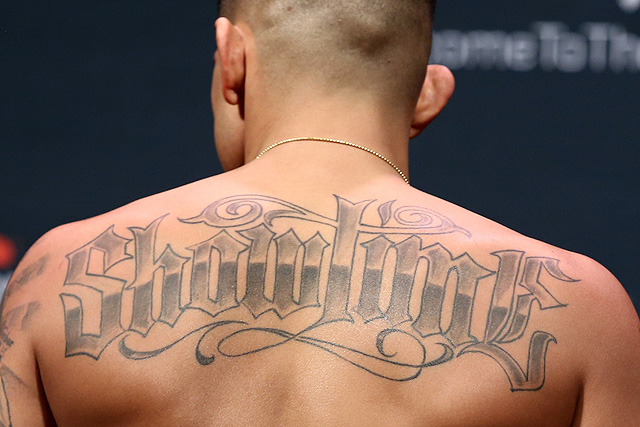 
Rafael dos Anjos may have been a +380 underdog in challenging Anthony Pettis (-475) for the Ultimate Fighting Championship lightweight belt, but it was “Showtime” who looked outclassed in the UFC 185 main event on Saturday at the American Airlines Center in Dallas.

Utilizing heavy pressure, dos Anjos won each of the five rounds on all three judges’ scorecards. Pettis struggled under the weight of the Brazilian’s relentless forward movement and had no answer for his numerous takedowns and damaging left hands. Dos Anjos targeted the Duke Roufus protégé’s right eye, and the subsequent loss of vision certainly did not aid the Milwaukee native’s cause.

The victory, dos Anjos’ fourth in a row, put an end to a five-fight winning streak for Pettis and gave the UFC its seventh champion at 155 pounds.

Meanwhile, Carla Esparza may have worked her way through Season 20 of “The Ultimate Fighter” as the No. 1 seed, but she was no match for Joanna Jedrzejczyk in the UFC 185 co-headliner. A slight underdog (+125) on paper, according to BetDSI.com, the Polish kickboxer put on a striking clinic and exposed the holes in Esparza’s game. Esparza, a -145 favorite, enjoyed little success with her takedowns. Jedrzejczyk was merciless with elbows, knees and punches, as she easily won the first round and continued to batter her exhausted opponent in the second, ultimately capturing the women’s strawweight title via knockout with 43 seconds left in round two.

With that, the undefeated Jedrzejczyk joined Bas Rutten and Andrei Arlovski as the only European champions in UFC history.

The night also did not go according to plan for Pettis’ younger brother. Sergio Pettis (-555) stepped into the cage as an enormous favorite against Ryan Benoit, and the reasons seemed clear throughout a one-sided first round. There, Pettis utilized jabs, hard body kicks and deft footwork. “The Phenom” followed the same game plan in round two, but Benoit resisted: He stopped a takedown, floored Pettis with a left hook and finished him with ground-and-pound. The match was halted 94 seconds into the second round, with Benoit adding insult to injury by kicking the fallen Pettis in the rear end after the stoppage had already been called.

Finally, Larissa Pacheco (-125) entered her undercard matchup against Germaine de Randamie (+105) as a narrow favorite. Pacheco, a former Jungle Fight champion and the youngest fighter on the UFC roster, had compiled a 10-1 record, whereas de Randamie was just 4-3; and both women’s bantamweights had lost their Octagon debuts, Pacheco to Jessica Andrade and de Randamie to Amanda Nunes. Looks, however, can be deceiving. The 20-year-old Pacheco’s record and the fight odds did not account for de Randamie’s 37-0 mark as a kickboxer. She imposed her will on the Brazilian prospect, teeing off with a barrage of uppercuts, right hooks and elbows. Pacheco found herself at the mercy of de Randamie’s superior standup skills, leading to a technical knockout for “The Iron Lady” 2:02 into the second round.