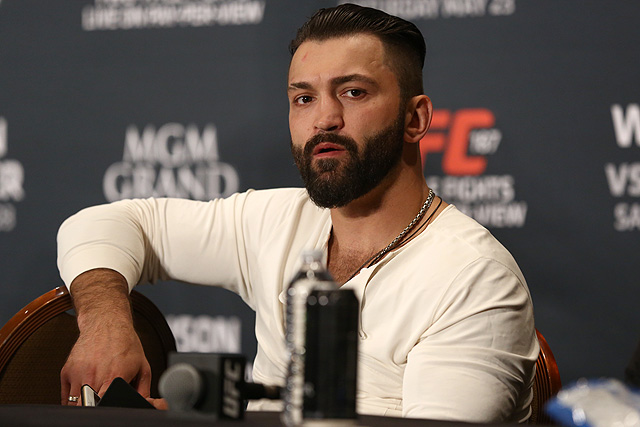 Andrei Arlovski will carry a five-fight winning streak into his next outing. | Photo: Dave Mandel/Sherdog.com


Andrei Arlovski made the bookmakers eat their odds.

The former Ultimate Fighting Championship heavyweight titleholder recorded his fifth consecutive win, as he stopped Travis Browne with first-round punches at UFC 187 “Johnson vs. Cormier” on Saturday at the MGM Grand Garden Arena in Las Vegas. Browne, a -500 favorite, met his end 4:41 into round one.

Arlovski, who entered the cage as a +400 underdog, is a perfect 3-0 since returning to the UFC in June, with victories over Browne, Antonio Silva and Brendan Schaub.

“One step at a time,” the Belarusian said at the post-fight press conference. “Somebody is going to call me tomorrow from the UFC about my next fight, and it’s going to be my next opponent.”

Arlovski finished it inside one round despite a calf injury that nearly forced him to withdraw from the match. The 36-year-old Jackson-Wink MMA representative had Browne reeling throughout their brief encounter, ultimately finishing him with a devastating uppercut and subsequent straight right. Browne had his moments -- he dropped Arlovski with a counter right hook -- but “The Pit Bull” would not be denied. Both heavyweights earned $50,000 “Fight of the Night” bonuses for their performances in what has become an early frontrunner for “Round of the Year.”

No matter what comes next for the resurgent Arlovski, he has once again established himself as one of the world’s best heavyweights.

“Of course, in the future, I want to be UFC champion, but sooner or later, it doesn’t matter,” he said. “I can be in line, so I’m good. I still have a few more years in the UFC. It’s totally up to the UFC. I can wait. I can fight forever.”

Meanwhile, it might not have been the flashiest upset, but Rafael Natal (+325) squeaked by with a razor-thin decision over heavily favored two-time Ring of Combat champion Uriah Hall (-400) in a preliminary bout at 185 pounds. Unlike their contentious weigh-in the day before, the actual fight between the two middle-tier middleweights was not much to write home about. Natal’s takedowns and clinch work, combined with Hall’s inactivity, led two judges score the match 29-28 in the Brazilian’s favor.

Afterward, Natal claimed to be unsure about where the hostilities between the two originated.

“I’m not really sure what happened in the last couple days that led to the animosity,” he said during a post-fight media scrum. “Uriah grew up in New York, I live in New York and I guess it turned into a competition of who would better represent New York. He was trying to prove that he was better. I don’t like that type of stuff, but this is fighting and it happens sometimes even though it’s really not my thing. I’d rather do my talking in the Octagon.”