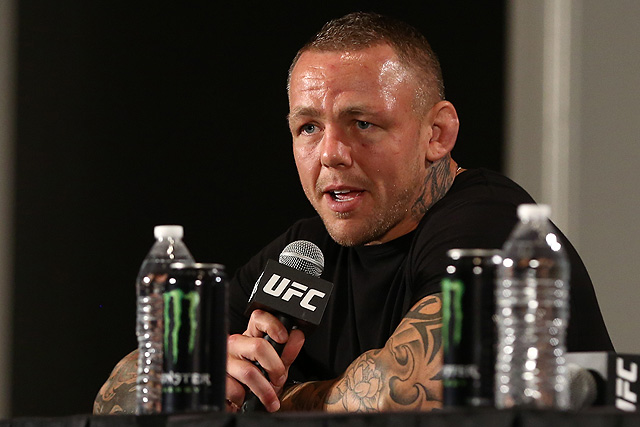 
Oddsmakers and analysts alike predicted that “The Ultimate Fighter” Season 9 winner Ross Pearson would be no match for the speed and knockout power of former Cage Fury Fighting Championships titleholder Paul Felder at UFC 191 “Johnson vs. Dodson 2” on Saturday at the MGM Grand Garden Arena in Las Vegas.

Pearson -- a +345 underdog, according to BetDSI.com -- had other ideas and reminded everyone that he has some striking skills of his own. The Alliance MMA representative countered effectively and punched well in combination, as he captured a split decision over Felder (-435) on the undercard.

While he did not take the route he envisioned, former World Extreme Cagefighting champion Joe Riggs (+195) was awarded his first Ultimate Fighting Championship victory since 2006 when Ron Stallings (-230) was disqualified for an illegal upkick. The end came 2:28 into round two.

Stepping in as a late replacement for the injured Liz Carmouche, Jessica Andrade (-170) was nevertheless considered the favorite entering her preliminary women’s bantamweight rematch with Raquel Pennington (+145). The Brazilian had already beaten Pennington at UFC 171 in March 2014. However, all did not go according to plan for Andrade. Pennington demonstrated her improved submission skills, snatching a rear-naked choke tapout with just two seconds remaining in the second round.

Tiago dos Santos e Silva (+145) was a late fill-in for injured Team Alpha Male standout Andre Fili, and many assumed that Clay Collard’s durability and striking ability would net him a knockout or a decision. However, Collard (-146) did not exactly keep his chin tucked or his hands up, and “Trator” enjoyed enough of an advantage on the ground to walk away with a split decision.

Finally, two-time Brazilian jiu-jitsu world champion Nazareno Malegarie (-126) was thought to have an inside track on a submission against the unbeaten but unproven Joaquim Silva (+106). Unfortunately for the Argentinian grappler, Silva was the superior striker and carried two of the three judges’ scorecards. Malegarie managed to execute a few takedowns but never attempted a submission.