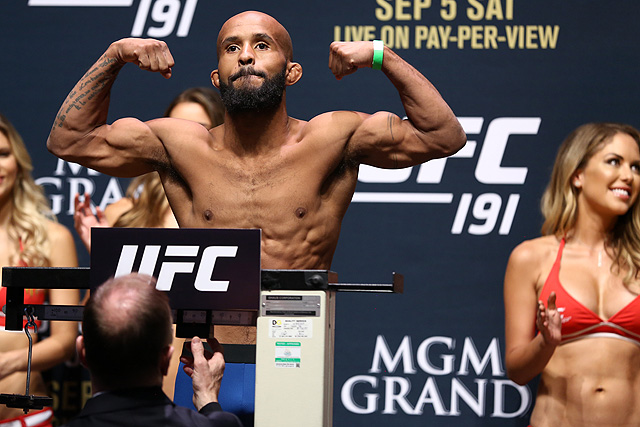 Demetrious Johnson has yet to connect with the buying public. | Photo: Dave Mandel/Sherdog.com


Demetrious Johnson once again proved why he is one of the best -- if not the best -- pound-for-pound fighters in mixed martial arts with a thorough domination of John Dodson at UFC 191 on Sept. 5. Once again, however, fans -- and by all accounts the PPV-buying public -- showed their appreciation, or lack thereof, for the flyweight champion by jeering and leaving the MGM Grand Garden Arena in Las Vegas before “Mighty Mouse” had his hand raised and the 125-pound title wrapped around his waist.

The Ultimate Fighting Championship has a bizarre dilemma with Johnson. He is closing in on the all-time record for most consecutive title defenses with seven -- Anderson Silva has 10 -- and has been virtually untouchable in the flyweight division, generating one flawless performance after another. However, not enough people seem to care. It is a certainty that the pay-per-view sales for UFC 191 will pale in comparison to the string of recent cards that were headlined by Ronda Rousey (UFC 190), Conor McGregor (UFC 189), Fabricio Werdum (UFC 188) and Daniel Cormier (UFC 187). Judging by the estimates of reputable outlets like The Wrestling Observer, Johnson has been a death knell whenever he headlines a PPV event. It is a sad truth that continues to baffle those who appreciate his mastery inside the Octagon.

The lack of appreciation has drawn the ire of UFC President Dana White, who called those who booed in the arena “a bunch of drunk dummies.” It seems as if White and commentators Joe Rogan and Mike Goldberg have gone out of their way to praise Johnson as perhaps the best pound-for-pound fighter in mixed martial arts. Those ringing endorsements continue to fall on deaf ears.

No, Johnson is not finishing foes in the time it takes someone to shoot an Instagram video, but he has been just as dominant as the other championship in the UFC. To be honest, he is more like Floyd Mayweather Jr. than any other mixed martial artist, with his ability to avoid punishment while using his natural gifts to outclass opponents. Yet Mayweather is a massive box-office draw. Why can’t Johnson sniff some significance on the PPV scale?

Before, it seemed like his personality was holding him back. Nobody asked “Mighty Mouse” to go full Mayweather, but he simply was not clicking with fans. Lately, however, Johnson has been a bit more vocal and ripped the self-imposed filter from his mouth.

“I look prettier than a mother [expletive],” Johnson boasted after he beat Dodson. That made a lot of MMA journalists grin from ear to ear during the post-fight press conference. He even showcased some similarities between himself and the highest-paid athlete in the world. “I can go home and my kids will see me and they’ll say, ‘Daddy, what happened?’ And I’ll say, ‘Nothing, son. I got paid, and that’s it,’” Johnson bragged. When asked about being involved in slugfests, his response sounded just like something Mayweather would say: “I’m not risking my brain cells and trauma to my head for fights like that.”

Even with an attitude adjustment, Johnson just cannot seem to bring in the fans. So what is the UFC supposed to do when one of its best fighters struggles to put butts in seats and force fight fans at home to buy a pay-per-view he headlines?

Could it be his personality? Maybe, but Johnson has been pretty outspoken of late and is certainly more entertaining in his interviews than, say, UFC lightweight champion Rafael dos Anjos. What we do not want to see is “Mighty Mouse” go the Mayweather route and become a complete villain just so fight fans pay to possibly see him lose. He has far more integrity than that, and the mere concept unsteadily walks the fine line that suggests African-American fighters can only draw if they are perceived as bad guys.

Could it be the lack of competition? Perhaps, but Dodson was a formidable opponent who did his best to push the promotion by insulting the champion in every interview. Considering that Dodson had been the only flyweight challenger to give Johnson some trouble when they met the first time in 2013, there was enough of a storyline to generate interest. Still, the rematch had a lukewarm reception from the day it was announced all the way until Johnson retained his title. However, with Dodson ousted, the challenge with which the UFC has been presented is building a foil that has his own fan base and is viewed as someone who can finally stop Johnson’s torrid run through the division.

Could that man be Henry Cejudo? In order for it to be youngest American wrestler to ever take home an Olympic gold medal, the UFC’s public-relations machine is going to have to go into hyperdrive and find creative ways to promote Cejudo as more than just a fighter. That needs to start sooner than later, as Cejudo possesses a great personality and is perceived to have the tools that could give Johnson some problems. With Cejudo’s fight against Jussier da Silva coming in November, it would be in the UFC’s best interest to get this going.

Another option would be a perceived “super fight” with UFC bantamweight champion T.J. Dillashaw, although he has a date with former titleholder Dominick Cruz on Jan. 17. A fight between Johnson and the winner -- Cruz, after all, was the last man to defeat him -- would make sense. However, it would not be a guaranteed draw.

Ultimately, something has to be done to promote Johnson to a wider audience. His talent should be appreciated, and it is downright embarrassing to true mixed martial arts fans when he gets jeered for being better than everyone else in his division. In all honesty, the issue is a combination of personality, opponents and the UFC finding creative ways to push “Mighty Mouse” into the mainstream, and it needs to be addressed. He is simply too good to be ignored.