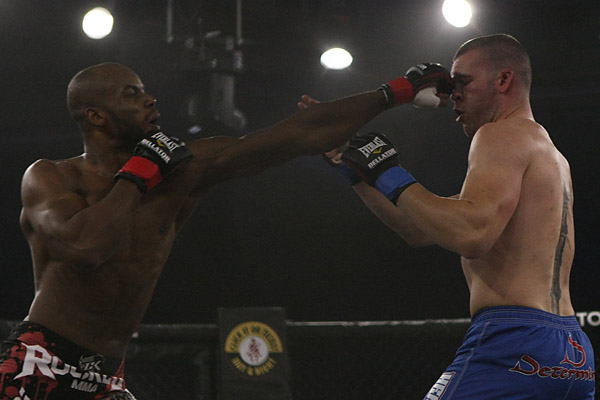 Bellator Fighting Championships 205-pound titleholder Christian M'Pumbu has yet to defend the belt he won more than a year ago. That figures to change soon with the dawn of the Bellator Summer Series light heavyweight tournament.

Eight men will vie for the right to challenge M’Pumbu for promotional gold when the tournament kicks off with its quarterfinal round at Bellator 71 on Friday at the Mountaineer Casino Resort in Chester, W.Va. The event will air on MTV2 at 8 p.m. ET/7 p.m. CT, with the light heavyweight draw as its centerpiece: Attila Vegh-Zelg Galesic, Travis Wiuff-Chris Davis, Richard Hale-Beau Tribolet and Emanuel Newton-Roy Boughton.

Three of the tournament entrants -- Davis, Hale and Wiuff -- have unfinished business with M’Pumbu. Wiuff defeated the champion by unanimous decision in a non-title affair at Bellator 55 in October. The 80-fight journeyman has posted an 11-1 mark in his past 12 outings. Meanwhile, Hale lost to M’Pumbu by third-round technical knockout in the Season 4 tournament final and undoubtedly wants a chance to exact some revenge. Davis met a similar fate, as the African-born Frenchman wiped him out with third-round punches in the quarterfinals.

Outside of the latest light heavyweight competition, the show carries with it a number of other intriguing storylines. Here is what to watch for at Bellator 71:


On June 6, 2009, Strikeforce veteran Brett Rogers smashed through former UFC champion Andrei Arlovski in 22 seconds and looked the part of a semi-serious heavyweight. He was 10-0 with 10 finishes, eight of them inside one round. His only win since came against subpar journeyman Ruben “Warpath” Villareal. Talk about a fall from grace.

Photo: Dave Mandel
Brett Rogers has a fresh start.
Rogers’ issues have not been confined to the cage. He was twice arrested in 2011, first on domestic violence charges and later for violating pre-sentencing terms related to his guilty plea. The hulking Minnesotan served time in jail in the fall, the incidents resulting in his Zuffa LLC release and likely costing him a crack at an eventual stint in the Ultimate Fighting Championship.

In search of his first win in nearly two years, the 31-year-old Rogers will try to get his professional career back on track in his Bellator debut against Kevin Asplund, a former friend and training partner. The bout brings with it a bizarre set of circumstances, as Rogers believes Asplund’s wife may have been behind a recent fire at his residence. The incident has added another dimension to their fight.

Asplund will carry a 15-fight winning streak into the cage. The Ambition Training Academy representative last appeared under the Brutaal Fight Night banner in July, when he captured a split decision against Reese Hernandez in a five-round title fight. Asplund sports 11 finishes among his 15 career victories, six by submission and five more by knockout or technical knockout.


E.J. Brooks has made himself a person of interest at 155 pounds with a perfect 4-0 record in Bellator.

Brooks wields the kind of wrestling credentials one looks for in a mixed martial arts prospect: a junior college national championship followed by three years at the University of Missouri. The 26-year-old will confront fellow unbeaten Joey Bernard Holt in a preliminary matchup, perhaps with a spot in Bellator’s next lightweight tournament hanging in the balance.

A Cahokia, Ill., native, Brooks was wise to join forces with Strikeforce welterweight contender and fellow Missouri alum Tyron Woodley, and the alliance appears to have paid dividends. He has won all seven of his fights since turning pro two years ago, including a unanimous decision over Kalvin Hackney at Bellator 69 in May.

After a rather non-descript amateur career, Holt has put away his first three opponents as a professional, two of them in less than 90 seconds. He made his promotional debut at Bellator 51 in September, scoring a spectacular knockout on Clint Musser via flying knee. Holt would like nothing more than to take a bite out of Brooks’ momentum.

Carpenter bounced back nicely from his first career defeat -- a technical knockout to the aforementioned M’Pumbu in the Bellator Season 4 light heavyweight tournament semifinals -- with a first-round finish on Ryan Contaldi at Bellator 54 in October. In his first appearance since, the 31-year-old Brazilian jiu-jitsu black belt will butt heads with Strong Style Fight Team member John Hawk.

Hawk made substantial noise in April, when he took a split verdict from Marcus Vanttinen, a 24-year-old Finnish import who had lost just once in his previous 13 appearances. Consistency, however, has been an issue. Hawk has not won consecutive bouts in more than two years, leaving the door open for Carpenter to reclaim even more of the steam he lost to M’Pumbu.
SHARE ON FACEBOOK SHARE ON TWITTER
Related Articles
Latest News
+ VIEW MORE