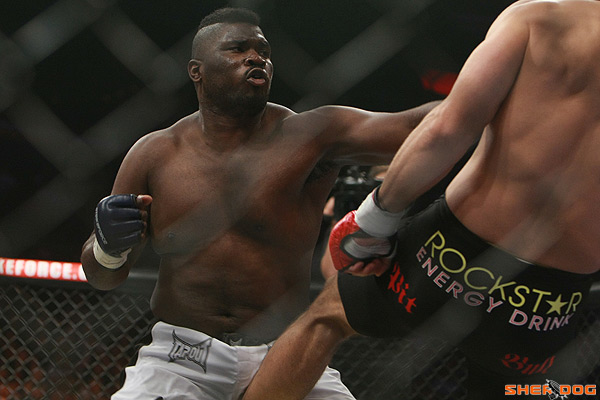 Brett Rogers has a chance to turn around his career. | Photo: Sherdog.com


After kicking off its seventh season with the welterweight tournament quarterfinals, Bellator Fighting Championships will now thrust the heavyweights front and center on Friday at Bellator 75.

What takes place at the Venue at Horseshoe Casino in Hammond, Ind., will undoubtedly have a great effect on the future of the promotion’s heaviest division -- a category now left without an alpha dog following the unexpected retirement of titleholder Cole Konrad in September. A two-time NCAA wrestling champion, the unbeaten 28-year-old Konrad won all seven of his fights within the promotion.

Here is what to watch for at Bellator 75, which will be broadcast on MTV2 and streamed live on Bellator.com and Spike.com.


Is Brett Rogers the odds-on favorite to become Bellator’s next heavyweight champion? If so, “Da Grim” will have completed a seriously quick career turnaround.

In November, Rogers was sentenced to 60 days in jail after pleading guilty to a felony count of third-degree assault. The charge was filed after Rogers allegedly struck and strangled his wife during a June 30 domestic incident that occurred less than two weeks after he was dominated by ex-UFC heavyweight champion Josh Barnett in the Strikeforce heavyweight grand prix quarterfinals.

Following his arrest, Rogers received his Strikeforce release and was subsequently outpointed by UFC castoff Eddie Sanchez. Rogers looked significantly better in his Bellator debut in June, but, then again, Kevin Asplund is not exactly the golden standard of heavyweight excellence.

Too Big of a Monster


Thiago Santos must win his battle of the bulge in order to fulfill his considerable potential as a Bellator heavyweight.

A veteran of defunct bare-knuckle Brazilian promotion Rio Heroes, “Big Monster” holds big power in both hands, as displayed in his first-round finishes of Josh Burns and Neil Grove last fall. Unfortunately, those impressive Season 5 performances proved to be exercises in futility after Santos drilled Eric Prindle with an illegal groin strike in their heavyweight tournament final and then failed to make the 265-pound limit for their scheduled rematch in March.

There are a few things the 25-year-old needs to work on. First, please do not toe punt your opponents in the groin anymore. Trust me, this will work out better for everyone. Second, make weight. If Santos can oblige those two requests, fans might be looking at Konrad’s heir and the next Bellator heavyweight champion.


If I were Prindle, I would be just a teensy bit eager to settle the score with Santos.

Forget the big fella missing weight in March. While unprofessional, that is not necessarily the end of the world. Plus, Santos -- a relative novice at cutting weight -- had to trim down two weeks in a row due to Prindle’s flu-like symptoms postponing the rematch. Add to this the horror story I heard regarding some mystery hotel patron throwing a pile of eucalyptus in the sauna that made everybody sick while Santos was trying to sweat off those extra pounds, and the situation seems significantly more sympathetic.

No, I am talking about that horrible, unforgivable shot to the pills during their first fight. That would be the action worth avenging for Prindle, though in this particular instance I would not recommend fighting fire with fire.

What Prindle needs to do is shake off the memory of his May submission defeat to Konrad and enter the cage with a clear mind and a mean streak. The American must keep his chin tucked to avoid the wild, powerful hooks of Santos while at the same time keeping his right hand cocked and ready to fire. Prindle owns the power to put away anybody if he connects cleanly, and a knockout over Santos would undoubtedly send a clear statement to the rest of the tournament field.


What the heck is Richard Hale doing in this heavyweight tournament?

I guarantee that is a question that more than one astute observer asked upon learning that the Season 4 light heavyweight tournament finalist would actually be moving up in weight after getting his ticket punched by the much smaller Christian M'Pumbu.

In Hale’s defense, he did begin his career as a heavyweight, and, at 6-foot-4, he certainly owns the frame to carry the extra poundage. Additionally, he has put his considerable punching power on full display in each of his last two outings, most recently wrecking a slimmed-down Burns at Bellator 69 in May.

In the heavyweight quarterfinals, Hale should almost certainly be giving up some weight to thick bruiser Mike Wessel. If the Arizonan can use his reach and speed advantage effectively, he might prove to be an entertaining dark horse in this upcoming heavyweight horserace.