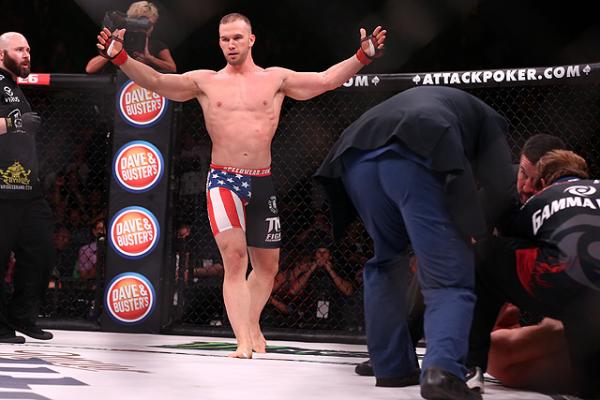 
Bellator MMA’s middleweight throne currently sits empty, but Brandon Halsey does not see it that way. Despite the fact that he will fight for a championship that was stripped from him -- he missed weight for his scheduled title defense against “The Ultimate Fighter” Season 3 winner Kendall Grove -- prior to his most recent bout, Halsey still considers himself the top 185-pound fighter competing under the Bellator banner.

Halsey will take on Rafael Carvalho for the vacant middleweight title in the Bellator 144 main event on Friday at the Mohegan Sun Arena in Uncasville, Conn. Spike TV will air the five-round headliner atop a main card that begins at 9 p.m. ET/8 p.m. CT. Joining the Halsey-Carvalho title fight on the marquee is a welterweight clash matching Brennan Ward with Dennis Olson, a featherweight tilt pitting Goiti Yamauchi against Isao Kobayashi and a welterweight attraction matching the unbeaten Michael Page with Charlie Ontiveros.

The 29-year-old Halsey owns a perfect 9-0 record and captured the Bellator middleweight championship in September 2014 with a 35-second submission on Alexander Shlemenko. However, he failed to make weight for his matchup with Grove at Bellator 137 in May and was subsequently stripped of the title. Halsey knocked out Grove in the fourth round of their non-title affair. Operating out of the HB Ultimate camp in California, the “Bull” admits he was disappointed to have the championship taken away from him but vowed to be prepared to come back and make a statement against Carvalho.

“
To me, you have to do more
than miss weight to lose a
championship. You have to have
someone beat you to really
lose a championship.

“I could blame missing weight on a bunch of stuff, but those would just be excuses and I’m not going to do that,” said Halsey, who sports six finishes among his nine career victories. “I could say that I got sick or I was hurt or that I had a rough camp and those played a role in me missing weight. It is what it is. It was rough to miss weight and that’s not something I normally do, but I’ve dealt with it and just have to rebound.”

Though he has been fighting professionally for less than four years, Halsey already holds notable wins over Shlemenko, Grove, Hector Ramirez and Brett Cooper. However, he understands that he remains a work in progress and believes his development has moved forward while training for Carvalho.

“Camp has gone well for me,” said Halsey, a state wrestling champion in high school who went on to earn All-America honors at Cal State Bakersfield. “I’m continuing to get better every day and improve in every fight. I haven’t been fighting long, so I just keep improving in every aspect of my game.”

Halsey was far less experienced than his last two opponents -- Grove and Shlemenko have nearly 100 fights between them. In Carvalho, he will find a dance partner with a similar amount of seasoning. The Brazilian will enter the cage on an 11-fight winning streak, having suffered his lone setback in his December 2011 pro debut.

Carvalho has delivered nine of his 11 victories by knockout or technical knockout. He broke into Bellator with a first-round KO on Brian Rogers in September 2014 and followed it with a split decision against Joe Schilling at Bellator 136 in April. Against Schilling, Carvalho elected not to stand with the decorated kickboxer and instead utilized the clinch, took down the American and controlled him for much of the fight. He did weather a heavy right hand from Schilling in the third round but scored a late takedown to nail down the victory.

Halsey respects the Carvalho’s talents but sounds confident that he can withstand whatever the Brazilian might throw at him, either on the feet or on the ground.

“I’m not looking past him, that’s for sure,” he said, “but I don’t get too much into the scouting part of things. I rely on my coaches for coming up with the game plan. I just work on improving myself and making myself the best fighter I can be. I know both of us are strong finishers but I’m still training like it’s going to go five full rounds, and I’m going to be aggressive and set the pace in this fight.”