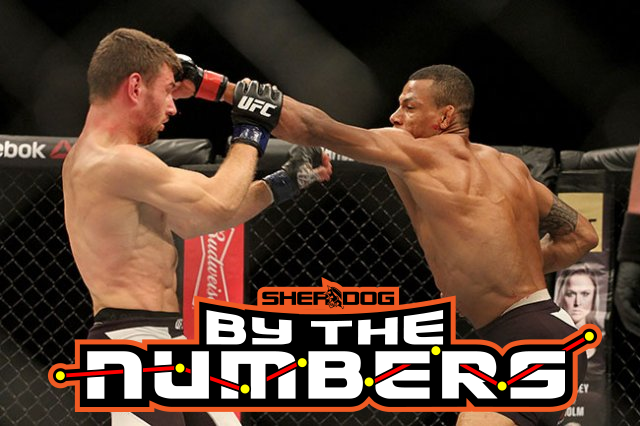 Alex Oliveira came back from a loss to Yancy Medeiros by scoring the biggest win of his career against former interim Ultimate Fighting Championship welterweight king Carlos Condit. On a mission to get back inside the Top 10, Oliveira will fight tooth and nail to get past young prospect Carlo Pedersoli Jr. as they co-headline UFC Fight Night 137. Ahead of their thrilling matchup, here are some of the numbers that have come to define the native of Rio de Janeiro.

4: Victories to start his professional career. He went 4-0 before falling victim to Wendell Oliveira at an event called Watch Out Combat Show 25. It also marked the first time he went the distance after finishing his first four fights.

7: More wins before getting signed by the UFC. After losing to Oliveira, he piled up seven victories and was given a tough assignment in fellow Brazilian, Gilbert Burns, in his promotional debut. Oliveira lost by armbar in round 3.

1: Round to defeat Strikeforce veteran and former EliteXC lightweight champion K.J. Noons, whom he submitted in 2:51 in their UFC Fight Night 67 encounter. He followed it up with triumphs over Joe Merritt and Piotr Hallmann.

14: Significant strikes against Donald Cerrone’s 4 at UFC Fight Night 83, according to Fightmetric. Oliveira was slowly gaining a little momentum with his striking until Cerrone took him down and managed to sneak in a triangle choke.

2: UFC fights where he completely overwhelmed his opponents with strikes. According to Fightmetric, Oliveira battered James Moontasri at UFC on Fox 20, 58-12. Then at UFC Fight Night 96, he did the same to former Bellator MMA lightweight champion Will Brooks, only this time, he finished the fight via TKO in round 3.

333: Total strikes in the Octagon, per Fightmetric. Oliveira has certainly made good use of his muay Thai training so far in his UFC tenure.

5: Submission wins. Oliveira is just as effective on the ground, having tapped out Welton Doidao, Ederson Moreira, Noons, Tim Means and Condit.

2: Fights with Means. Their first encounter was ruled a no contest after the American landed several knees to a downed Oliveira. The Brazilian made sure to finish the fight in their rematch with a second-round rear-naked choke.

1: Time he missed weight. Oliveira badly missed the mark and Brooks’ camp accused him of doing it on purpose to gain an advantage. As a result, the Brazilian was fined 20 percent of his purse and was ineligible for bonuses.

2: Rounds to submit Condit. Just when “The Natural Born Killer” was showing old form, Oliveira made him tap out to a guillotine choke at the 3:17 mark.