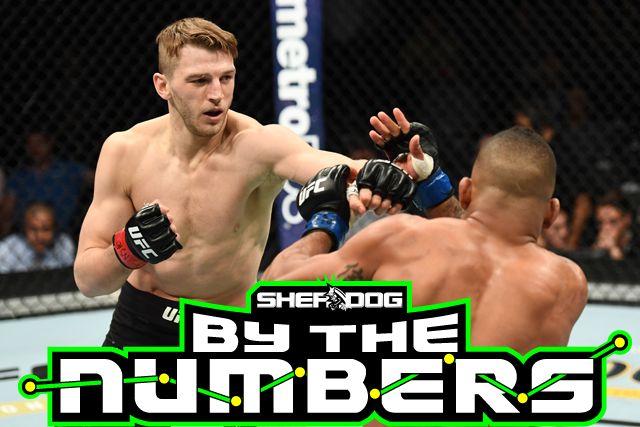 Dan Hooker is currently on a four-fight winning streak and more than ready to take on anyone in the top 10. On the strength of his recent strong showings, which include stoppages of Gilbert Burns and Jim Miller, “The Hangman” is given a top-caliber opponent in Edson Barboza.

It was actually a wish granted as Hooker has long been eyeing the world-class Brazilian striker -- a big fish to catch for the 14th-ranked lightweight. Will he make it five straight? As fans await for this thrilling match in Milwaukee at UFC on Fox 31, here are some figures that have made Hooker one of the dark horses at 155.

9: Wins and one loss as a professional kickboxer. Hooker held two titles, the King in the Ring middleweight kickboxing championship and the WKBF X-Rules welterweight crown.

2: MMA titles from regional promotions. Hooker captured the Supremacy Fighting Championship’s South Pacific lightweight belt by choking out Scott MacGregor in July 2011. Then in April 2012, he defeated Rusty McBride via doctor stoppage to take the Australian Fighting Championship lightweight strap. He successfully defended it in a rematch as well as from Nick Patterson.

3: Countries in which he fought before getting signed by the Ultimate Fighting Championship. Apart from his home country of New Zealand, Hooker also fought in China and neighboring Australia.

1: Round needed to impress UFC fans. For his Octagon debut, Hooker was part of UFC Fight Night 43, where he TKO’d Ian Entwistle with elbows at the 3:34 mark of the first round. in his next fight, however, he was denied by Maximo Blanco, who beat him by unanimous decision.

2: Divisions in which he fought in. He played around lightweight and featherweight throughout his career, but has settled at 155 since his bout with Ross Pearson at UFC Fight Night 110.

9: Wins by KO or TKO. He has been making good use of his rich kickboxing background, knocking out one opponent after another.

7: Wins by submission. Hooker has proven that you don’t have to be a black belt in Brazilian jiu-jitsu to have an effective ground game for MMA. The blue belt has garnered seven submission stoppages, mostly by rear-naked choke and guillotine.

2: Performance of the Night awards. Hooker has pocketed $100,000 in post-fight bonuses for his stunning knockout of Pearson and Hatsu Hioki.

3: Losses in the UFC. He has been fighting inside the Octagon since 2014, engaging in 10 bouts and winning seven of them. His three defeats came at the hands of Maximo Blanco, Yair Rodriguez and Jason Knight.