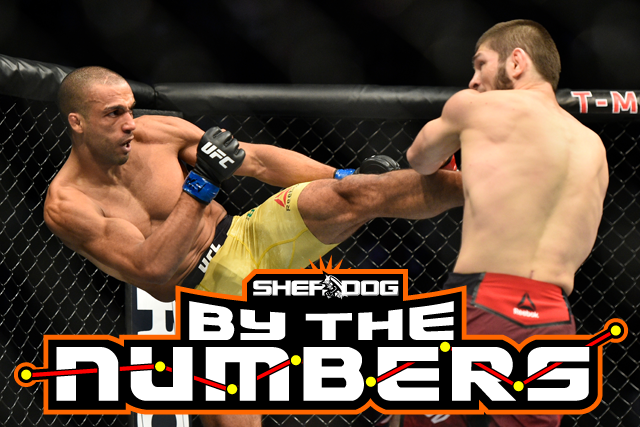 Nevermind that he is coming off the first back-to-back losses of his career; Edson Barboza is a perennial top contender with notable victories over Anthony Pettis and Gilbert Melendez. He has lost only to high-level competition, and would refuse to be a stepping stone for the resurging Dan Hooker, who he is set to face at UFC on Fox 31.

As “Junior” prepares for the bout that could ferry him inside the top 5, take a look at the numbers that have made him one of the most dangerous fighters at 155.

8: Years old when he started training and competing in muay Thai in his native of Rio de Janeiro. Barboza would go on to turn pro, with a record of 25-3. Twenty two of his victories came by knockout, and 17 of which were in the first round.

23: Years old when he moved to the United States to pursue his MMA career, joining The Armory in Jupiter, Florida. A few months later, he made his professional debut at Real Fighting Championships 17 held in Tampa. Barboza won in spectacular fashion; a flying knee followed by a few punches to the ground.

6: Fights in regional promotions before getting signed by the Ultimate Fighting Championship. Barboza won each one of them via stoppage, and just like that, the UFC took notice.

2: Titles held in the regional circuit. Barboza won the Renaissance MMA lightweight championship and successfully defended it against the same person, Lee King. He defended it one more time from Jose Figueroa before moving to Ring of Combat, where he captured the lightweight title from Marcelo Guidici.

6: Fight of the Night awards received, a testament to the level of intensity Barboza brings with him every time he steps inside the Octagon. He has also been awarded Knockout of the Night and Performance of the Night once.

6: Defeats in his career. As mentioned earlier, Barboza has only lost to top-quality opponents, which include Jamie Varner, Donald Cerrone, Michael Johnson, Tony Ferguson, Khabib Nurmagomedov and most recently, Kevin Lee.

7: Finishes in the first round. By the time he reached the UFC, he had already built a solid reputation as a knockout artist, with five first-round stoppages. In the UFC, his victims include Lucas Martins, whom he TKO’d at UFC on FX 7 and Evan Dunham at UFC Fight Night 45.

1: Submission victory in his career. His intention is clear every time he steps inside the cage, and that is to knock his opponent out. But the Brazilian jiu-jitsu brown belt under Ricardo Almeida has one submission win to his name, an anaconda choke of the aforementioned King.

2: Losses by submission. Barboza isn’t the easiest to catch with a submission, as he’s only been tapped out twice in his career, by Cerrone and Ferguson.