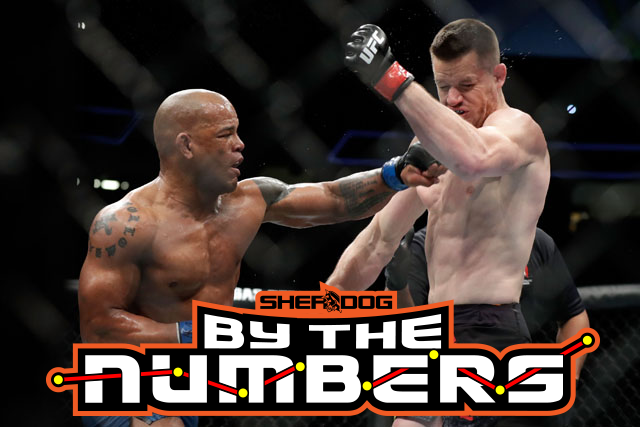 Inconsistency has made Hector Lombard lose much of his luster in the Ultimate Fighting Championship. After going 3-2 with two devastating knockouts, he dropped five straight to Neil Magny, Dan Henderson, Johny Hendricks, Anthony Smith and C.B. Dollaway.

At UFC Fight Night 137, he will have a chance to bring back the lost fire as he faces Thales Leites. They square off at the Geraldo Jose de Almeida Gymnasium in Sao Paulo on Sept. 22, and as fight day nears, here are some of the numbers that have come to define “Lightning” Lombard.

2: Wins in professional kickboxing, both in Melbourne. He did it while also fighting professionally in mixed martial arts.

5: Wins and one no contest to start his professional career. All his victories happened in Brisbane while the no contest was in Gold Coast, Australia. In his third win, he captured the inaugural Xtreme Fighting Championships light heavyweight championship.

6: Seconds to knock out Jay Silva. Lombard made history at Bellator 18 after scoring the fastest KO in the promotion’s history.

8: Fights at Bellator, all victories. He snatched the middleweight strap by winning the Bellator middleweight tournament final over Jared Hess.

1: Successful title defense. He decisioned Alexander Shlemenko at Bellator 34 to keep the title. His next fights for the promotion were a non-title bout with Falaniko Vitale and a catchweight tussle with Trevor Prangley. Then, he was signed by the UFC.

7: Losses in the UFC. Lombard hasn’t been very successful in the UFC, winning only three times: knockouts of Rousimar Palhares and Nate Marquardt, as well as a unanimous decision over Jake Shields.

3: Divisions fought in. He gathered titles in light heavyweight and middleweight and also fought at welterweight.

17: Wins by KO or TKO. Lombard left a trail of destruction in every division he fought in. Notable opponents he knocked out include Marquardt and Palhares as well as Kalib Starnes, Hess and Virgil Lozano.