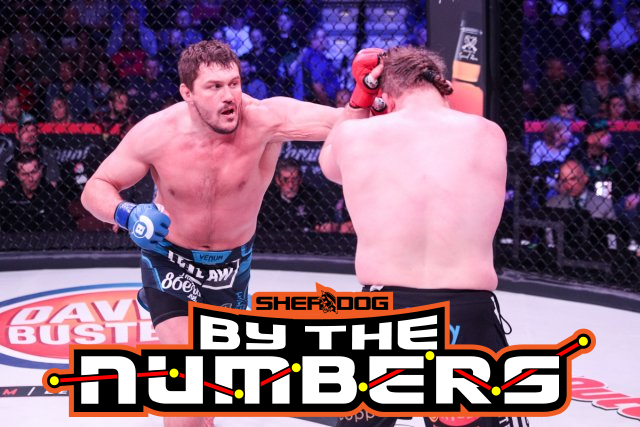 With four wins in as many fights, including conquests of Fedor Emelianenko and Roy Nelson, Matt Mitrione’s career is peaking in Bellator MMA. Rest assured that he wants nothing less than a victory over Ryan Bader to advance to the finals of the promotion’s heavyweight grand prix.

Before they engage in a heated tussle at Bellator 207 this weekend in Uncasville, Connecticut, here is a by-the-numbers look at the former NFL player.

1: Fighter defeated at “The Ultimate Fighter: Heavyweights.” Mitrione was picked second to the last by Rashad Evans. In his first match, he defeated Scott Junk by majority decision but was stopped by teammate James McSweeney in his second bout.

20: Seconds in the second round to knock out fellow former NFL player Marcus Jones. It happened at Mitrione’s official Octagon debut at the TUF: Heavyweights finale. He caught a surging Jones with a counter right and dropped him unconscious, prompting referee Steve Mazzagatti to stop the fight.

5: Wins to start his professional career. After the win over Jones, he earned successive victories over Kevin Ferguson, Joey Beltran, Tim Hague and Christian Morecraft. With the exception of Beltran, all were starched in the first or second round.

3: Full rounds with Cheick Kongo, who dealt him his first defeat in the co-main event of UFC 137. The loss proved that Mitrione was not yet ready for the top of the division at the time being.

2: Back-to-back losses in his career. Mitrione’s loss to Kongo was followed by a defeat to Roy Nelson at the TUF 16 finale. Mitrione would later avenge this setback in Bellator. His other back-to-back losses were to Ben Rothwell and Travis Browne.

19: Seconds to starch Philip De Fries in one of the fastest finishes in the history of the heavyweight division. The bout was part of the UFC Sweden 2 card.

41: Seconds to flatten out Derrick Lewis at UFC Fight Night 50.

7: Wins in the first round. His victims include Hague, De Fries, Lewis, Shawn Jordan, Gabriel Gonzaga, Carl Seumanutafa and Emelianenko.

2: Losses by knockout. Mitrione was given a dose of his own medicine by Nelson and Browne.

1: Fight of the Night award. Mitrione and Beltran stood toe-to-toe in their UFC 119 encounter to earn for themselves $50,000 each in bonus money.

2: Performance of the Night awards. His stunning first-round KOs of Jordan and Gonzaga were shoo-ins for the coveted honors.

2: Promotions fought in. Mitrione has only fought for two organizations in his entire career, the UFC where he went 9-5 and Bellator where he is 4-0 so far.