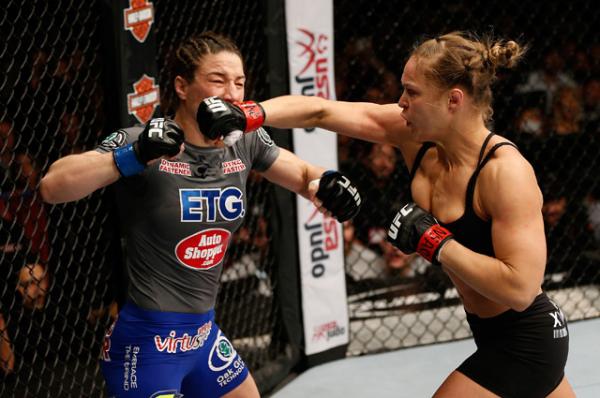 
The champ was obviously in a hurry to get back to Hollywood.

Ronda Rousey wasted little time dispatching her fellow Olympic medalist in the UFC 170 headliner on Saturday night, as she dropped Sara McMann with a knee to the liver to capture her ninth professional victory at the Mandalay Bay Events Center in Las Vegas. The highly-anticipated wrestling vs. judo matchup never really had a chance to unfold as Rousey secured her first victory without the use of her most trusted weapon: the armbar. The next task will be finding a worthy challenger for what seems to be an ever-improving titlist.

Daniel Cormier made similarly short work of last-minute replacement foe Patrick Cummins in the evening’s co-headliner. In his first bout at light heavyweight, Cormier overwhelmed his opponent with a brutal series of punches -- including a pair of uppercuts -- to finish the bout in just 79 seconds. All told, the night’s two featured bouts lasted a grand total of 2:25. Still there are plenty of pertinent facts and figures to examine. Here is a by-the-numbers look at UFC 170, with statistics courtesy of FightMetric.com.

1:06: Time Rousey needed to stop McMann, the fastest KO/TKO to date in the UFC women’s bantamweight division. “Rowdy” dropped McMann with a knee to the body then needed just one follow-up strike before Herb Dean called a halt to the title bout. It was the first time in Rousey’s career that she did not win via armbar.

56: Days since Rousey’s last title defense, a third-round submission of Miesha Tate at UFC 168 in December, tying it for the shortest length of time between UFC title defenses in promotion history. “Rowdy” also had a 56-day layoff between a 49-second armbar win over Charmaine Tweet at Hard Knocks Fighting Championship “School of Hard Knocks 12” on Jun 17, 2011, and her Strikeforce debut, a 25-second submission of Sarah D'Alelio on Aug. 12, 2011.

2: Knockouts stemming from a body shot in a UFC title fight. Rousey became the second -- Georges St. Pierre was the first -- to accomplish the feat by dropping McMann with a knee to the body.

24:32: Total cage time for Rousey during her nine-fight professional career. The Olympic judoka’s longest bout came on Dec. 28, when she needed a grand total of 10:58 to tap Miesha Tate at UFC 168.

28: Takedowns landed by McMann in her last five outings prior to facing Rousey. The Olympic silver medalist’s high during that time occurred when she grounded Raquel Pa'aluhi nine times at ProElite “Arlovski vs. Lopez” on Aug. 27, 2011. She was unable to attempt a single takedown during her abbreviated encounter with the champion.

10-20-1: Combined record of Cummins’ previous four professional opponents. His most recent foe, Willie Smalls, accounts for the majority of that cage time with a record of 5-15-1.

0: Times that Cormier has been taken down in his 14-bout MMA career. Cummins failed on three takedown attempts before losing to the American Kickboxing Academy standout via TKO at the 1:19 mark of the opening frame.

22: Takedowns attempted by Demian Maia in his unanimous decision loss to Rory MacDonald, a UFC welterweight record. However, the Brazilian was only able to land two takedowns over the course of the fight.

.880: Career takedown defense rate for Rory MacDonald following his efforts at UFC 170, moving him past Donald Cerrone and into seventh place in promotion history among those with five UFC appearances and at least 20 takedowns attempted against them.

45: Significant strikes by which MacDonald outlanded Maia in the final two rounds of their fight. Maia held a 27-to-6 edge in the opening frame, but “Ares” picked up the pace over the final 10 minutes, outlanding his foe by a 69-to-24 margin.

.780: Percentage of T.J. Waldburger’s career defeats that have come by knockout or technical knockout. Mike Pyle handed the Texan his seventh such defeat at the 4:03 mark of round three.

3: Third-round stoppages in UFC competition for Mike Pyle. That figure is the second-most in UFC history behind only Randy Couture, who had six.

2-0: Record for the Thompson family this weekend. Stephen Thompson scored a first-round stoppage of Robert Whittaker at UFC 170 on Saturday, and younger brother Evan Thompson took a unanimous decision over Allen Nelson at Legacy Fighting Championship 28 on Friday.

43: Total strikes by which Alexis Davis outlanded Jessica Eye in their women’s bantamweight scrap. Davis, who also held a 53-to-47 edge in significant strikes, captured a hard-fought split decision for her third straight triumph inside the Octagon. Davis outlanded Eye in total strikes in all three rounds, including a 44-to-15 advantage in the second round.

7: Media scorers out of the 16 tracked by MMADecisions.com who scored the bout for Eye.

37: The most significant strikes anyone [Diego Nunes at WEC 49] has landed against Assuncao during his 12-fight tenure in the UFC and WEC. Nine of those fights have gone the distance.

132: Total strikes landed by Serra-Longo Fight Team prospect Aljamain Sterling in his three-round win over Cody Gibson. The CFFC veteran landed 132 of 177 strikes overall, outlanding his foe 48 to 17 in round one, 27 to 13 in round two and 57 to 5 in round three.

11-1: Record in bouts that go the distance for Zach Makovsky, who captured a unanimous verdict against Joshua Sampo in a preliminary flyweight contest. The Philadelphia Fight Factory product’s only loss when going to the judges came via split decision against Anthony Leone at Bellator 83.

11: Takedowns landed in two 125-pound appearances in the UFC for Makovsky. “Fun Size” landed five of seven takedowns in his victory over Sampo. He went 6-for-17 on takedowns in his Octagon debut against Scott Jorgensen in December.

889: Days since Erik Koch’s last victory, a unanimous verdict over Jonathan Brookins at UFC Fight Night 25 in September 2011. “New Breed” made a successful 155-pound foray at UFC 170, stopping Rafaello Oliveira with punches 1:24 into the opening round of their fight. Koch was 5-3 in UFC/WEC competition as a featherweight.