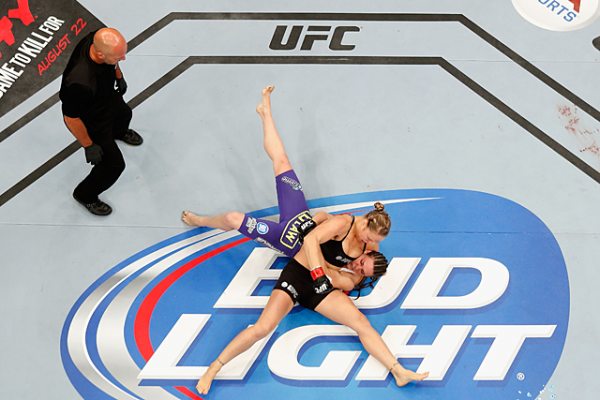 
One champion endured a 25-minute struggle. The other had a considerably shorter evening. When all was said and done, both Chris Weidman and Ronda Rousey retained their respective titles at UFC 175.

Weidman started quickly, and then held on late to capture a unanimous five-round decision against a hard-charging Lyoto Machida in the evening’s middleweight headliner. Meanwhile, Rousey kept her bantamweight crown with a 16-second demolition of Alexis Davis in the co-feature.

It was a night when the UFC needed its champions to deliver, and both did -- albeit via very different methods. Here is a by-the-numbers look at UFC 175, with statistics courtesy of FightMetric.com.

Related: Matches to Make After UFC 175


8: Consecutive victories inside the Octagon for Chris Weidman, the second-longest active streak in the UFC behind reigning light heavyweight champion Jon Jones.

5: Takedowns landed, in 13 attempts, by Weidman. The champ landed three of those takedowns in the third stanza as well as one apiece in rounds two and five.

90: Total strikes landed by Weidman. By comparison, Machida landed 63. The Serra-Longo Fight Team standout outlanded his opponent 10 to 7 in round one, 18 to 7 in round two, 22 to 6 in round three and 31 to 25 in round five. Meanwhile, Machida held an 18-to-9 striking edge in the fourth stanza. Weidman also had a 65-to-58 advantage in significant strikes.

2: Fighters who have win UFC titles in two separate weight classes. Randy Couture (heavyweight and light heavyweight) and B.J. Penn (welterweight and lightweight) are the only two to capture promotional gold in two different divisions. Machida came up short in his bid to become the third two-division champion in the Octagon.

16: Seconds needed by Rousey to defeat Davis, the second fastest KO/TKO in a UFC title bout and the fastest of her career. Andrei Arlovski’s 15-second knockout of Paul Buentello at UFC 55 remains the fastest knockout in a championship affair. “Rowdy” has previously posted 25-, 49-, 39-, 54- and 58-second victories during her pro tenure.

2: Consecutive knockout victories for Rousey, who also stopped Sara McMann with a knee to the body in 66 seconds at UFC 170. The Californian’s first eight triumphs came via armbar.

42: Significant strikes landed by Uriah Hall in his unanimous decision win over Thiago Santos. “The Ultimate Fighter 17” competitor, who suffered a gruesomely broken toe, landed 16 leg kicks in the contest.

318: Days since it was announced that Stefan Struve would be sidelined indefinitely after being diagnosed with a leaking aortic valve and an enlarged heart. “Skyscraper” was cleared to compete against Matt Mitrione at UFC 175, but the matchup would be canceled when Struve suffered a near-fainting spell backstage prior to the fight. Struve last competed at UFC on Fuel TV 8 in March 2013.

2:12:30: Total bantamweight fight time in the UFC for Urijah Faber, No. 1 in the division. The Team Alpha Male leader needed a total of 11:09 to dispatch Caceres, pushing him past Takeya Mizugaki (2:09:30) into the top spot.

18: Takedowns landed at bantamweight by Faber, moving him past Dominick Cruz (14), Mizugaki (16) and Demetrious Johnson (16) for first place in the division. “The California Kid” went 5 for 12 on takedowns before submitting Alex Caceres.

6: Submission wins for Faber at bantamweight in UFC/WEC competition, tying him with Renan Barao and Brian Bowles for most in the history of those promotions. The former WEC 145-pound king also has six tapout victories at featherweight, which is also a UFC/WEC best.

13: Finishes overall in UFC/WEC competition for Faber, tying him with Vitor Belfort, Nate Diaz and Matt Hughes for most in the combined history of the two promotions. Anderson Silva is first with 14 finishes.

135: Total strikes landed by Kenny Robertson in his unanimous decision triumph against Ildemar Alcantara, who, by comparison landed just 25. Robertson held his greatest advantage in the opening frame, when he outlanded his Brazilian foe 58 to 4.

17: Significant strikes by which Chris Camozzi outlanded Bruno Santos in their middleweight tussle. However, Camozzi, who outlanded his opponent by 22 total strikes, was taken down four times over the final two rounds and lost a split decision.