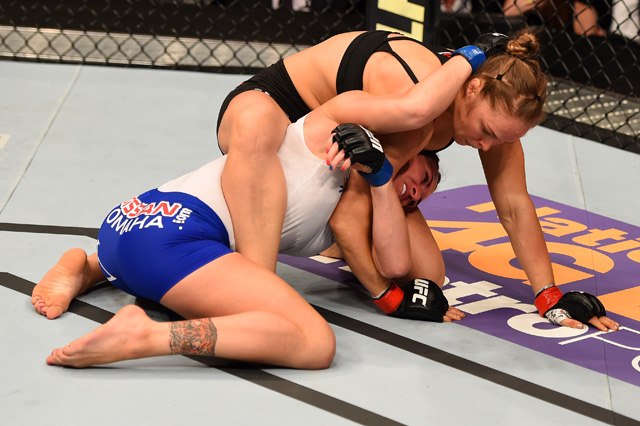 
Ronda Rousey continues to raise the bar -- or apply it, if you prefer.

The women’s bantamweight champion barely broke a sweat in the UFC 184 headliner, tapping out Cat Zingano with an armbar 14 seconds into the first round at Staples Center in Los Angeles on Saturday night. The Olympic judoka only grows more efficient with each Octagon appearances, and the list of potential challengers is growing thinner by the month.

With such a dominant champion comes plenty of statistical superlatives. Here is a by-the-numbers look at UFC 184, with statistics courtesy of FightMetric.com.


14: Seconds needed by Rousey to submit Zingano with an armbar in the first round of the bantamweight title encounter. That is the fastest submission in modern Ultimate Fighting Championship history, surpassing Marcus Aurelio’s 16-second submission of Ryan Roberts at UFC Fight Night “Florian vs. Lauzon” in April 2008. Rousey’s victory is also the fastest finish of any kind in a UFC championship bout.

7: Armbar submission victories in UFC/Strikeforce competition for Rousey, the most in the combined history of the two promotions. That figure also ties her for No. 1 all-time in UFC/Strikeforce/Pride Fighting Championships/World Extreme Cagefighting history with Antonio Rodrigo Nogueira .

5: Consecutive finishes in title fights for Rousey, which ties a UFC record. In addition, her five straight championship defenses tie her with Demetrious Johnson for third-most title defenses among current UFC champions behind Jon Jones (eight) and Jose Aldo (seven).

3:29: Average fight time for Rousey, the fifth shortest in UFC history among those with a minimum of five bouts. The Olympic judoka dispatched Zingano in 14 seconds at UFC 184, the quickest triumph of her 11-bout pro career.

6: Fighters in modern UFC history who have begun their UFC tenures with five straight victories via knockout, technical knockout or submission. Rousey joined that club by tapping out Zingano on Saturday.

5: Bantamweight UFC appearances for Rousey, tying her with Miesha Tate and Jessica Andrade for most in the division.

0: Takedowns landed in five attempts by Pennington. Holm’s takedown defense was a major question heading into her UFC debut, but “The Preacher’s Daughter” was able to keep the fight upright throughout.

3: Combined UFC fights for co-main event competitors Holm and Pennington heading into Saturday night. Holm was making her Octagon debut, while “The Ultimate Fighter 18” veteran Pennington was 2-1 with the Las Vegas-based promotion entering the bout.

1: Submission triumph in 13 UFC appearances for Jake Ellenberger, who scored the first such victory of his Octagon tenure by tapping out Josh Koscheck with a modified north-south choke 4:20 into the second round of their welterweight encounter.

3: North-south choke submission finishes in UFC history. Ellenberger joined Jeff Monson and Rani Yahya as the only fighters to accomplish the feat.

40: Career takedowns for Koscheck, tying him with Ryan Bader for No. 9 among active fighters in the UFC. “The Ultimate Fighter 1” alum landed one takedown in six attempts against Ellenberger.

13: Fighters in UFC history to have earned a knockout or technical knockout victory from a standing elbow strike after Alan Jouban accomplished the feat with his first-round stoppage of Richard Walsh in a featured welterweight clash.

2: Submission losses in 44 career bouts for Gleison Tibau, who tapped to a Tony Ferguson rear-naked choke in the opening frame of their lightweight contest. The Brazilian’s only other submission defeat came against Joe Stevenson at UFC 86.

4:51:15: Total fight time in the UFC for Gleison Tibau, No. 2 among active fighters in the promotion behind only Frankie Edgar (5:10:21). The American Top Team product logged 2:38 in the Octagon against Ferguson at UFC 184.

3: Significant strikes landed by Mark Munoz in his last three UFC outings, first-round losses to Lyoto Machida, Gegard Mousasi and Roan Carneiro. “The Filipino Wrecking Machine” failed to land a significant strike before succumbing to a rear-naked choke from Carneiro 1:40 into the first round of their middleweight contest.

2,366: Days since Carneiro’s last Octagon appearance, a split-decision setback against Ryo Chonan at UFC 88. Including his triumph over Munoz, “Jucao” has now won six straight fights.

1,736: Days since Norifumi Yamamoto’s last victory, a knockout of Federico Lopez at Dream 14 in May 2010. Yamamoto failed to get back into the win column against Roman Salazar, as an inadvertent eye poke from the Japanese fighter led to the bout being ruled a no contest.

2: Knockdowns landed by Tim Means in his first-round knockout victory over Dhiego Lima at welterweight. A punch to the head in the clinch brought an end to the bout 2:17 into the initial stanza.

101: Significant-strike deficit for Ruan Potts in his three Octagon appearances, all KO/TKO defeats. Derrick Lewis outlanded the South African heavyweight 53 to 7 in significant strikes en route to a stoppage 3:18 into round two on Saturday night. Potts has also been outlanded 161-60 in total strikes during that time.

87: Significant strikes landed by both James Krause and Valmir Lazaro in their lightweight bout, which Lazaro won via split decision. Krause held a 98-to-87 advantage in total strikes landed.

0: Takedowns landed, in 10 attempts, by Krause.