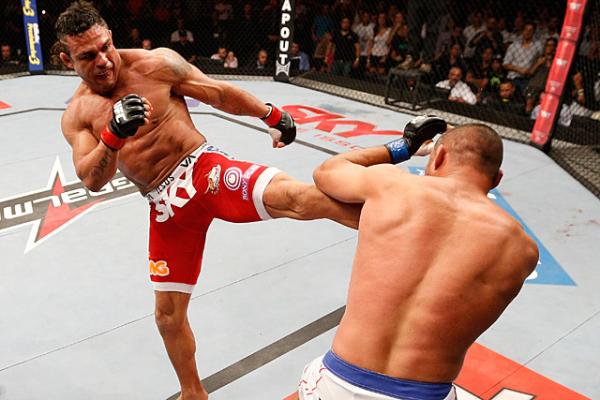 Should Vitor Belfort get a title shot? Please tell us below. | Josh Hedges/Zuffa LLC/Getty Images


Vitor Belfort might very well be the scariest man in mixed martial arts.

“The Phenom” knocked out the usually granite-chinned Dan Henderson with a head kick 1:17 into the opening round of their UFC Fight Night 32 main event bout. With the win, Belfort becomes the first man to stop Henderson with strikes and in the process, makes it nearly impossible to deny him a title shot --even if his most recent triumph came at 205 pounds instead 185.

Finishes were the theme of the evening at the Goiania Arena in Goias, Brazil, on Saturday night, as nine bouts ended before their allotted time limit. Belfort’s effort was by far the most emphatic and dramatic, putting a fitting cap on a violently entertaining event. Here is a by-the-numbers look at UFC Fight Night 32, with statistics courtesy of FightMetric.com.

13: UFC finishes for Belfort, tying him with Matt Hughes for No. 2 all-time in the promotion. Former middleweight champion Anderson Silva is first with 14 finishes. Twelve of Belfort’s finishes have come inside of a round.

3: Head-kick knockouts in the Octagon for Belfort. “The Phenom” is the only fighter in UFC history to have three such knockouts, finishing Michael Bisping, Luke Rockhold and Henderson with head kicks in his last three outings.

5: “Knockout of the Night” bonuses garnered by Belfort during his UFC tenure. The Blackzilians product passed Chris Leben, Roy Nelson and Lyoto Machida for the second most KOTN awards in promotion history. Anderson Silva is at the top of the list with seven.

2,576: Days since the initial meeting between Henderson and Belfort, a unanimous decision victory for “Hendo” at Pride 32. Henderson is 8-6 since that bout, while Belfort is 10-2.

39: Professional bouts for Dan Henderson without suffering a knockout or technical knockout loss. In his 40th pro appearance, the 43-year-old Californian was stopped by strikes for the first time in his career.

9: Bouts that ended via knockout, technical knockout or submission on Saturday night. Only two bouts, Cezar Ferreira-Daniel Sarafian and Ryan LaFlare-Santiago Ponzinibbio, went the distance. The most finishes at a UFC event in the modern era is 10, which happened at UFC Fight Night 13 and UFC on Fuel TV 10.

4-6: Record for Brazilians facing foreign opponents at UFC Fight Night 32. It is the first time fighters from the South American country have posted a losing record in a UFC card held on their home soil.

26: Total strikes by which Ferreira outlanded Sarafian in the final round of their middleweight clash. The first two rounds were much closer, with “Mutante” holding a 13-9 edge in round one and Sarafian outlanding his foe 16 to 11 in round two.

100: Percentage of Cavalcante’s 17 fights -- 12 wins, four losses, one no contest -- that have concluded inside of three rounds. “Feijao” kept his streak alive by stopping Igor Pokrajac 1:18 into round one of their light heavyweight contest on Saturday night.

11: First-round finishes, including two in the Octagon, for Brandon Thatch, who stopped Paulo Thiago with a vicious knee to the body in their welterweight encounter. The Elevation Fight Team member scored a TKO over Justin Edwards 1:23 into round one at UFC Fight Night 27 in his promotional debut.

14:43: Total fight time for Thatch in his 11 career triumphs. The quickest finish came when he dispatched Patrick Vallee in 15 seconds at Instinct MMA “Instinct Fighting 2” on Dec. 2, 2011 -- one of four sub-20 second stoppages for “Ruckus.” Danny Davis, who succumbed to a rear-naked choke 4:12 into the opening frame against Thatch at Ring of Fire 39, lasted the longest.

2: Submission victories that have occurred due to body strikes in UFC history. Thiago become the second after tapping against Thatch. The first instance occurred when Cheick Kongo used elbows to the body to force Paul Buentello to submit in a heavyweight matchup at UFC Live 1.

6,181: Days since a UFC event last held an event that featured two submissions as a result of strikes. At Ultimate Ultimate 96, Tai Bowden earned a round-one submission against Jack Nilson due to headbutts, while David “Tank” Abbott forced Cal Worsham to tap to punches at the Alabama State Fair Arena in Birmingham, Ala., in December 1996. At UFC Fight Night 32, Cavalcante and Thatch earned submission victories via strikes.

109: Total strikes landed by Ryan LaFlare. His opponent, Santiago Ponzinibbio, landed just 32. LaFlare also landed five takedowns in 10 attempts en route to a unanimous decision victory. LaFlare’s striking and takedown totals were the most of any fighter on Saturday.

40: Seconds needed by Jeremy Stephens to knock out Rony Mariano Bezerra in his 145-pound debut. It was the fifth fastest knockout in UFC/WEC featherweight history. Chan Sung Jung’s seven-second knockout of Mark Hominick at UFC 140 holds the top spot.

12: Career submission victories for Thiago Tavares, who tapped Justin Salas with a rear-naked choke 2:38 into their lightweight clash. The Brazilian began his pro career with 11 straight victories, including nine via submission. Since then he is 6-5-1, with two triumphs by way of submission.