Demetrious Johnson fought like a man with something to prove. In his first meeting with Ian McCall at UFC on FX 2 in March, many felt that he would have lost had the bout gone to a sudden victory frame. With McCall’s dominant third round the lasting image of their initial meeting, “Mighty Mouse” entered their rematch at UFC on FX 3 as an underdog in the minds of many.

He exited the Bank Atlantic Center in Ft. Lauderdale, Fla., as a flyweight tournament finalist, exhibiting solid striking and wrestling in earning a unanimous decision over the former Tachi Palace Fights champion. The little guys tend to rack up the numbers in bunches, and Friday night was no exception. Here is a by-the-numbers look at the UFC on Fox 3 card, with statistics provided by FightMetric.com.

33: Significant strike advantage for Johnson in his unanimous decision triumph over McCall. “Mighty Mouse” used his blinding speed to land more significant strikes than McCall in each frame: 22 to 13 in round one, 32 to 20 in round two and 36 to 24 in round three.

.590: Significant striking accuracy for Johnson, well above his normal rate of 49 percent. By comparison, McCall connected on 43 percent of his significant strikes, which was also above his career mark of 37 percent.

1: Successful takedown in 11 attempts for McCall. One of the keys to his success in his first bout with Johnson was wrestling, as he executed four takedowns during their March meeting. This time, Johnson improved his defense while landing two takedowns of his own -- he had none against McCall in Sydney.

341: Total strikes thrown by Johnson and McCall combined. “Mighty Mouse” landed 105 of his 169 strikes in his victory, while “Uncle Creepy” connected on 94 of his 172 strikes. The two combatants were slightly off the pace of their first matchup at UFC on FX 2, when they threw a combined 404 strikes.

46: Difference in total strikes landed by McCall in the third round against Johnson on Friday night (37) and in their first meeting (83). The final frame was McCall’s most dominant in March, as he nearly finished his opponent before time expired. This time, Johnson was able to get the better of “Uncle Creepy” in the decisive stanza. 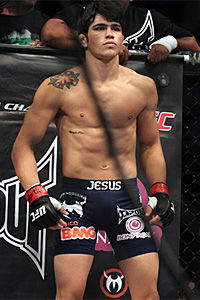 Erick Silva File Photo
Silva may be a future star.
5:42: Total fight time accumulated by Erick Silva in three UFC bouts. He needed 4:09 to submit Charlie Brenneman with a rear-naked choke in their welterweight matchup, by far the Team Nogueira representative’s longest Octagon appearance to date. In his first two outings, the Brazilian fought for just 69 seconds combined in a victory over Wilson Ramos and a controversial disqualification defeat by Carlo Prater.

17-2: Record for Josh Neer in bouts that have ended by knockout or technical knockout. “The Dentist” suffered only the second loss of his 45-fight career via strikes when a Mike Pyle right hand ended his night at 4:56 of the opening frame in their welterweight clash.

1: Knockout loss in 19 professional bouts for Scott Jorgensen, who was floored by a right cross and finished with follow-up punches by Eddie Wineland at 4:10 of the second round in their bantamweight tussle. “Young Guns” had previously been finished only once in his career, an armbar submission loss to Joe Jesser at a Ring of Fire event in 2006.

26: Difference in significant strikes landed by Wineland in UFC losses to Urijah Faber (11) and Joseph Benavidez (24), and the number he landed in his victory over Jorgensen (61). Wineland has never been outstruck in victory while fighting for the WEC and UFC.

2: Takedowns by Wineland opponents -- both by Faber -- in his last seven bouts, dating back to a victory over Manny Tapia at WEC 43. Jorgensen failed on all four of his takedown attempts against the Indiana native.

4: Consecutive split decisions inside the Octagon for Mike Pierce, who is 2-2 in those contests. The Oregon native controlled his UFC on FX 3 bout with Carlos Eduardo Rocha, but one judge inexplicably awarded the Brazilian a 30-27 scorecard. Previously, Pierce had dropped split decisions to Josh Koscheck and Johny Hendricks, while topping Paul Bradley by the same ruling.

90: Total strikes landed in rounds two and three combined by Lance Benoist in his split decision defeat to Seth Baczynski. The Missouri native outlanded “The Polish Pistola” by 60 strikes in those two rounds. Things were much closer in round one, with Benoist holding a 24-to-20 edge in total strikes.

136: Total strikes landed by Matt Grice in his dominant decision triumph over Leonard Garcia. Grice outlanded the Jackson’s MMA product 61 to 2 in significant strikes and took his opponent down in every round to earn his first UFC victory since 2007.

3-6-1: Record for Garcia since his first-round knockout of Jens Pulver at WEC 36 in November 2008. All three of his victories during that time -- Jameel Massouh, Chan Sung Jung and Nam Phan -- were split decisions.

.722: Percentage of Tim Means’ 18 career victories that have come by knockout or technical knockout. After notching a unanimous decision against Bernardo Magalhaes in his Octagon debut, “The Dirty Bird” returned to his usual form, landing 26 significant strikes before his lightweight bout with Justin Salas was stopped at 1:05 of the opening round.

54: Total strikes by which Buddy Roberts outlanded Caio Magalhaes in the UFC debut for both men. Roberts outstruck his Brazilian opponent in each round and successfully defended 13 of Magalhaes’ 15 takedown attempts in the middleweight clash.