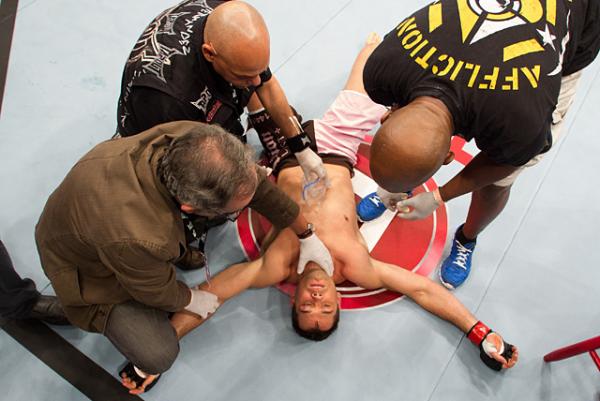 Rich Franklin lays on the canvas after being knocked out by Cung Le. | Josh Hedges/Zuffa LLC/Getty Images


Cung Le entered the Octagon at CotaiArena in Macau a heavy underdog, but he walked out with the most significant victory of his MMA career.

The former Strikeforce champion put a sudden and violent end to Rich Franklin’s hopes of a second reign as UFC 185-pound king, knocking out the Ohioan with a perfectly placed right hand in the UFC on Fuel TV 6 main event on Saturday.

Le provided an emphatic conclusion to an event sorely lacking in finishes, and in doing so left his own indelible mark on the UFC’s first visit to China. Meanwhile, Franklin will have to take time to evaluate his career once he recovers from what was a stunning and disappointing loss. Here is a by-the-numbers look at UFC on Fuel TV 6, with statistics provided courtesy of FightMetric.com.

8: Knockout or technical knockout finishes among 9 career victories for Le, who toppled Franklin to earn his second Octagon win. Of Le’s 11 professional fights, only his UFC 148 win over Patrick Cote has gone the distance.

2:17: The official time of Le’s knockout victory, the quickest anyone has finished Franklin during his 37-fight professional career. Anderson Silva has the second fastest finish of “Ace,” stopping the former middleweight king in 2:59 at UFC 64.

3: Occasions where Le landed less than 10 significant strikes in victory. The San Shou specialist landed eight in his knockout of Franklin, two in a first-round stoppage of Jason Von Flue and eight in an opening frame TKO of Mike Altman.

6: Years since Thiago Silva’s last true submission victory, when he forced Dave Dalgliesh to tap to a heel hook in the first round at Fury FC 1 “Warlords Unleashed.” Silva submitted an exhausted Stanislav Nedkov with an arm-triangle choke at 1:45 of round three on Saturday.

112: Total strikes landed by Silva during the light heavyweight scrap, despite spending much of the contest with his back against the cage. Nedkov landed just 24 total strikes, but he also scored the fight’s only knockdown in round two.

12: Total strikes attempted by Paulo Thiago in his one-sided loss to Dong Hyun Kim. The Brazilian neither landed nor attempted a single strike in round one and went 0 for 5 on striking attempts in the final frame. Meanwhile, Kim landed 76 of his 104 strikes in a dominant performance.

3: Takedowns landed by Kim, the most anyone has landed against Thiago in a UFC bout since Jon Fitch had four takedowns against him at UFC 100. No one else has had more than two against the Brazilian in UFC competition.

.520: Significant striking accuracy for Mac Danzig, who fell to Takanori Gomi via split decision in a lightweight tussle. By comparison, Gomi landed 39 percent of his significant strikes.

51: Total strikes by which Jon Tuck outlanded Tiequan Zhang in rounds one (30 to 5) and two (39 to 13) of their lightweight encounter. Tuck, who was outlanded 28-22 by Zhang in the final frame, won the bout via unanimous decision.

1,435: Days since Takeya Mizugaki last posted consecutive wins in mixed martial arts competition. The WEC veteran’s victory over Masahiro Oishi in 2008 was his fifth straight at the time -- since then, Mizugaki has alternated wins and losses in 10 bouts under the Zuffa umbrella.

13-2: Record for Motonobu Tezuka in fights that went to the judges, including his split-decision defeat at the hands of Alex Caceres. Tezuka’s only other decision defeat came against Shintaro Ishiwatari in 2011, also a split verdict.

16: Bouts, in 25 professional appearances, that have gone the distance for American Kickboxing Academy product Riki Fukuda. The Deep veteran took a unanimous decision over Tom DeBlass to kick off the UFC on Fuel TV 6 card -- his fourth three-round affair in as many UFC outings. The Japanese fighter is 11-5 in fights that go to the judges.