Who will emerge as the WEC’s 155-pound champion Sunday in San Diego is subject to heated debate, but one thing is for sure: Champion Jamie Varner is entering the cage against Donald Cerrone with a ton of confidence.

“I can beat Donald anywhere,” said Varner (15-2, with two no contests), who is making his second title defense. “I can beat him on my feet, on my back or even out in the parking lot. That being said, Donald is strong on his feet and on the ground. But I’m stronger than him in all areas except kickboxing. His kickboxing is better than mine, but it’s not far off. If he wants to stand, it will be a short night for him.”

Cerrone (9-0, one no contest), in contrast, said Varner isn’t tough enough to hang on to his championship.

Varner, a member of the Arizona Combat Sports camp, won his championship with a third-round knockout* of “Razor” Rob McCullough at WEC 32 in February. He then defended his title with another first-round KO, taking out Marcus Hicks in 2:08 at WEC 35 in August.

“Jamie’s had a long camp,” said Trevor Lally, Varner’s trainer at ACS. “He’s been in camp more than eight weeks for this fight and has been doing more sparring and jiu-jitsu work to get ready. He eats, sleeps and breathes fighting.

“Jamie’s strongest aspect is that he’s very clean all the way around. He’s strong on the feet, strong on the ground and he works harder than 99 percent of the fighters out there. If you think he’s going to shoot, you have to watch out for his hands. Plus, he gets stronger as the fight goes on.” 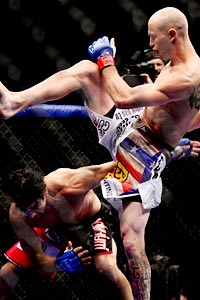 Photo by Sherdog.com
Is Cerrone ready for a title
shot? We'll see on Sunday.
Cerrone, a member of Greg Jackson’s Mixed Martial Arts Academy in New Mexico, earned his title shot by winning a unanimous decision over McCullough at WEC 36 in November. It was his second fight since serving a nine-month suspension for testing positive for a diuretic following his victory over Kenneth Alexander in September 2007.

“The time off was a blessing in disguise,” said Cerrone. “Before (the suspension), everything was coming so fast for me and having to sit out gave me a chance to work on my wrestling and submission skills. I worked every day while I was out, and it let me be where I am now.”

Jackson said the 25-year-old Cerrone is still a work in progress and his potential is almost limitless.

“The great thing about Donald is that as amazing a fighter as he already is, he can still get better,” said the world-renowned trainer. “He’s a great fighter and extremely coachable. He’s not near his peak yet.”

To get ready for Varner, Cerrone has been training in Montreal with UFC welterweight champion Georges St. Pierre, who is preparing for a fight with B.J. Penn at UFC 94 on Jan. 31.

“It’s been awesome training with GSP,” said Cerrone. “He’s been through all of the stuff I’m going through right now. He’s taken me under his wing, and I’m doing everything he is, so I know I’m getting ready for this fight the right way.”

In addition to having eight submissions in his nine wins, Cerrone holds a 25-0 amateur kickboxing record and wouldn’t mind the fight turning into a slugfest.

“I’m a solid boxer and I have a lot of confidence in my ground-and-pound,“ he said. “If Jamie wants to stand and bang, that’s good. I’d rather we just draw a line in the sand and bang it out.”

Jackson said that both fighters’ skills cancel each other out and that the outcome could be decided by one small mistake.

“I think this fight is going to be a technical war,” Jackson said. “Both fighters are solid all the way around, and we’re looking forward to the challenge. It’s going to come down to the little things and which fighter can stick to his game plan better. Whoever is the better man will win the title.”

Lally is confident enough in Varner that he predicted an early ending to the fight in the champ’s favor.

“Jamie’s a tough guy,” said Lally. “He’s not afraid to fight, whether it’s in the standup or on the ground. I don’t think Donald has ever fought anybody like Jamie. If Jamie doesn’t hold back, his only enemy is himself.

“I think Jamie’s going to win by KO or choke. I want to say about halfway through the second round. There’s no way it’s going to a decision.”

Varner points to the differing results against McCullough as a reason to expect him to keep his title.

“I’m going to put Donald to sleep. It’s not going past the second round.”

Correction notice (Jan. 24, 12:08 a.m. EST):
Sherdog.com incorrectly wrote that Varner stopped McCullough in the first round, when in fact it was the third frame.